"It's really fun": EWU creates pandemonium on defensive play by jumping and yelling

The Eags have a play called "Deep" where they start jumping and yelling on the sidelines. In a season during a pandemic, it might be more important than ever. 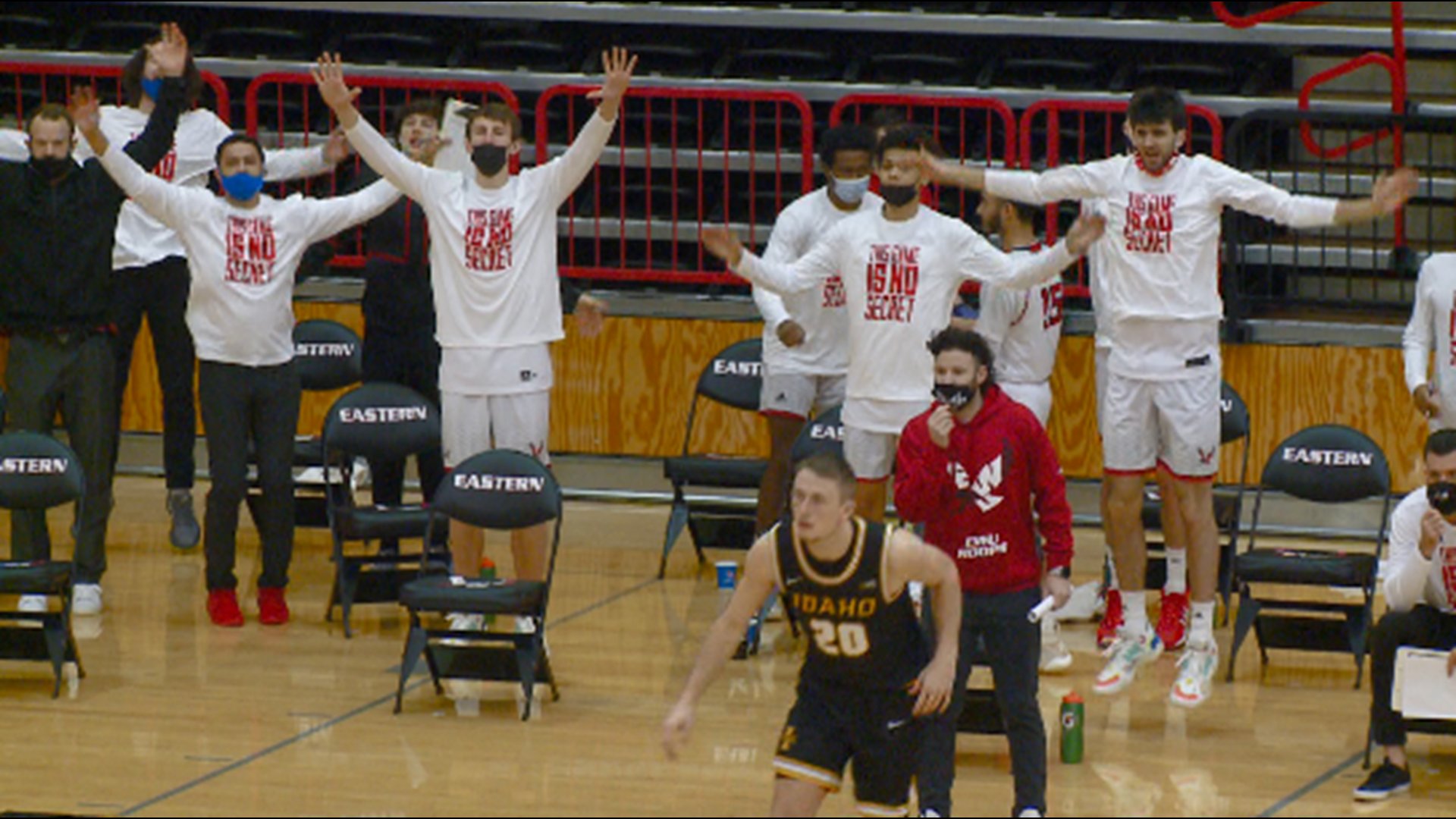 CHENEY, Wash — In a basketball season with no fans due to the pandemic, creating your own energy is vital.

Eastern Washington men's basketball is doing just that with a defensive play that they've used for a couple years;

The play is called "Deep" and it happens every time the opponent inbounds the ball underneath the basket. It starts with the bench going absolutely bananas as they jump and scream causing pandemonium. It's followed by defensive strategy.

"We call it Deep because we want the other team to throw it deep," assistant coach Bobby Suarez said. "The guy is underneath the basket, he can't move and it's a five against four right there."

Suarez is the one who suggested using the play at Eastern two years ago. He got the idea from he school he worked at before, Florida State.

"It's exciting, it brings pace to the game and maybe it helps us get out for a dunk or an easy look," he said.

The point is to force the opposing team to inbound the ball by throwing it up around the three-point line or further like a jump ball. The guard who is playing back then has an opportunity to steal it and get points off turnover for the Eags,

"You know Bobby was like this is something we should do," head coach Shantay  Legans said.. "Because earlier in that first year we were getting scored on a little bit on inbounds plays and picking up fouls."

It has surely made a difference in a big way.

"Last year I think about 20 percent of possessions we got turnovers on it, which ranked top 10 in the country," Suarez said. "So we take pride in it."

They take so much pride in it, even Legans is jumping up and down to try and help force turnovers.

Of course the players are all in on it.

"I remember being a redshirt freshman and everyone kind of stood up and was going crazy," guard Michael Meadows said. "So I jumped up and started going crazy with them you know? It's really fun, I love it. We got a great group of guys who bring a lot of energy so that helps us a lot."

Of course other teams hate it, So much so that they'll complain about it and get the refs to make Eastern tone it down. The Eags love they get under their opponents' skins.

"We are bringing energy that some people don't like, and that's okay," Meadows said. "It's a competitive sport. I love it."

It's been a perfect mix of defensive strategy and a way to jump around to stay energized.

"It's crazy going into these games," Suarez said. "There is no sound, there are no fans, no applause. So bringing your own energy is huge all year."