Idaho kept in-person classes during the COVID-19 pandemic. One Spokane football player decided the opportunities were enough to transfer schools. 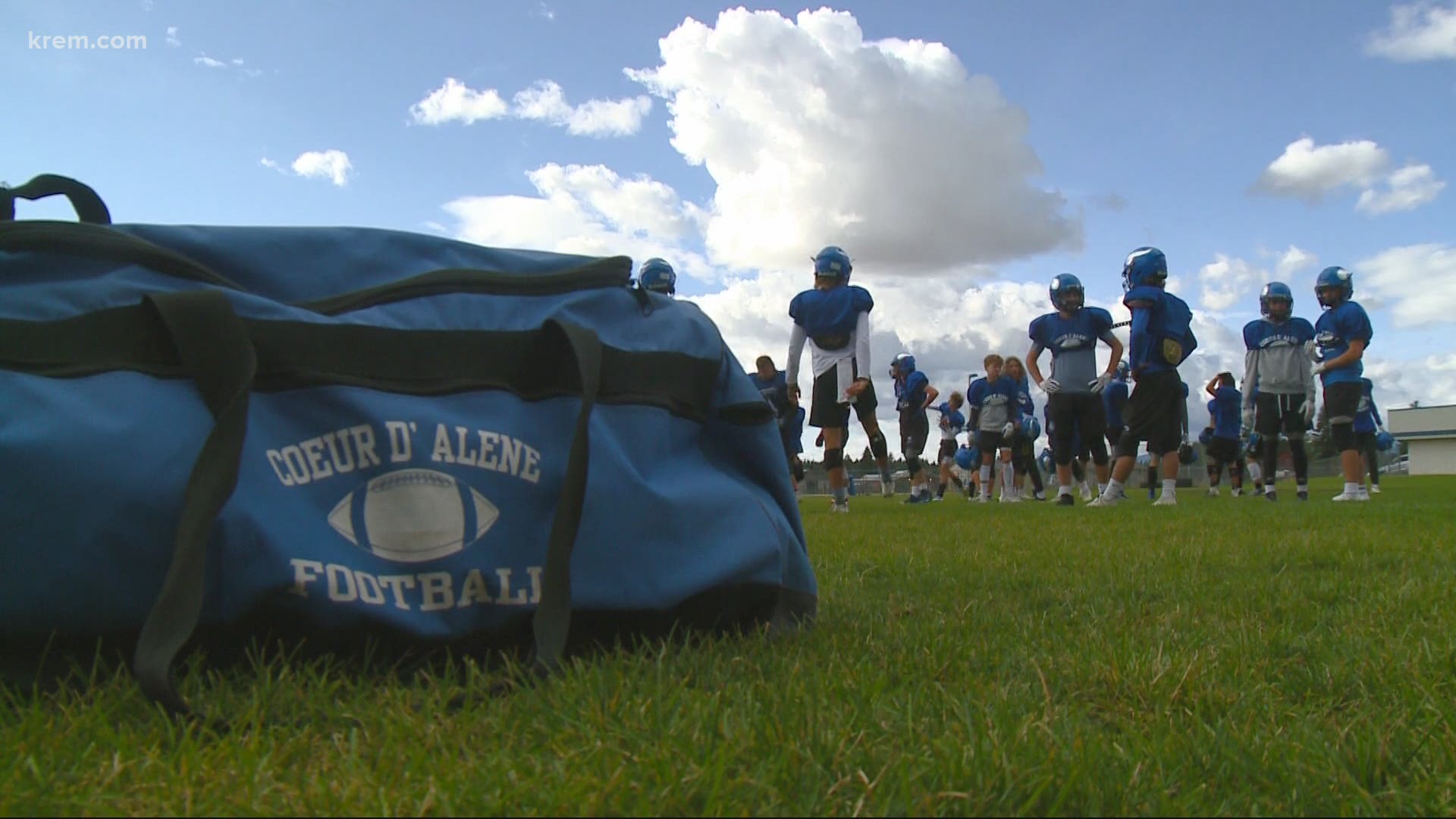 SPOKANE, Wash. — With Washington high school football postponed until February 2021, at least one Spokane player transferred to a Coeur d'Alene high school for academics, and now finds himself able to play football again.

As the COVID-19 pandemic surged across the nation over the summer, several states like Washington, California and Oregon postponed the high school football season.

National media outlets like ESPN and the Washington Post documented what happened next; players eager to play picked up and moved to states with fewer restrictions.

Idaho is one such state.

“We’re very fortunate to be able to play,” said Coeur d’Alene High School Football Coach Shawn Amos. “And I feel terrible for those kids over there and their coaches.”

Due to the pandemic, the Vikings’ season was shortened and non-conference games were cancelled, but league play continued.

“These kids need it,” Amos said. “The community needs it, some sort of normalcy, and we’ve had almost zero football-related COVID issues.”

At a recent mid-week practice, life for the high school squad did appear normal. The team ran through drills, worked on plays and just enjoyed being together.

The only obvious clue that this year is different was a team manager taking each player's temperature as they arrived at the practice field.

RELATED: Here's where to get tested for COVID-19 in Spokane County, North Idaho

When the Washington Interscholastic Activities Association, the state’s governing body for high school sports,  announced over the summer that Fall sports like football would be postponed several months, Amos said that he and other coaches predicted that north Idaho schools would see a wave of transfers from Spokane area high schools as kids looked to play.

“It was a lot to do about nothing. Everybody was pretty nervous about it, but we didn’t see it up here," Amos said.

In fact, there is only one player on the Vikings’ roster this season who transferred in from Spokane. His name is Isaiah Griffin.

“It was tough at first. I’m still meeting new people, but it should be good,” Griffin said.

Griffin is a junior on this year’s squad. He plays receiver on offense, cornerback on defense and returns kicks for the Vikings. He played his freshman and sophomore years at Gonzaga Preparatory School in Spokane.

“The hardest part was probably leaving all of my friends,” Griffin said. “We like to call it at my house, the ‘Land of Familiar.’ Leaving that [and] coming here where I don’t know too many people … that was tough, but it’s all good now.”

Griffin  and his family said their decision to transfer wasn’t solely based on football. Rather, their desire for Isaiah to get in-person instruction was the main factor in the move.

“It was tough for all of us to make the decision,” Isaiah’s mom, Stephanie Griffin, said. “But, I think it’s a good decision. He’s in class, he’s in school, you know. Along with his junior year in sports, it’s an important year academically.”

Isaiah’s dad, James Griffin, said the fact his son is able to play this season was an added bonus.

“Football was just the icing on the cake. And, we were like, 'Oh yeah, we’ll be able to do that too? Lets go forth',” he said.

As for Isaiah, he dreams of playing football in college. He’s hopeful that his play and highlights from this season will land him on the recruiting radar before his senior year.

“Oh yeah, junior year, recruiting year. It would have sucked to miss out on this year," Isaiah said. “It’s cool that I’m able to play. Like, I’m thankful for the opportunity”

KREM 2 reached out to the Idaho High School Activities Association to find out how many students transferred from Washington to Idaho this Fall. The organization’s executive director Ty Jones said that they don’t calculate those figures until the end of the year.

Anecdotally, he said that the larger North Idaho schools have seen transfers from Washington, but he added that in “90 percent of the cases” the students transferred for “academic reasons.”

Jones added that students seeking to transfer and play high school sports need show the move is for a “bona fide” reason before they’re granted eligibility to play.  These reasons include a family moving permanent residences from another state into Idaho.

The Transfer rules are laid out in section 8-14-1 of the IDHSAA’s Transfer guidelines located here:

Meantime, across the state line in Spokane, stadiums like Joe Albi remain empty. Longtime Greater Spokane League coach Tom Yearout said this year has been unlike anything he’s experienced.

“This is first Fall without football, high school coaching since ’88,” Yearout said.

Yearout is the head football coach at Ferris High School. He said that not playing this fall has been tough on players, coaches and the student body as a whole, especially with games taking place 30 minutes away in Idaho.

“I know it’s really hard on Fridays when [the players] watch. Ten miles away, there’s games going on,” Yearout said. “And I’ve heard from kids that they tried to go to the first game {in Idaho} and they just couldn’t handle it. I mean, it’s hard because so much of what happens at school in the Fall is centered around football.”

Right now, Ferris and other Greater Spokane League schools are slated to start playing in February.  Yearout is hopeful, especially for his seniors, that the WIAA won’t change course.

“My main hope is that they get to leave with the high school football experience,” Yearout said.

An experience that Coeur d’Alene Head Football Coach Amos is happy his team and community is able to have.

”We’re just happy to be playing. I’m glad these kids are getting out and able to do this and experience some high school football,” Amos said “[It’s] Something you never get back.”