"We deserve our health and mental health to be taken as seriously as the men," said Okanogan native Jill Townsend. 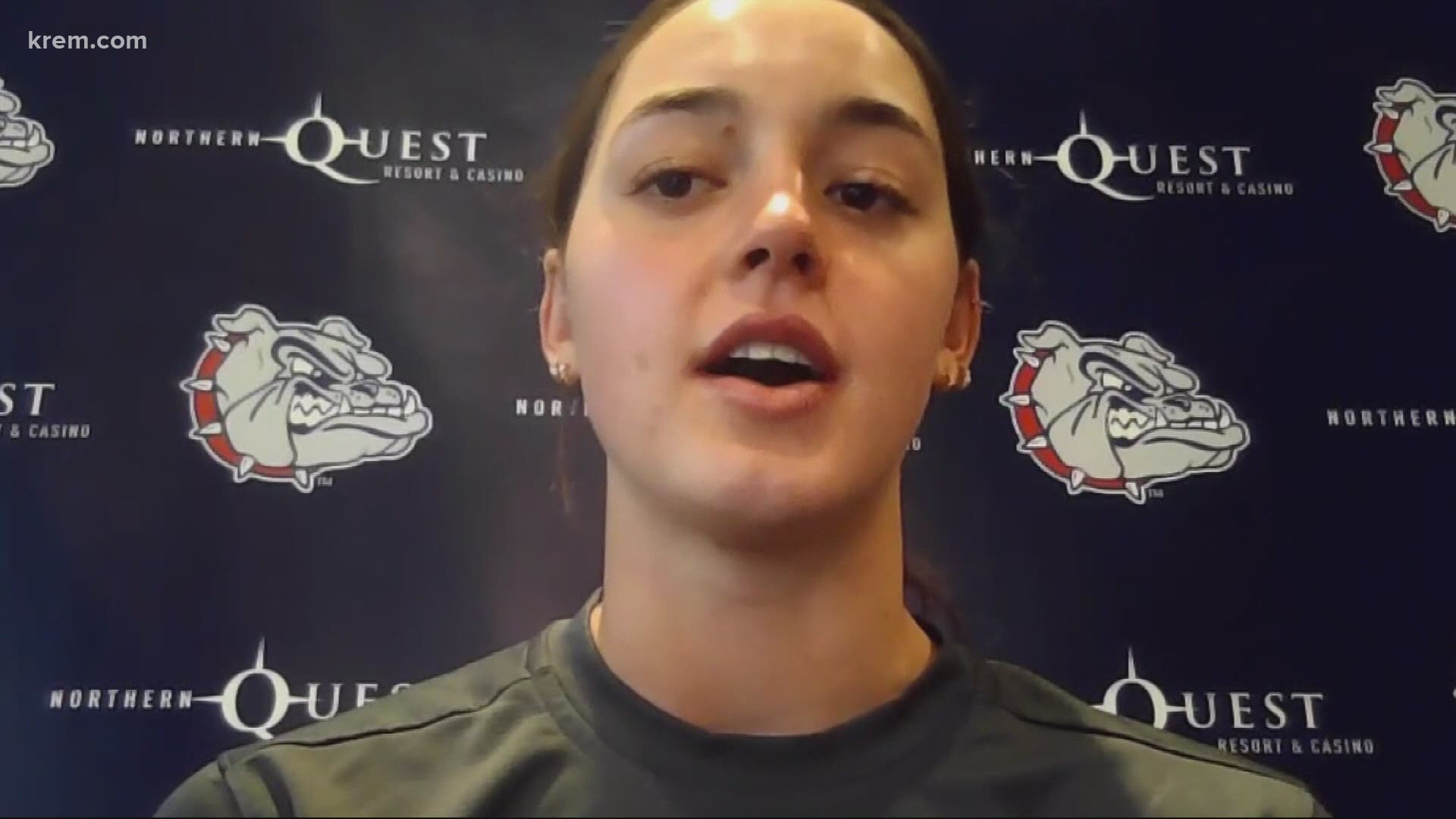 SAN ANTONIO — When the Gonzaga women went to their first weight lifting session in San Antonio, they immediately had to scramble.

The lone weight rack with twelve weights that was provided was hardly enough for their sixteen players' weight training needs.

Trainer Mike Nilson, who was a member of the Zags' legendary 1999 NCAA Tournament team, had to make some quick revisions and get to work.

"When we walked in and saw the weight room situation, he said, 'You can make gains or you can make excuses, but you can't make both,'" recalled forward Jenn Wirth of the moment.

The disparities between the men's and women's bubbles have been much talked about over the past 24 hours. While the women have a lone weight rack at practice sites, the men have a full weight lifting room.

Let me put it on Twitter too cause this needs the attention pic.twitter.com/t0DWKL2YHR

The swag bags have also been discussed at length, as the men received much more gear than the women.

From what I have been shown it appears the swag bags that the Men receive from the @NCAA are much more substantial than the Women as well. @ncaawbb @marchmadness. C'mon NCAA do better. Be better! pic.twitter.com/tDRjI9e5UJ

Okanogan native Jill Townsend says she came to San Antonio to win, not for the mementos, but that the NCAA's handling of a few things in the women's bubble compared to the men's has troubled her.

"What does kind of raise some eyebrows and get some attention with me is just from the health and mental health stand point of the disparities between the men and women. You saw the weight room, obviously, and the weight room serves as a health standpoint for us. It's injury prevention. Then I know the men's side is getting this outdoor field where they're able to go and play games and do different stuff, like football and soccer. Our only outdoor time that we get is our walk to get tested. I think from our mental health stand point and outside and a health standpoint between the weight rooms and food, there kind of is no reason for that disparity between the men's and women's side. We deserve our health and mental health to be taken as seriously as the men," said Townsend.

"We deserve our health and mental health to be taken as seriously as the men." pic.twitter.com/q0fJnT7Gbr

Speaking of the men, several players on the Gonzaga men's team have shared on their Instagram story the differences between the men's and women's bubbles.

Several celebrities, like Steph Curry and Sabrina Ionescu, have also spoken up.

"It's huge. It's super important that both men and women are kind of drawing attention to it because I think if it's only coming from the women's side, the people who don't have respect for women's sports aren't going to care," said Wirth.

"It's been amazing. I'm glad everyone is speaking up and talking and not scared of anything. I think a lot of people need to talk about it so the NCAA can hear us and change it," said WSU forward Bella Murikatete.

Some companies have also put their money where their mouth is. Dick's Sports says they have U-Hauls with workout equipment ready to go and Orangetheory offered up their water rowers for the bubble.

Jill Townsend says it's bittersweet that these companies have to step in to try to shore up the NCAA's inequities, but that she's grateful they care.

"It is super cool to see these companies and people and these pros, both men and women, calling out and taking up the call that it wasn't right and that it needs to be fixed immediately. To see these companies step up and put themselves on the line for us women to get as equal as treatment as the men's side, it is really cool to see how that call has taken up across the nation," said Townsend.

Murekatete summed the issues in the bubble up in one ten second soundbite.