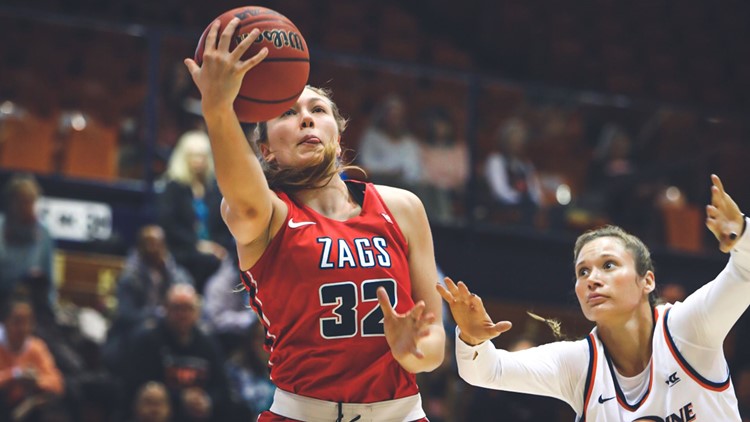 The Gonzaga women's basketball team lost a lot of talent from last year, but proved they could reload finishing with a record of 28-3 overall.

They reached their highest associated press poll ranking ever this season. Gonzaga also held the nation's longest winning streak at a time. The Zags did it with their defense and balanced scoring.

Here are the team's top five moments of the season.

Gonzaga throttled Saint Mary's in a home game this season.

The Zags had balanced scoring as four played had double digit point performances. The defense was just as strong, Gonzaga held Saint Mary's to just 25 percent shooting for the game.

It was the team's most complete performance of the season.

Guard Jessie Loera got quite the surprise from her sister on senior night.

She was about to play her last game at home as a Zag and then her sister Jamie brought her sister tears of happiness by her surprise appearance. Jamie is a guard at Arizona State and came from Tempe, Arizona to surprise Jessie.

Both grew up in Moses Lake and played at Moses Lake High School, so it has a neat local tie to it too.

NUMBER 3: THE COMEBACK AGAINST PORTLAND

The Zags fell down by 20 points in a home game against Portland.

Portland came out on fire. Jill Townsend went bonkers in the third quarter to lead the Zags back.

She hit three three-pointers to spark the team, Gonzaga trailed by six going into the fourth quarter.

The Zags used one more push in the fourth quarter to get the win. The Zags allowed Portland just four points in the final quarter on 17 percent shooting.

Many thought Stanford was going to blow the Zags out of the water in this one. Nobody knew what the Zags were going to look like against a top-tier opponent after losing so many key players.

But the Zags took Stanford to overtime in a back and forth game. Townsend led the way with 18 points.

The Zags ended up losing 76-70, but it was proof Gonzaga could hang with top teams in the country yet again.

Jill Townsend was named West Coast Conference Player of the Year this season.

She did this after suffering a season ending injury last season, tearing ligaments in her foot in the conference tournament.

She was named conference player of the week twice this season. she averaged about 12 points and six assists.