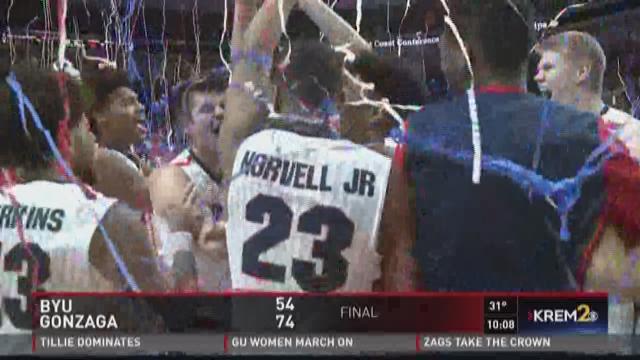 LAS VEGAS (AP) - Killian Tillie scored 22 points and No. 6 Gonzaga raced away to its sixth straight West Coast Conference title with a 74-54 victory over BYU on Tuesday night.

Gonzaga (30-4) appeared as if it would lock into a defensive battle with BYU (24-10). The Zags turned it into a title-game rout with a halftime-spanning 36-6 run to win their 17th WCC title.

The dominant title performance should boost Gonzaga's chances for a high NCAA Tournament seed in what could be its last go-round in the WCC. The Bulldogs are in talks about joining the Mountain West Conference, possibly next season.

Yoeli Childs had 20 points to cap a stellar tournament for BYU.

Heading into the tournament, Gonzaga appeared to be on course for another showdown with No. 22 Saint Mary's in the WCC title game.

The Zags, the tournament's top seed, did their part, beating Loyola Marymount and San Francisco to reach the title game for the 21st straight season.

BYU got in the way of the No. 2-seeded Gaels. The Cougars shot 61 percent and Childs had a career-high 33 points, lifting them to an 85-72 victory and into the title game for the first time since 2015.

Gonzaga won both meetings during the regular season, by eight in Spokane and 14 in Provo.

BYU was able to match Gonzaga shot for shot for most of a first half dominated by defense. The Zags found a little more room to operate offensively late in the half, closing on an 11-2 run to go up 38-29.

Gonzaga continued its surge to open the second half, holding BYU without a field goal the opening 5 minutes while going on another 11-1 run. The Zags kept pouring it on, pushing the lead to 57-31.

Gonzaga's home loss to Saint Mary's turned out to be the incubator to a massive turnaround. Bulldogs are dominant. Final Four contender again.

BYU seemed worn out in its third game in four days, unable to keep up with the flying Bulldogs.

If this is Gonzaga's final WCC tournament appearance, it went out with a flourish.

BYU could end up in one of the smaller postseason tournaments.

Gonzaga could be up for a top-2 seed when the NCAA Tournament field is revealed Sunday.