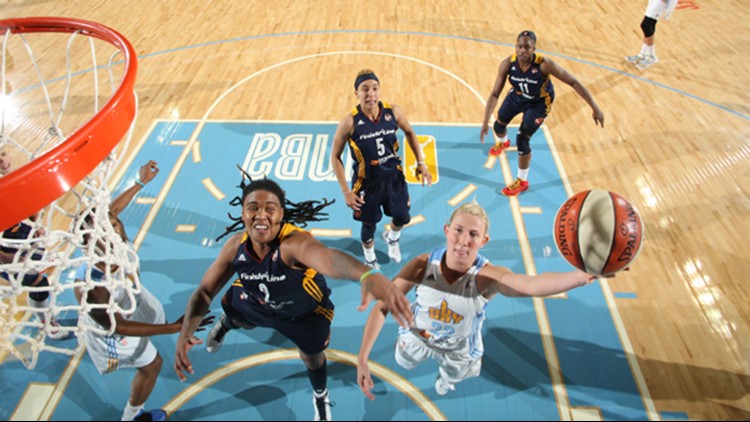 Photo by: KREM
ROSEMONT, IL - SEPTEMBER 20: Courtney Vandersloot #22 of the Chicago Sky goes to the basket past Karima Christmas #11 of the Indaina Fever during Game One of the Eastern Conference Semi-Finals on September 20, 2013 at the Allstate Arena in Rosemont, Illinois. NOTE TO USER: User expressly acknowledges and agrees that, by downloading and/or using this photograph, user is consenting to the terms and conditions of the Getty Images License Agreement. Mandatory Copyright Notice: Copyright 2013 NBAE (Photo by Gary Dineen/NBAE via Getty Images)

SPOKANE, Wash. — Former Gonzaga Bulldogs star Courtney Vandersloot was named as one of 22 WNBA All-Stars on Monday, according to a Gonzaga University press release.

This marks Vandersloot's second All-Star appearance, according to the release. Vandersloot, who plays for the Chicago Sky, was chosen along with two other teammates and 22 players total.

Vandersloot previously made the All-Star Game in her rookie season in 2011, according to Gonzaga. He is currently averaging 9.7 points per game and 8.2 assists per game, and recently moved into the No. 7 spot on the WNBA all-time assists list, according to the release.

She became the first Gonzaga Bulldogs women's basketball player to be selected in the first round of the WNBA Draft in 2011 when she was taken by the Sky with the third-overall pick, according to the release.

While at Gonzaga, Vandersloot was a three-time West Coast Conference Player of the Year, was named to the Associated Press All-America second-team and was honored with the Nancy Liberman Award for the nation's top point guard, according to the release.

Editor's Note: The below video is a report on former Gonzaga Bulldogs guard Nigel William-Goss potentially signing with the Utah Jazz.