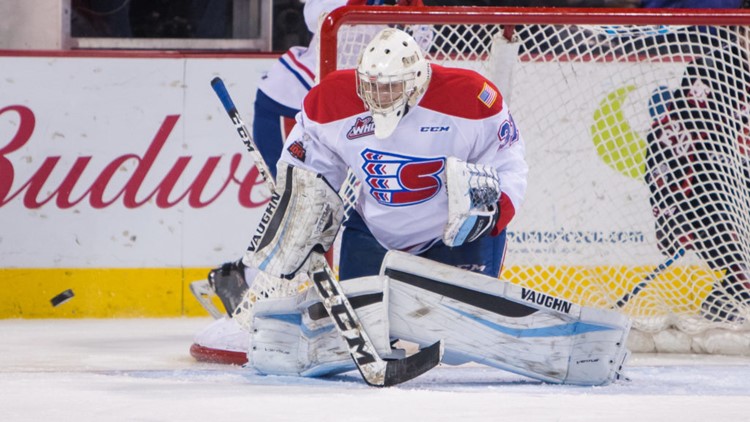 SPOKANE, Wash. — The Chiefs entered the last month of the regular season hoping to find the consistency in their performance that had been lacking all year. The last full week of February saw the club get a chance to work out the kinks in their game as they had the week off until hosting Kelowna and Tri City at home on Friday and Saturday at the Spokane Arena. With a 4 games in 5 nights road trip looming next week, the Chiefs were hoping to build a little momentum going into March and at the same time, snap a 2 game losing streak. Spokane needed the wins as well because during the week, Tri City had passed Spokane for third place in the standings by a point. With a huge game with the Americans coming up Saturday, the Chiefs started the week by hosting Kelowna on Friday. Spokane had won the previous two meetings with the Rockets, but had to battle to a 5-4 victory in Kelowna in the two teams last match-up.

Spokane came out looking like they would make it 3 straight over the Rockets as the Chiefs controlled the puck in the Kelowna end over the first 5 minutes. A mistake in defensive coverage led to a Rockets 2 on 1 break, and Leif Mattson finished it off as goalie Bailey Brkin couldn't keep the puck from crossing the goal line and Kelowna scored on their first shot of the game over 5 minutes into the game to take a 1-0 lead. The Chiefs answered right back, as they would score on a 5 on 3 power play just over two minutes later on Riley Woods team leading 28th of the season to make it a 1-1 game after one. Spokane put up 20 shots in the first as the ice was definitely tilted in the Chiefs favor. The second period would see Spokane take all 4 penalties in the period and the Rockets go 2 for 4 on the power play to go ahead 3-1 after two.

RELATED: CHIEFS BLOG: Spokane narrowly ahead of Americans for third in US division

The third period would see Spokane bring offensive pressure on the Kelowna defense, but the efforts saw no change on the scoreboard over the first half of the stanza. The Chiefs would get a power play midway through the period and would capitalize as Luke Toporowski would tip in a Nolan Reid shot at 14:36 to cut the Rockets lead to 3-2. Spokane would then pull Brkin in the final minute and a half and the move paid off as Luc Smith finished off a Riley Woods shot with just 27 seconds remaining in regulation to even the score at 3-3 and send the game to overtime. Despite getting a couple of great chances in OT, the Chiefs were unable to score as the two teams headed to a shootout. Spokane was just 1-4 in shootouts coming in and it took just 2 rounds to see that mark go to 1-5 as the Rockets won the shootout 2-0 to hold off the Chiefs comeback efforts in a 4-3 win.

The Chiefs losing streak had now hit 3 games in a row, and the club fell two points back of Tri City for third in the U.S. Division as Spokane prepared to host the Americans to close out their week on Saturday. The Ams were coming off a 4-2 win over second place Portland the night before and had won 8 of their last 10 to move past the Chiefs in the standings. As Spokane was looking at a 4 games in 5 nights road trip next week, the game was a must win in regulation for the Chiefs if they hoped to keep their hopes of taking third in the division alive. Saturday's game came in front of the largest crowd to attend a home game at the Arena this season, as 9,808 made their way in hoping to see Spokane snap that 3 game skein.

Both teams were held off the score board in the first as the two teams goaltenders, Reece Klassen for the Chiefs, and Beck Warm for the Americans, were sharp from the puck drop. Tri City started the second with nearly 3 minutes of power play after the Chiefs took a 4 minute double minor penalty for high sticking towards the end of the first. Spokane's penalty kill had been struggling coming in, but would go a perfect 3 for 3 to keep Tri City off the board. After the Chiefs killed off the Ams final power play opportunity, Adam Beckman would give the Chiefs a 1-0 lead with a power play goal midway through the second. Tri City would counter though with a Nolan Yaremko goal late in the period to send the game to the third tied 1-1.

Spokane's Eli Zummack, who saw his 12 game assist scoring streak, the second longest in the league this season snapped on this night, would get the Chiefs the lead again as he scored his 14th of the year 3:32 into the third to make it 2-1 Spokane. The Americans would out shoot the Chiefs 13-6 in the third, but Klassen was perfect in the period as he stopped a Riley Sawchuk point blank chance with about 30 seconds left to preserve a huge 2-1 victory. The win was just the 3rd in 9 tries for Spokane against their arch rivals this season, and the team is now even in the standings with Tri City for 3rd in the U.S. with a game in hand on the Americans.

The team now has just 3 weeks left in the regular season, and 11 games total to play. Four of those will come on the road this week as Spokane will play at Prince George, Portland and Tri City with 4 games in 5 nights. The trip will mean the club is on the road traveling about 10 times more than they are actually on the ice playing a game. Every game from here on out is critical and the Chiefs must improve the way they've played on the road. Spokane is just 10-13-2-2 away from the Spokane Arena, and realistically will need to win 3 of 4 this week minimum to keep pace with Tri City in the division. All 4 games this week will see the puck drop at 7:05 pm. I'll have the call on 103.5 the Game and 1510 KGA on Tuesday and Wednesday from Prince George and Friday from Portland. Saturday's game from Tri City will be on 94.1 the Bear due to Gonzaga basketball. Pre-game shows start at 6:30 pm this week, and let's hope the Chiefs play like they did Saturday. We'll see you on the radio!

RELATED: Chiefs Blog: A look back at the Chiefs' 3 game week with Portland and Kelowna