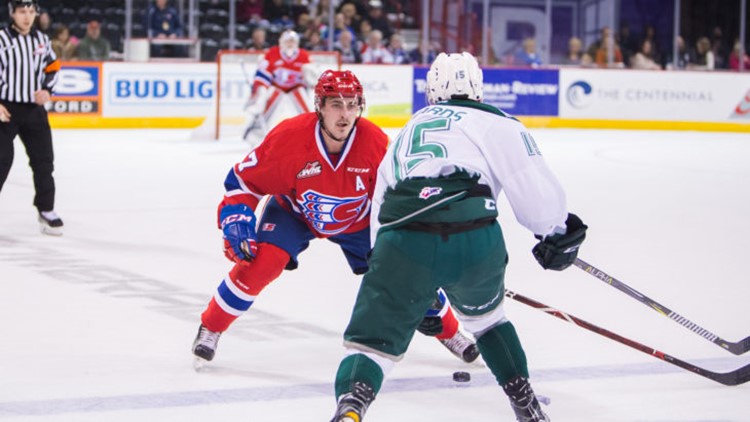 With back to back losses on the first two games of their 3 game road trip, the Chiefs looked to salvage the final game of the road swing as they opened a 4 games in 5 nights stretch Wednesday in Everett. The road trip had started with a 5-4 overtime loss to the Silvertips the previous Friday, in a game that Spokane coughed up a 3-1 third period lead. Things had gone down hill from that moment, as the Chiefs were outscored 12-3 by the Silvertips and Portland in losing ground to Everett in the U.S. Division race. Spokane was now 13 points back of the first place Tips heading into Wednesday's game, leaving the team in an almost must win to get within eye sight of the division lead.

Spokane welcomed a new member to the team, as the club dealt forward Carter Chorney to Swift Current for defenseman Noah King. With the club losing d-men Ty Smith and Filip Kral to the World Junior tournament this upcoming Monday, the Chiefs needed some veteran leadership on the back end to go with Nolan Reid. King's debut would be a solid one as he played well in his debut against Everett Wednesday. Spokane fell behind 1-0 after one though as Everett scored on their second power play of the game late in the first period. The Silvertips then scored on a breakaway and another power play in the second period to go up 3-0 after two.

The Chiefs started their comeback with an Ethan McIndoe power play goal 48 seconds into the third to make it 3-1. Riley Woods team leading 21st of the year on the power play midway through the third cut the margin to 3-2 and got Spokane back into the game. The Chiefs didn't get any closer though, as an empty net goal from Everett sealed a 4-2 victory, extending the Chiefs losing streak to 3 straight and leaving Spokane 15 points back of the Silvertips in the U.S. Division. More importantly, the Chiefs were just 2 points ahead of Tri City for third in the division as Spokane headed home for a two game home stand beginning Friday against Lethbridge. The Hurricanes were coming off an overtime win over Kootenay on Wednesday and had moved within a point of Red Deer for the top spot in the Central Division. Friday's game would also begin a three games in three nights stretch for Spokane as they hoped to close the gap on Everett in the U.S. Division.

Friday's game with the Hurricanes would begin a lot differently than the previous two road games, as Spokane jumped on top 1-0 on a Luc Smith power play goal just 4:34 into the game. A mere 15 seconds later, Jake McGrew scored his second goal in three games on a rebound net front to give Spokane a 2-0 advantage after one. Smith would score his second power play tally of the night off a one timer 1:16 into the second stanza to give the Chiefs a 3-0 edge. Riley Woods team leading 22nd of the season at 4:05 would extend the lead to 4-0 as it looked like Spokane would run away in a blowout. Lethbridge had other ideas though, as back to back goals in the second half of the period would cut the lead in half at 4-2 after 40 minutes. Spokane re-established control of the game in the third though, as Woods scored his second of the night, and the Chiefs third power play marker of the game midway through the third to give Spokane a 5-2 lead. Cordel Larson capped a great game with a wrap around goal late in the contest to seal a 6-2 victory and put an end to Spokane's 3 game losing streak. The Chiefs league leading power play had another great night, going an impressive 3 for 4 as they improved to 4-1-0-1 against the Central Division this season.

Spokane welcomed another Central Division squad, Kootenay, to the Spokane Arena the next night for the team's annual Teddy Bear Toss Night. The largest crowd of the season, 9,807 were on hand to throw some bears to the ice, but the Chiefs made them wait a while. Kootenay jumped out to a 1-0 lead midway through the first and held that lead after 20 minutes. Spokane broke through and over 7,800 bears fell to the ice when Bobby Russell scored his third of the year just 2:10 into the second period to tie the game at one. Kootenay answered with a power play goal from Jaegar White midway through the period to take a 2-1 lead after two. Spokane had been an abysmal 1-8 when trailing after two this season but would look to change that in the third period.

The Chiefs scored on their first shift of the third as Luke Toporowski made a great pass to an open Luc Smith cutting to the net on the weak side. Smith's third goal in two nights tied the game at 2 and had the building energized once again. Cordel Larson got the crowd roaring with his second goal in as many nights on an unassisted tally at 3:13 to give Spokane their first lead of the game at 3-2. The lead held until just 8 seconds remained as Kootenay pulled their goalie and scored after goalie Dawson Weatherill lost the puck in the crease and the teams headed into overtime tied at 3. In the OT, Weatherill stopped a breakaway from White and then flashed the leather with back to back saves in a frenzied sequence to keep the game alive for Spokane. A Kootenay turnover led to an Eli Zummack breakaway and he left the Kootenay netminder sprawled on the ice with a slick back hand to forehand move at 2:35 of OT to give Spokane a much needed 4-3 victory.

The win enabled the Chiefs to keep pace with both Everett and Portland in front of them in the division standings as Spokane headed West to wrap up their 3 games in 3 nights stint at first place Everett on Sunday. Spokane had just lost there on Wednesday after falling behind 3-0 early and were determined to not make the same mistake in the Chiefs final visit to the Silvertips rink this season. Everett was coming off a hard fought 2-1 win at Seattle the night before and had won 8 straight coming into the Sunday afternoon tilt. The Chiefs went back to Bailey Brkin in net after he had played well the last time in Everett 5 days earlier.

It was a good call, as Brkin turned aside all 13 shots he saw in the first period as the game was scoreless after one. Spokane generated the only power play of the period, but failed to score, as the man advantage opportunity was the only one in the game for the Chiefs. The second period saw Brkin and the penalty kill turn aside two Everett power plays and the Chiefs goalie stopped all 16 shots he faced in the middle 20 minutes to keep the game scoreless after two. The two clubs slugged it out in the third as the game remained 0-0 through the first 15 minutes of the period, but Everett broke through on a Bryce Kindopp tip with less than 5 minutes left to take a 1-0 lead. The Silvertips scored an empty netter from Kindopp with 11 seconds remaining to wrap up a 2-0 victory and hand Spokane their 4th loss in 5 contests with Everett.

The loss sent the Chiefs 15 points back of Everett in the division as Spokane heads into the final week of the first half of the season. Spokane will also lose defensemen Ty Smith and Filip Kral to the World Junior Tournament for the next 3-4 weeks, so the club will be a little short handed defensively heading into the break. Spokane has 3 games left before a 10 day hiatus over Christmas. The Chiefs return home to host Everett again on Wednesday before they head to Seattle Friday for the start of a home and home series with the Thunderbirds. The Chiefs will wrap up the first half by hosting Seattle Sunday the 16th. I'll have the call on 1510 KGA Wednesday with the pre-game show at 6:30 pm and the puck drop at 7:05 pm. Friday's game from Seattle will be a 7 pm pre-game and a 7:35 pm start, while Sunday's game is a 4:30 pm pre-game and 5:05 pm start. Let's hope the boys finish the first half strong and we hope to see you at the rink!