For the first time since the 2010-11 season, the Chiefs found themselves in the Western Conference Finals after upsetting the U.S. Division and defending conference champion Everett Silvertips in the semi-finals. Read the full blog here. 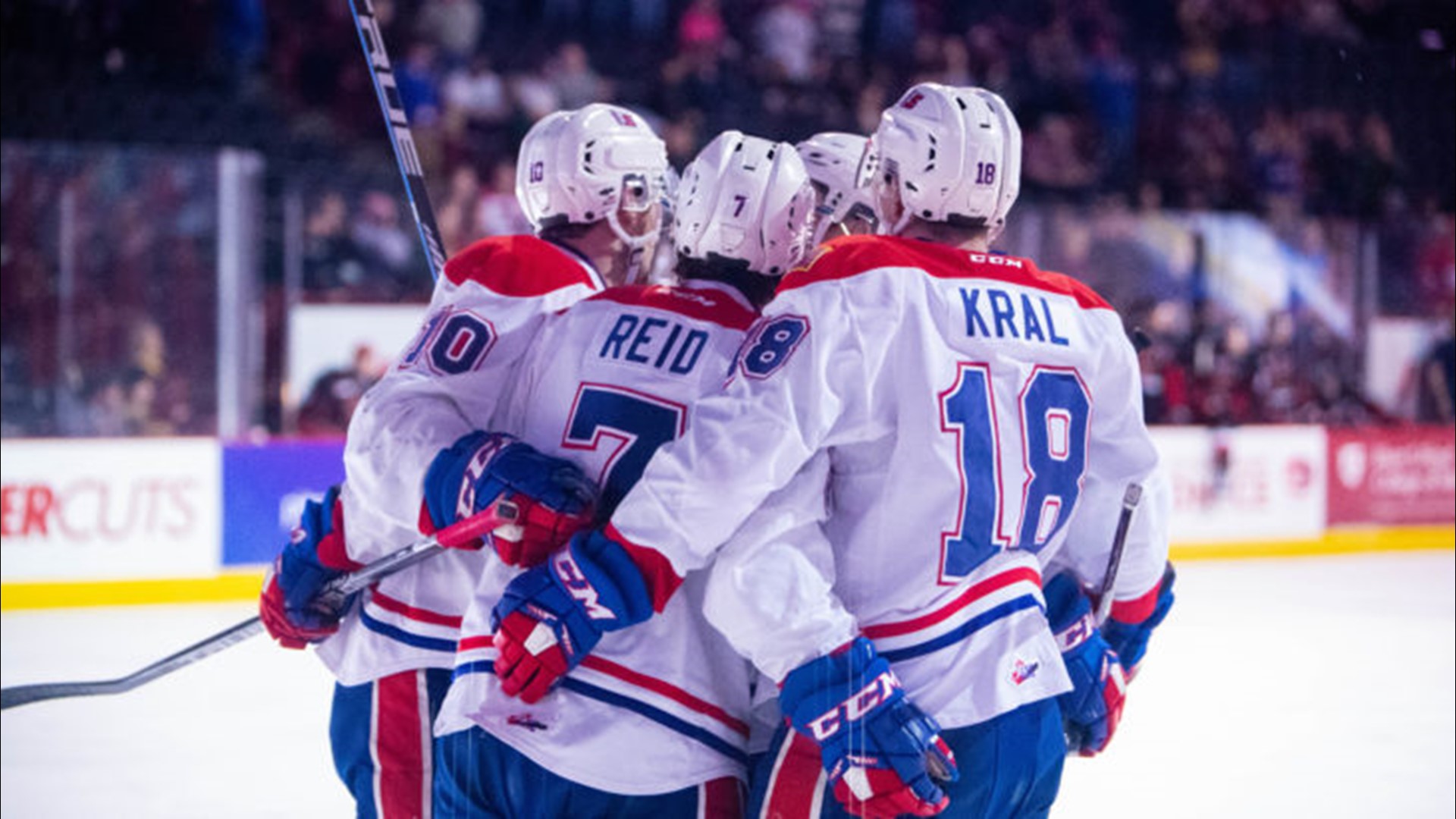 SPOKANE, Wash. — For the first time since the 2010-11 season, the Chiefs found themselves in the Western Conference Finals after upsetting the U.S. Division and defending conference champion Everett Silvertips in the semi-finals. Spokane had dispatched the Tips in just 5 games after having eliminated Portland in five in the first round. The Chiefs had won 24 of their last 29 games and were definitely playing their best hockey of the season as they prepared to face the B.C. Division champion Vancouver Giants. Vancouver was in the West finals for the first time since 2010, so the match up was between two franchises that had been not enjoying a lot of playoff success of late. Spokane had lost three of four to the Giants during the regular season, but had beaten Vancouver in the two teams last meeting in Spokane on March 8th 4-1.

Friday's game one would feature two clubs that had gone 8-2 through their first two rounds. The Giants had been off since the previous Thursday after wrapping up their series against the Victoria Royals. Vancouver was definitely the sharper club in the first period as they converted a power play, the only one of the frame, 6:25 into the game to take a 1-0 lead. Spokane then bungled a puck in their own zone by the left post that led to an easy rebound goal 2:12 later and the Giants had a 2-0 lead after one. Things didn't improve in the second as Vancouver scored off a rush only 57 seconds in to take a commanding 3-0 advantage. Spokane finally got on the board when Adam Beckman scored his team leading 6th of the playoffs at 5:30 to cut the margin to 3-1. The Chiefs had a golden chance to cut the lead to one 8 minutes into the third, but Jake McGrew was unable to get a stick on a loose puck outside the Giants goal line, and the Chiefs would muster nothing close after that. Vancouver would close out the game with an empty net goal in the final two minutes to take game one 4-1, and leave the Chiefs in a series deficit for the first time in the post season.

Spokane played perhaps their worst game offensively in the playoffs as they got out played by the Giants in practically every aspect of the game. The Chiefs did manage to win the shot battle 31-30, but the chances that were capitalized on definitely went Vancouver's way. It was the first game of the playoffs Spokane failed to score on the power play as the Chiefs managed just 2 man advantage opportunities, and it was the first time Spokane had lost on the road in 5 tries. Now the Chiefs faced a major challenge in game two as they tried to even the series without forward Luc Smith. Smith suffered a leg injury in the opening minutes of game one and did not return. He would spend game two in a leg brace and it appears he may not be available for the rest of the series. His absence up front is huge for Spokane and the team had to find a way to compensate for his loss on the top power play unit and his face off ability.

Game two would see the Chiefs hold the Giants off the scoreboard in the first period, an improvement over the night before. Even more importantly, Spokane would get the early lead as Noah King's shot from the left point found the net with just over 18 seconds left in the period to give the Chiefs a 1-0 advantage after 20 minutes. The Chiefs came right out in the second period and scored on the first shift as Jaret Anderson-Dolan scored on a rebound of a Jake McGrew shot only 19 seconds in to give Spokane a 2-0 lead. Spokane held that lead through the second as the team found themselves 20 minutes from evening the series. Then came the third period.

The game would turn on an odd bounce that came off an entry pass into the Chiefs zone just over 5 minutes into the period. The puck bounced on an angle straight across the ice and into the left circle, where the Giants Dawson Holt fired home a goal to bring Vancouver within 2-1. The goal got the building jumping and more importantly, got the Giants going. What followed was an onslaught from Vancouver as the Chiefs got overwhelmed and buried in a flurry of goals. Jared Dmytriw scored two goals in just 22 seconds to tie and give the Giants their first lead at 3-2. Vancouver added a power play 1:03 later and the Giants had put up 4 goals in just 3:21 to take a 4-2 lead. I've never seen a playoff game swing so fast and suddenly, and the Chiefs looked helpless to stop it. Vancouver put up 20 shots in the third period as Spokane went from tying up the series to being down 2-0.

Now the great challenge for the club is to hold home ice in games 3 and 4 and make the series a best of 3 heading back to Vancouver. It's going to be a major task mentally for the Chiefs to bounce back from the meltdown in the third period in game two. Spokane had control of the game and found out the hard way that 55 minutes is not enough to win a 60 minute contest. Vancouver no doubt has upper hand in this series, and they know just one win in Spokane gives them a chance to wrap up the series on home ice in game 5. The pressure is squarely on Spokane to win game 3 and there's no question the club will need the same desperation they showed in the previous two playoff series to have a chance to extending this match-up with the Giants. Games 3 and 4 will be at the Spokane Arena Tuesday and Wednesday nights at 7:05 pm with game 5 set for Vancouver on Friday at 7:35 pm. I'll have the call on 103.5 FM the Game and 1510 AM KGA starting with the pre-game shows at 6:30 pm on Tuesday and Wednesday and 7 pm on Friday. Let's hope the Chiefs find their game on home ice and we hope to see you at the rink!