Spokane Hoopfest Executive Director Matt Santangelo said he has been working with the City of Spokane and the local health district on protocols for the tournament. 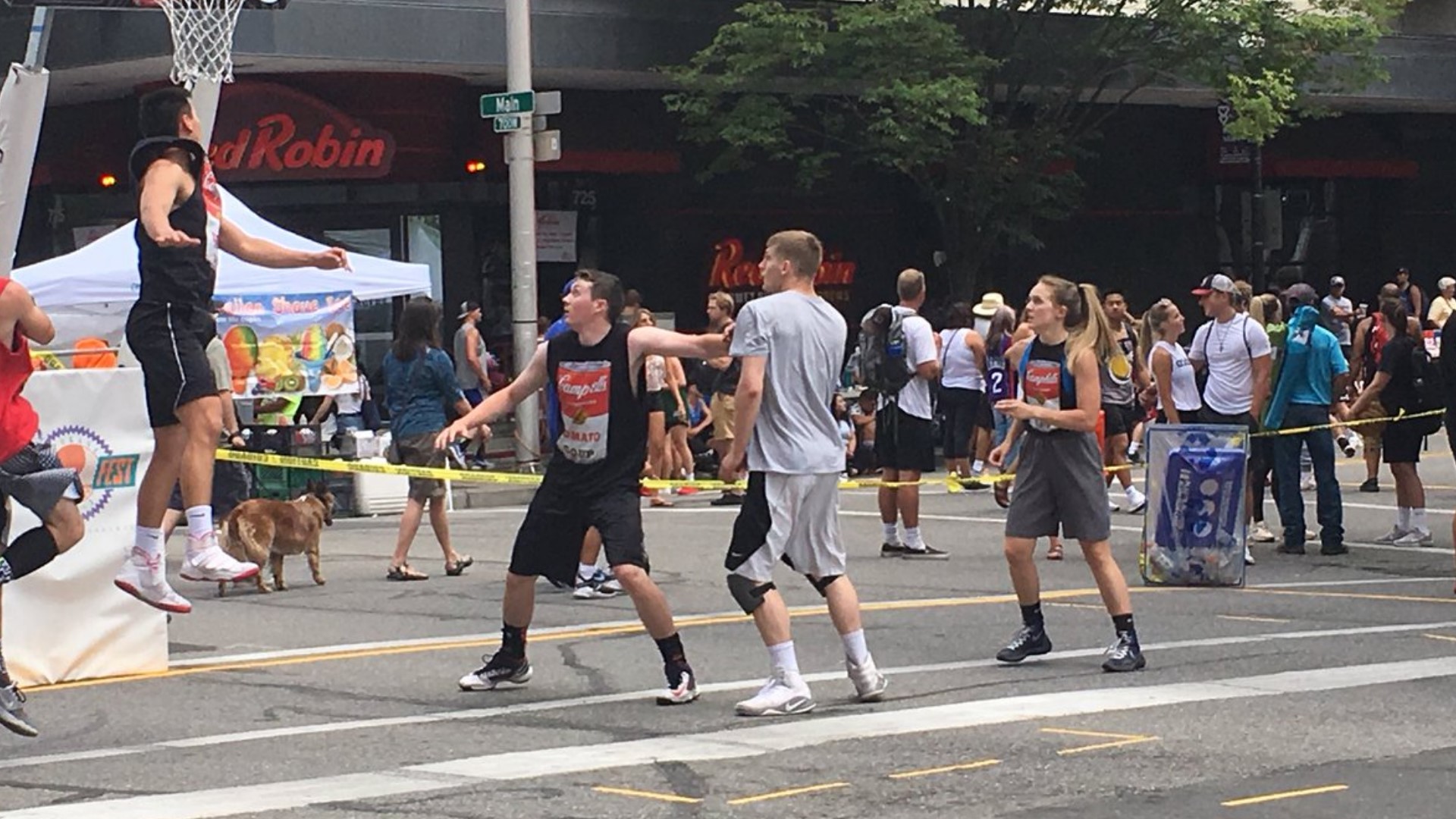 SPOKANE, Wash. — Spokane Hoopfest announced on Thursday that its still planning to hold the world's largest 3-on-3 basketball in August amid the coronavirus pandemic.

In a Facebook Live by Hoopfest Executive Director Matt Santangelo on Thursday, registration has opened and the tournament is planned to happen on August 22-23.

"We are excited. We are working, almost every other day, with the City of Spokane, our regional health district, and we’re excited to say that we are still planning on going full steam into August for Hoopfest this year," he said.

However, the tournament will look different from previous years. Santangelo said the tournament will likely allow less teams to play, suggesting the limit could be set at 50 percent capacity for teams and fans as compared to previous years. He also said courts will be more spread out to increase social distancing, and adult and youth courts will be kept as far away from each other as possible.

He also said sanitation will be increased and they will try to keep track of where teams are from.

At the beginning of April, Hoopfest said they would make the decision at the end of the month on whether or not to move the event from June to August. Obviously, the organization decided to move up their timeline a bit.

"The idea was that the sooner we can make the announcement, the better people can plan," said Hoopfest Executive Director Matt Santangelo. "We said, 'Okay, even if social distancing guidelines are lifted, you and I may not be confident to go out in large groups at the end of June.' It was like, 'What we are holding on for?' If we’re starting to lose confidence that June, even if it’s safe, that doesn’t instill the confidence that we’d like. We'd like to have Hoopfest executed at the highest level."

Santangelo said when the idea was originally floated at the beginning of the month to move Hoopfest, they sent out a survey to participants asking if they would compete in August.

"Eighty-three percent of the respondents so far said, 'Yep, we’re in.' People are obviously enthusiasts and loyalists to Hoopfest, so they just want to see it happen," said Santangelo. "I think for us collectively, even though August is far away but not too far away, it’s still just nice to have something to look forward to and people look forward to Hoopfest. So the fact that we still have a sporting event to look forward to, I think also was received very, very well and positively by everyone."

RELATED: 'Hoopfest 2020 is going to happen one way or another,' director says

If Hoopfest is able to be held this summer, it would certainly be a big deal for our region-- both from a community and economic standpoint.

And if Hoopfest still isn’t safe to be held in August?

"For us as an organization, it’s being as nimble and flexible as we can. Ultimately, August may not be our choice. That’s what we have to do. There’s no reason in arguing that or trying to take a different stance. If it’s safe to have Hoopfest, we’ll have Hoopfest. If it’s not safe, we’ll go to plan C."

Plan C, by the way, does not stand for cancel. Matt remained steadfast that Hoopfest will happen in some way, shape, or form this year. Although when asked, he didn't have any concrete details on what Plan C would look like right now.