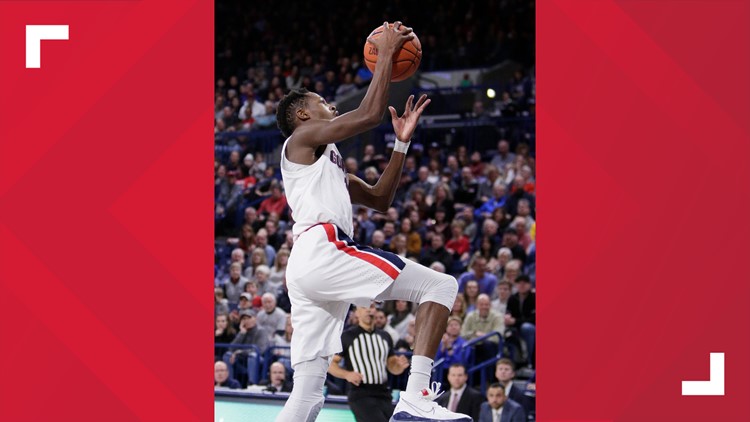 Photo by: AP
Gonzaga guard Joel Ayayi goes up for a layup during the first half of the team's NCAA college basketball game against Santa Clara in Spokane, Wash., Thursday, Jan. 16, 2020. (AP Photo/Young Kwak)

’’We don’t take anything for granted. We get everybody’s best effort,″ Few added. “It means you are not slipping up mentally or physically.″

Gonzaga won its 33rd straight home game, the longest streak in the nation.

Gonzaga shares the conference record set by Pepperdine from 1991-93, and has a chance to break it Saturday against BYU.

Corey Kispert added 16 points for Gonzaga (19-1, 5-0 West Coast), which opened a stretch in which it plays three games against opponents just behind it in the league standings.

Josip Vrankic scored 12 points and Trey Wertz 11 for cold-shooting Santa Clara (15-4, 2-2), which is off to its best start in decades. But the Broncos have lost 20 straight to Gonzaga, dating to 2011.

The Broncos were doomed by 30% shooting in this game, including 3 of 25 from 3-point range.

Gonzaga has won 11 games in a row since its only loss to Michigan.

The Bulldogs then went on a 20-5 run to push their lead to 40-14 midway through the first.

’’We jumped out and played with great tenacity,″ Few said. ’’We protected the rim.″

Gonzaga shot 51% in the first and sank seven 3-pointers.

Santa Clara opened the second half with a 14-4 run, eight points by Vrankic, to cut Gonzaga’s lead to 62-36. But it was too little, too late.

Santa Clara coach Herb Sendek was not available for comment immediately after the game.

Santa Clara’s tough shooting night extended to free throws, where they made just 9 of 19. Gonzaga sank 28-of-32 free throws. The Zags won the rebound battle 53-35.

An easy win over a quality league opponent should help the Zags stay atop the AP Top 25 for another week.

Gonzaga freshman forward Anton Watson will have shoulder surgery and miss the rest of the season, the team said. He appeared in 15 games. ’’He’s a warrior. He has a bright future,″ Few said.

Santa Clara: The Broncos have seven players averaging at least 7 points , but as a team average just 66.8 per game, 20 points fewer than Gonzaga. ... This is Santa Clara’s best start since the 1977-78 season ... Forward Guglielmo Caruso is out indefinitely with a leg injury.

Gonzaga: The Zags lead the nation in scoring at 87.8 points per game, and are the only team with six players averaging in double figures. Petrusev leads with 16.6 ppg.

Gonzaga hosts BYU, which has had some success in Spokane, on Saturday. “It’s hard to find a program that plays as consistently hard as they do,″ Few said. ’’They are an old team and a skilled team.″

RELATED: Gonzaga students make giant No. 1 out of cupcakes to celebrate basketball team