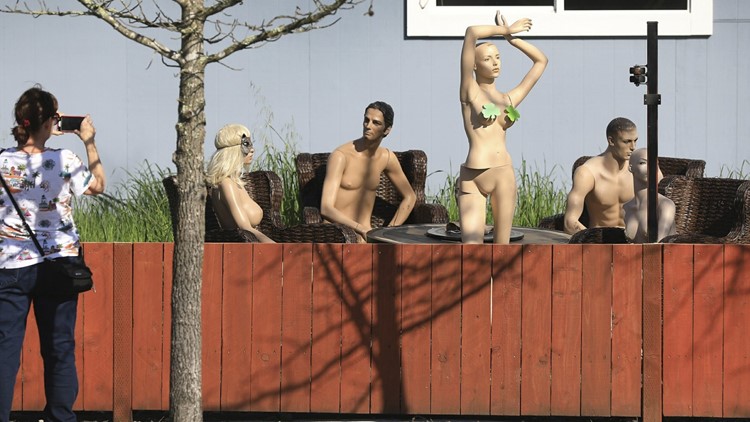 Photo by: (Kent Porter/The Press Democrat via AP)
In this photo taken Monday, March 18, 2019, a woman stops to photograph a display of mannequins in Santa Rosa, Calif. Homeowner Jason Winduce set up the display, after a neighbor in the area complained to the city about his six-foot-tall fence. Winduce had to cut the fence to three feet. (Kent Porter/The Press Democrat via AP)

SANTA ROSA, Calif. — Jason Windus gave his California neighbor something to look at during a dispute over the height of a backyard fence — naked mannequins having a garden party.

Four of the fashion dummies are seated in wicker chairs around a matching table. Another is standing with its arms over its head and shamrocks over on its breasts.

A hand-scrawled sign on top of a nearby wooden barrel reads, “Reserved seat for the nosey neighbor that complained about my fence to the city.”

In this Monday, March 18, 2019 photo, homeowner Jason Winduce attempts to keep a sign he wrote from tipping over in the wind after he set up a display of nude mannequins in his Santa Rosa, Calif., yard. (Kent Porter/The Press Democrat via AP)
AP

“They wanted me to tear down my fence to see inside my yard, and now they get to,” Windus said.

Windus said he was building a 6-foot (2-meter) fence at his home in Santa Rosa so he could let his dogs out in his backyard when he got a letter from the city saying it violated an ordinance limiting such barriers along sidewalks to 3 feet (1 meter).

“It was a 6-foot fence, like everybody else’s around here,” Windus said Tuesday.

Windus asked why he was being singled out and was told City Hall was responding to a complaint.

Windus, who owns a moving company, said the mannequins he had picked up from a clothing store came to mind as he pondered how to send a message to the neighbor.

Other stories people are checking out:

'I Don't Know Why People Don't Like It': Man Says Neighbors Don't Like His House's Paint Job