Karaoke falls under the Theatre and Performing Arts section of Washington's reopening plan. 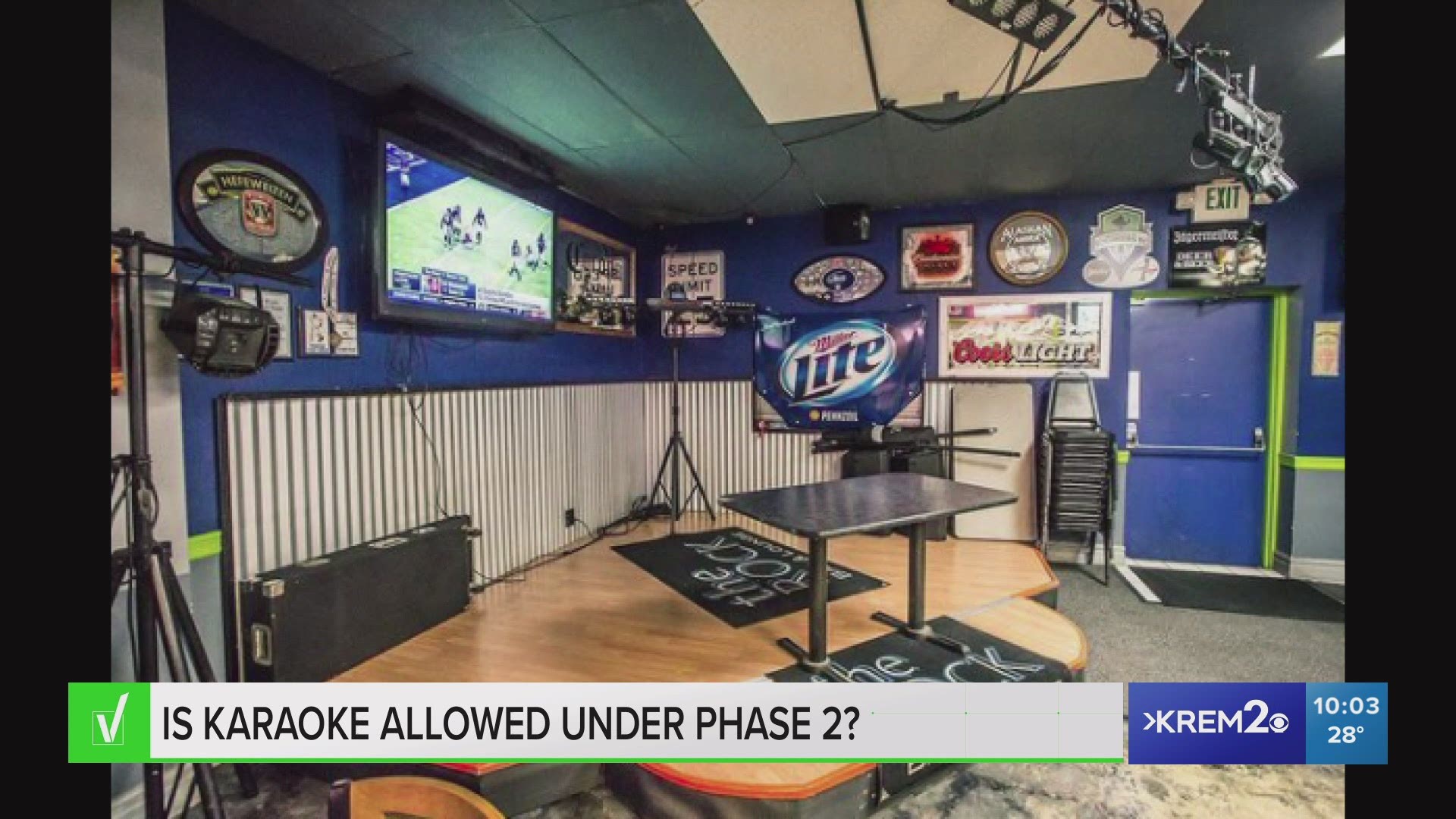 SPOKANE COUNTY, Wash. — Bars and restaurants in the Spokane-area are gearing up for their first full weekend of being able to bring customers back inside their establishments.

Under Phase 2 of Washington’s 'Healthy Washington: Roadmap to Recovery Plan', businesses can resume indoor dining at 25 percent capacity. Several viewers have reached out to the KREM 2 Verify Team to ask if karaoke is allowed during Phase 2.

Viewer Daryl wrote in an email, “I have been trying to contact the governor and Department of Labor and Industries regarding clarification of “live entertainment” in Phase 2. Does this include karaoke?”

To verify the answer to this question, the KREM 2 Verify Team reached to the Spokane Regional Health District, the Washington State Department of Health and we consulted the guidelines established in the Healthy Washington: Roadmap to Recovery Plan.

Is karaoke included in Phase 2 in Washington?

Spokane Regional Health Spokesperson Kelli Hawkins wrote in an email to KREM 2, “There is a safe way to offer karaoke again!"

“In the Governor’s Restaurant, Tavern, Breweries, Wineries and Distilleries COVID-19 Requirements it refers to the Theatre and Performing Arts requirements for live entertainment allowed. There is a section in the document that lists “Choral/Vocal/Opera/Musical Theatre/ Comedy/Spoken Word/Poetry Readings or Slams” – karaoke would fit into this section," she said in her email.

The guidelines stipulate that establishments that offer karaoke must follow the same 25% capacity guidelines. Groups are limited to six people are fewer, and those groups must be spaced at least six feet apart. Everyone in attendance must wear face coverings and there must be at least 20 feet of space between the performer and the audience, among other things.

Ginny Streeter, spokesperson for the Washington State Department of Health, also confirmed to the KREM 2 Verify Team that karaoke is allowed under Phase 2.

“I Just got clarification from the Governor’s office that karaoke is permitted (when all guidelines are followed) in Phase 2," she said in an email.

While karaoke might not seem significant in the grand scheme of Washington’s re-opening plans, for Bill Miller it’s a huge deal.

Miller owns the Rock Bar and Lounge in Spokane Valley. He said karaoke is a huge draw for his business.

“Oh, absolutely,” Miller said. “And, it will double the revenue for us on a given night now that we can do it again.”

Miller said his bar will have karaoke on Sunday from 7 p.m. - 10 p.m., then it will start being offers on Thursdays and Saturdays at the same time starting on Feb. 25.

We can verify that yes, according to state and local public health officials, karaoke is allowed under Phase 2 of the state’s reopening plan if all the guidelines are followed.