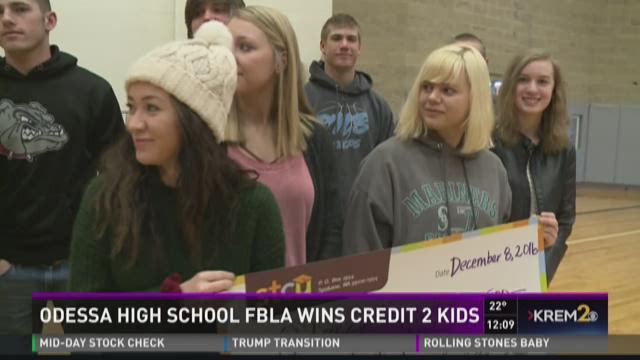 The senior FBLA members have made a tremendous impact on their community. Through their time in the club, they have evolved into leaders and community activists.

The seniors have competed against thousands of students and won at the National FBLA conference, placing 1st, 2nd, 4th, 5th, 7th and 8th place in the nation in several events. They managed to do this all while maintaining an average GPA of 3.78.

In the last two years, Odessa High School’s FBLA members have led two major service projects which allowed them to win the Lead 2 Feed Challenge and donate $25,000 to 2nd Harvest Food Bank, $12,500 to Okanogan’s Long-Term Recovery Group and $12,500 to Odessa Fire Department. On top of that, they won and donated $30,000 in laptops and iPads to the Odessa Elementary School.

The FBLA chapter has also completed other service projects including cooking and delivering 1,500 meals to the Mt. Tolman Fire Center in 2015 and raising over $12,000 to sponsor a Backpack Program to feed 40-60 children every weekend.

Congratulation, Odessa High School FBLA, you all are amazing!