What's next for Inslee? Six questions about his decision to run for governor answered

Wash. Gov. Jay Inslee announced that he was dropping out of the race for the 2020 Democratic Presidential Nomination to run for a third term as governor. 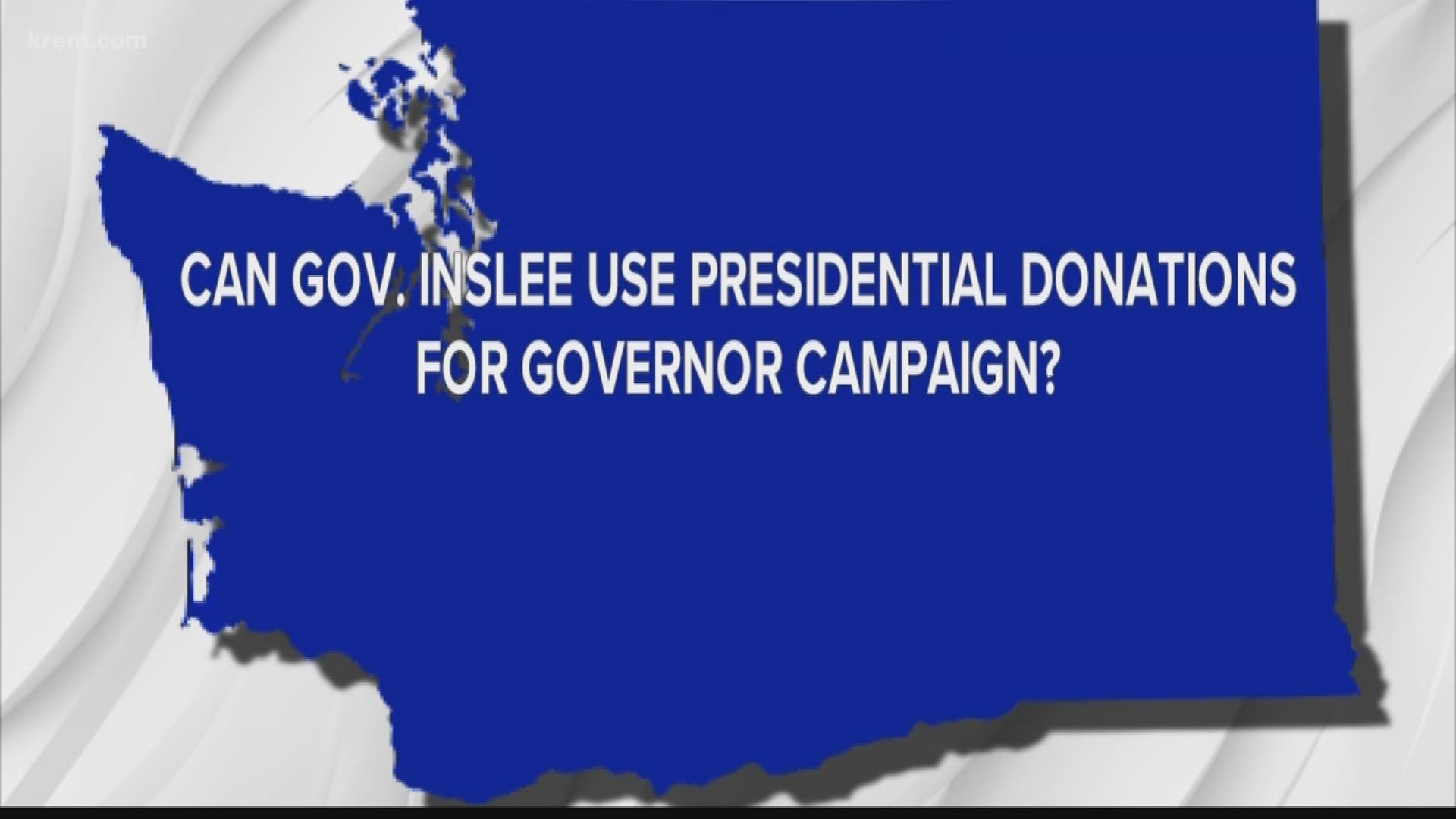 OLYMPIA, Wash. — Washington Governor Jay Inslee announced on Wednesday that he was dropping out of the race for the 2020 Democratic Presidential nomination because he didn't think he had a shot at winning.

On Thursday morning, he officially announced he was running for a third-term as governor in 2020.

The move raises a lot of questions about Inslee's political future in Washington and beyond, including what his future plans are for the state and what his chances are of being re-elected.

KREM took a dive into some of the biggest questions surrounding Inslee's future to try to find answers about what could happen to the governor going forward.

As of August 22, six candidates have filed with the Washington State Public Disclosure Commission as running for governor. One of those is Inslee, who filed on January 10, 2017, before he decided to run for president.

The other five include four Republicans and one Democrat, which we'll go through in alphabetical order by last name.

Loren Culp is listed as a Republican and filed for the race on July 19, 2019. Culp is currently the City of Republic Chief of Police, and calls for sending "common sense to Olympia."

He made headlines when he declared Republic a "sanctuary city" for gun laws after he announced he wouldn't be enforcing Initiative 1639, which introduced new gun laws regarding background checks and other regulations.

Philip Fortunato is also listed as a Republican and filed on August 1, 2019. He confirmed to KREM that he is running for governor.

The campaign slogan on his website reads "No More Business as Usual" and he said "it's time for a common sense Governor in Washington state."

Joshua Freed filed with the PDC as a Republican on August 8, 2019. KREM couldn't find a campaign website for Freed and he couldn't immediately be reached for confirmation he was still running.

Freed is listed in multiple news reports from Bothell area outlets as being a city councilor and mayor in Bothell.

Gene Hart represents the only other Democrat that has filed for the race. He filed with the PDC on December 3, 2018.

Hart confirmed to KREM that he is still running and doesn't plan on dropping out before the primary.

Anton Sakharov filed with the PDC on April 21, 2019, and is listed as a Republican. His website lists his campaign slogan as "Make Evergreen Evergreat."

Sakharov lists himself as a moderate conservative who previously lived in the Soviet Union. He doesn't list any previous political experience.

2. How many governors have served three terms in Washington?

Inslee is seeking a third term as Washington Governor, a feat only accomplished once before in the state's history.

The only politician to serve as a three-term governor in Washington state history is Daniel Jackson Evans, a Republican who was in office from 1965 to 1977.

According to United State Congressional records, he served in the United State Navy from 1943-1946 and became the president of Evergreen State College after his time as governor. He also was appointed then won a special election to fill an empty U.S. Senate seat in 1983. He served in the Senate for the rest of the term and didn't run for re-election in 1989.

Eight governors have served for two terms, including Inslee.

3. Can Inslee use funds from his presidential campaign in the governor race?

A big question surrounding Inslee in the wake of his announcements is whether or not he can use money from his newly ended presidential run for his campaign for governor.

The Federal Election Commission allows this so long as the state where the candidate is running allows it in their campaign finance laws, according to the FEC.

A Washington PDC spokesperson said that Inslee may use funds from his failed presidential run in this quest for a third term as governor, but only with the permission of the donor.

In addition to requiring Inslee, or any candidate in a similar position for that matter, to get permission from the donor to use their money in the governor's race, there are limits on how much a donor can give in each race, according to the PDC.

PDC regulations limit donors to $2,000 in donations during each election, according to a PDC spokesperson. However, this limit resets between the general and the primary.

Unless narrows down to two or fewer candidates by next August, a primary will be held.

4. Did his presidential run hurt his chances of re-election?

By running for president, Inslee received more attention in the national media than he previously had as Washington Governor, which led to people forming opinions both positively and negatively reflecting Inslee.

KREM couldn't locate any reputable polls specifically for the 2020 Washington Gubernatorial general or primary election, but as governor, polls have been tracking his approval rating in the state.

Morning Consult, which is widely seen as one of the most highly regarded approval polls for state governors, has tracked Inslee during his time as governor.

The Morning Consult numbers don't show much of a change for Inslee from before he announced his run for president to the latest numbers released.

Inslee announced his run for president on March 1, 2019. Morning Consult tracks approval ratings quarterly, and his announcement falls in the first quarter of 2019.

According to Morning Consult's approval ratings from the fourth quarter of 2018, the last before he decided to run for president, Inslee had a 44 percent approval rating among Washington voters compared to disapproval from 32 percent of voters. The rest were undecided or "didn't know."

By the first quarter of 2019, which is when Inslee announced his run, his approval rating had moved up to 47 percent, while his disapproval rating stayed at 32 percent.

In the latest numbers from the second quarter of 2019, which were taken before he dropped out, listed his approval rating as staying at 47 percent, but his disapproval rating raising slightly to 35 percent.

5. What are Inslee's plans for Washington if he wins a third term?

Inslee's focus has been the presidential race since March, so he hasn't released much about state-level plans for Washington state.

His campaign website has cleared out since he announced he was dropping out of the presidential race and entering the race for governor, with the only page working being a donation portal on the front page.

However, Inslee did give some hints in his campaign announcements for his future plans in office.

"The state of Washington has provided the nation a roadmap [sic] for climate action, innovation, and economic growth. And we're not done yet," Inslee wrote in a series of tweets. "I want to continue to stand with you in opposing Donald Trump and rejecting his hurtful and divisive agenda, while strengthening and enhancing Washington state’s role as a progressive beacon for the nation. "

These tweets seem to indicate Inslee would focus on climate change policies, technology and the economy. The reference to President Donald Trump also seems to suggest he would continue to encourage his attorney general to file lawsuits against the Trump Administration.

Inslee's current AG, Bob Ferguson, has filed 40 suits against the Trump Administration, according to the Washington AG website.

6. Will he receive a cabinet position if a Democrat wins the 2020 Presidential Election?

Inslee's chances at being named to a presidential cabinet position if a Democrat wins in 2020 has been thrown around by the national media its fair share of times since Inslee announced his run for the presidency.

None of the candidates running for the Democratic nomination have announced plans for cabinet positions yet, so its impossible to say for sure whether Inslee would receive a nod for a cabinet position or if he would accept it if he was serving as governor.

Several candidates gave their thanks and praised Inslee for his campaign on Twitter after he announced he was dropping out.

Massachusetts Senator Elizabeth Warren thanked Inslee for his campaign and promised to "keep fighting alongside you" on climate change.

Vermont Senator Bernie Sanders congratulated Inslee on his campaign and said there is "no more important issue facing humanity" than climate change.

Inslee didn't endorse any of the candidates during his appearance on The Rachel Maddow Show on MSNBC on Wednesday night, which is where he first announced he was dropping out of the race.

Secretary of the Interior and Administrator of the Environmental Protection Agency, or EPA, have been the two cabinet positions most talked about in relation to Inslee.

RELATED: Who is running for president in 2020?

The following is a report on Inslee's performance in the first presidential debate.