Voting in Texas: Security and safety at the polls and after they close

Despite a recent string of vandalism, the Travis County clerk and an APD assistant chief both say it's safe to go out and vote. 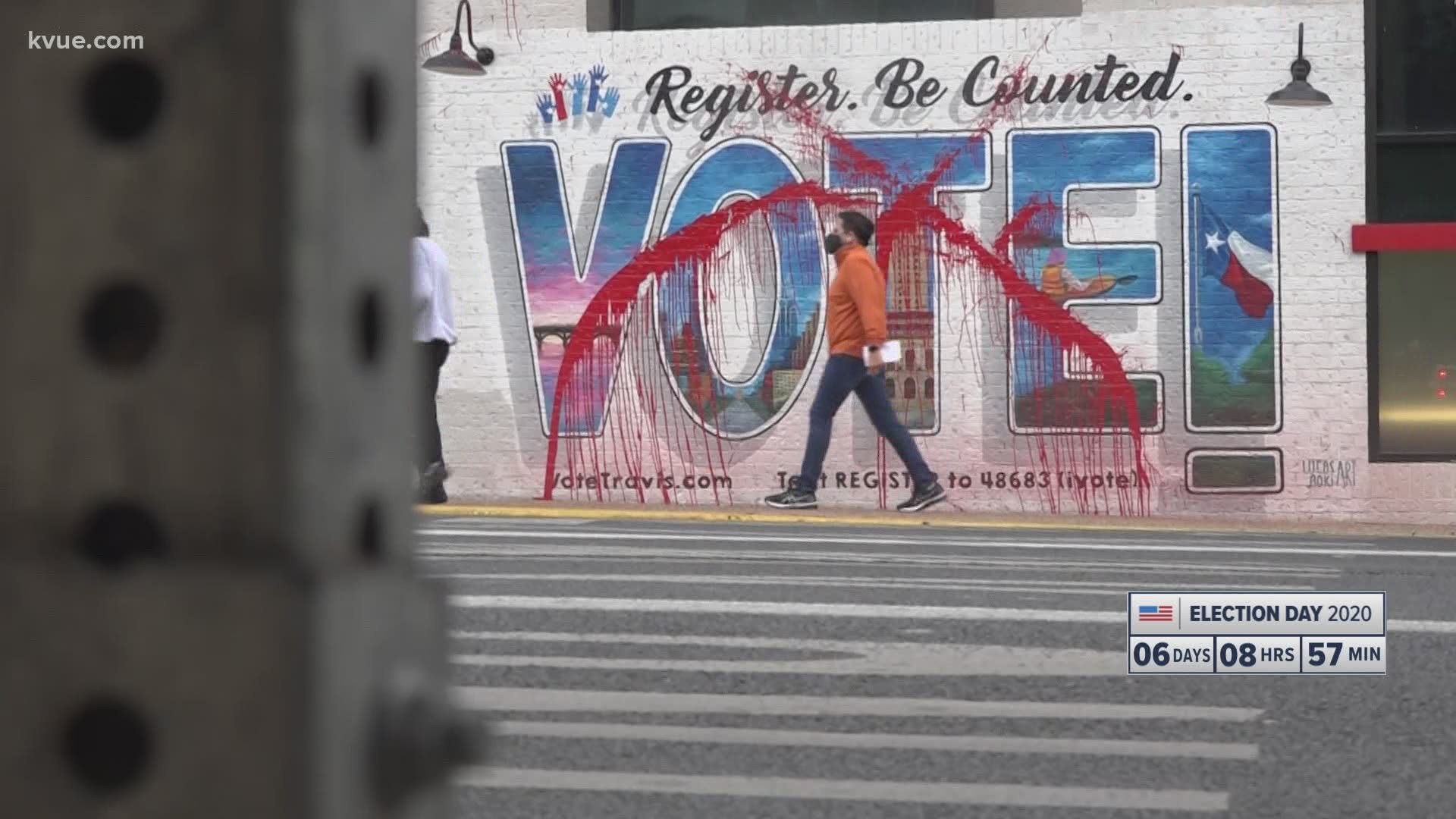 AUSTIN, Texas — Red splattered paint broke the orange theme of the University of Texas at Austin campus on Monday, as a mural that encourages people to vote remained vandalized.

It was a similar scene downtown at a popular polling place, the Austin Public Library, where Austinites eager to cast their ballots walked past a giant red paint splatter and covered-up words on the side of the building. Division Manager Sharon Herfurth told KVUE that the vandalism did not impact voting operations.

Further south on South Lamar Boulevard, another mural encouraging voters – sponsored by the HOPE Campaign – was also vandalized earlier this month. It has since been cleaned up.

But could the graffiti paint a preview of what's to come after the election this year?

"Some minor vandalism and sign wars happen every single election, so I don’t really [see] anything particularly different this time," DeBeauvoir said. "My advice to the vandals is, 'Oh, grow up.'"

Joseph Chacon, an assistant chief with the Austin Police Department, said he feels people should feel safe going to the polls despite the vandalism.

"I feel very good about people going out to be able to vote, to vote safely, to exercise their constitutional rights to vote and that they can do so without fear of, you know, of any kind of intimidation or any kind of threat," Chacon said. "If they were to experience that, they need to notify the officials that are at the polling place. And we would respond if, if the officials can't take care of it there immediately. We have not had any kind of real reports to that kind of thing happening. So, that's why I say with confidence that I think that people can go out and exercise their right to vote with, you know, without any kind of fear."

DeBeauvoir said election officials go through training to handle any sort of issues that may occur at the polls.

"Everything from inconveniences and spills to what if you have some sort of really ugly confrontation going on," DeBeauvoir said.

She added that they work with the local sheriff's offices and police departments to make sure deputies and officers know where the polling locations are.

"People have been able to go and vote to – you know, the lines are long, but people are doing very well with the COVID restrictions and peacefully waiting in line and exercising their right to vote. I have no information to say that should not continue. I really do believe that people are safe to go out and vote," Chacon said.

As for what happens after the election, Chacon said APD typically keeps an eye on things like large gatherings due to the results following every election cycle.

A report from the San Antonio Express-News said up to 1,000 National Guard troops will be activated for post-election disturbances, with Austin being one of the cities those troops would go to.

Chacon said the police department is prepared if needed, but no information at this time indicates any plans for large gatherings after the election.

"We are staying in a communication with our public safety partners, including DPS and the Travis County Sheriff's Office, to make sure that they know – we're all kind of coordinating with one another. Everybody knows what the other one has in place, has ready to respond in case we have large mass gatherings or any kind of problems that might occur post-election," Chacon said. "At this time, we do not have any information that anything is planned. And right now, we are hoping that the polls, polls will close and then the process will play itself out to tell us who has won in each one of the races. But we have no information that would tell us right now that there's going to be any kind of illegal activity or large mass gatherings."

While Chacon said officers will be ready to respond if needed, there are also no plans to call in additional officers.

"We are really in a state of preparedness. There is no plan to mobilize additional officers," Chacon said. "What we are doing is the officers that are on duty that normally might be in an office setting or in some plainclothes-type assignment will all be in uniform and ready to respond at a moment's notice with their gear. If something were to pop up ... people can certainly gather and protest. That is not against the law. They just have to be mindful of not blocking roadways and, obviously, not causing property damage, not doing violence to somebody else or something like that."

'If we experience a surge during Thanksgiving, it will not be over by Christmas' | Health officials warn public amid bleak COVID-19 projections