2020 Election: The impact of the Latino vote in Texas

Some experts say who Latinos or Hispanics vote for in the election could make a big impact. 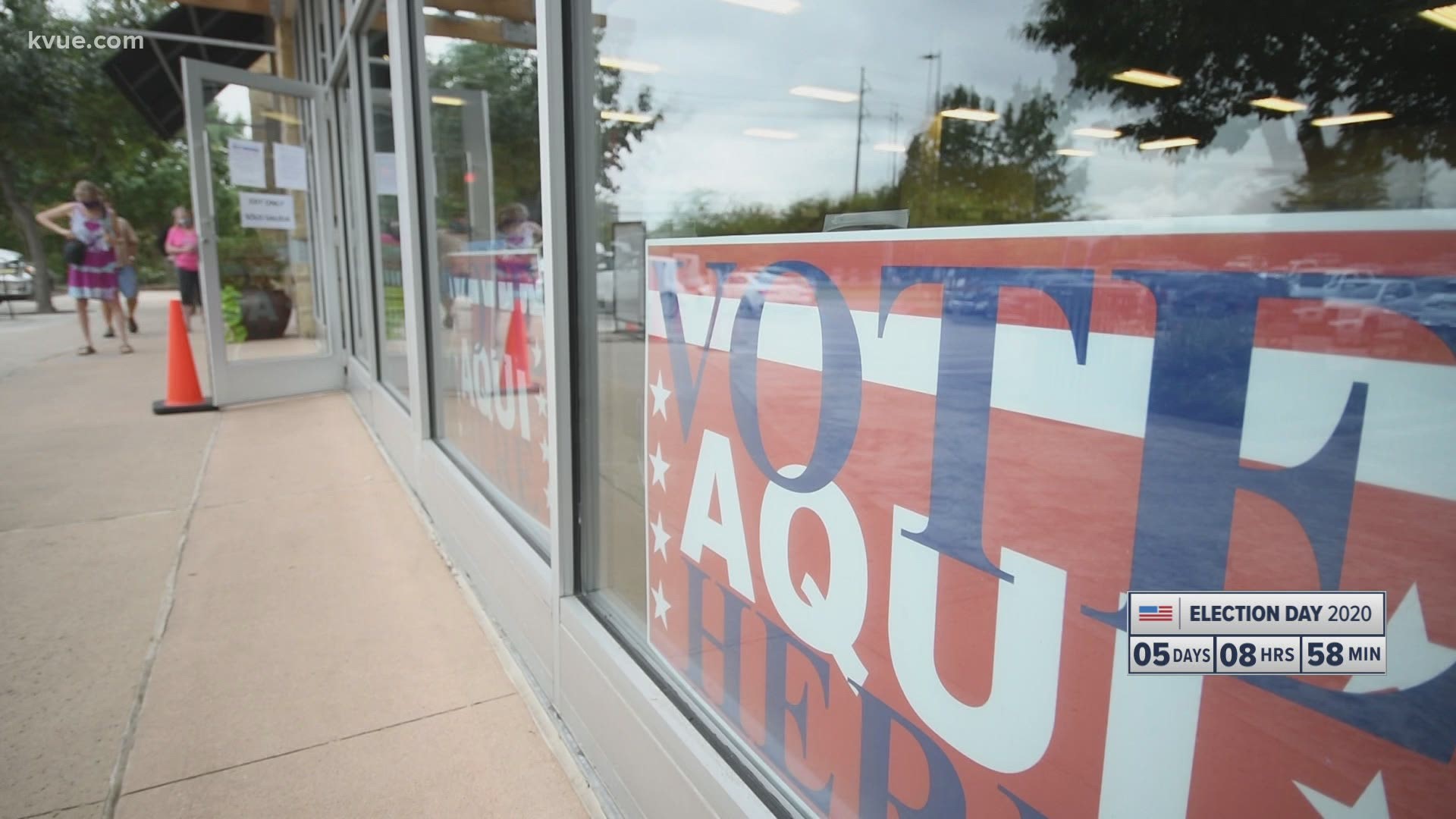 AUSTIN, Texas — As Texans continue to show up to the polls in droves, a demographic that is on the minds of experts is Latinos and Hispanics and how they'll vote in this election.

Some say who Latinos or Hispanics vote for in the election could make a big impact.

"The future of really winning power in Texas is going to be huge on winning the Hispanic, Mexican-origin popular vote in Texas," said Peter Ward, the C.B. Smith Sr. Centennial Chair in U.S.-Mexico Relations and a professor of public affairs and sociology at the University of Texas at Austin. "I mean, because the Hispanic population is the most rapidly expanding population, that's the population that really is up for grabs."

According to the U.S. Census Bureau, 39.7% of Texas's nearly 29 million residents are Hispanic or Latino.

States behind Texas but in the top five are Florida, New York and Arizona.

When it comes to who Latinos or Hispanics have voted for in recent elections, according to the Pew Research Center – which used exit poll data conducted by Edison Research for the National Election Pool – in the U.S., 66% of Latinos voted for Hillary Clinton in 2016, with 28% voting for President Donald Trump.

When it comes to the amount of immigrant-eligible voters in Texas, 52% are Hispanic, 29% are Asian, 12% are white and 7% are Black.

Country of origin could impact the way Latinos or Hispanics vote

Experts say where Latinos or Hispanics are originally from could shape how they vote in the U.S. presidential elections.

"That plays a crucial role. So, for example, Cubans are traditionally more conservative, more likely to vote Republican," said Raul Madrid, a professor in the Department of Government at UT who specializes in Latin American politics, among other things. "Mexicans are more liberal, more likely to vote Democrat. [The] same is true of Puerto Ricans. Central Americans in general tend to vote more Democrat. But whereas some people from some South American countries like Venezuela tend to be more conservative. Some of that is part of [their] experience of growing up or under the regimes that they grew up under."

Ward referenced the difference between the political cultures of the U.S. and Mexico as an example.

Madrid also added why he believes Latinos may vote for President Trump this election.

"Well, remember, we're talking about a minority of Latinos," Madrid said. "Male Latinos are more likely to support Trump than female Latinas. Some of that, I think, has to do with the tradition of populism in Latin America, which has been a oh, oh, fairly effective mode of campaigning and governing."

Ruth Wasem, a professor of public policy practice at UT's LBJ School of Public Affairs, said she believes there is every reason to think that not just Latinos, but all immigrants are shaped by where they came from and the circumstances under which they migrated.

"If you're an economic migrant who came over here already with a good job and a good education, I have found that those individuals are much more likely to naturalize because the requirements for naturalization – which is knowing English, understanding U.S. civics and just the different procedures – are easier for them to accomplish than for someone who might be working full time and not have access to English language classes," Wasem said. "Another big difference is the politics in your home country and whether you have come from a situation that was highly charged politically, like a civil war or revolution or fleeing a repressive government. Clearly, those things shape you."

Madrid told KVUE in an early October interview that it is easier to vote in Latin America in some cases than in the U.S.

"People are oftentimes automatically registered to vote. You don't have to sign up. And in some cases, as I mentioned, voting is compulsory in Latin America," Madrid said.

He added that it takes longer for people to register to vote in the U.S., which could get in the way of the Latino vote.

"You need to fill out the form ... For example, if you change your address, you need to fill out another form, etc. So, it's not an automatic, easy process. And that has gotten in the way of the Latino vote. And, of course, some Latinos who live in Austin are not eligible to vote. And so, that's also a factor," Madrid said.

WATCH: A look at the importance of the Hispanic vote in Texas

Wasem recently published an analysis, much of it citing data from the New American Economy Index. In one of the sections, she looked at civic participation among four major Texas cities: Austin, San Antonio, Houston and Dallas.

"And Austin has the lowest score of civic engagement. So, that's going to be one of the things the City of Austin needs to work on," Wasem said.

That score, she said, could impact voter turnout.

"Well, it could affect turnout and the extent to which Latinos are engaged here in Austin in the election," she said.

However, she added that it's important to take into account that the data is always time-limited and another study showed that civic engagement is growing.

"So, I would say the trend in Austin, I have every reason to think that that that trajectory of increased civic engagement is already happening," Wasem said. "Not that more can't be done to increase civic engagement. But if people are not citizens, if they have not naturalized and registered to vote, obviously, that makes a difference."

A copy of Wasem's analysis can be viewed below:

The City of Austin has resources that explain how citizens can participate civically, like participating in a city council meeting.

Casis Elementary principal to return after being placed on leave

More young Texans showing up to the polls compared to 2016