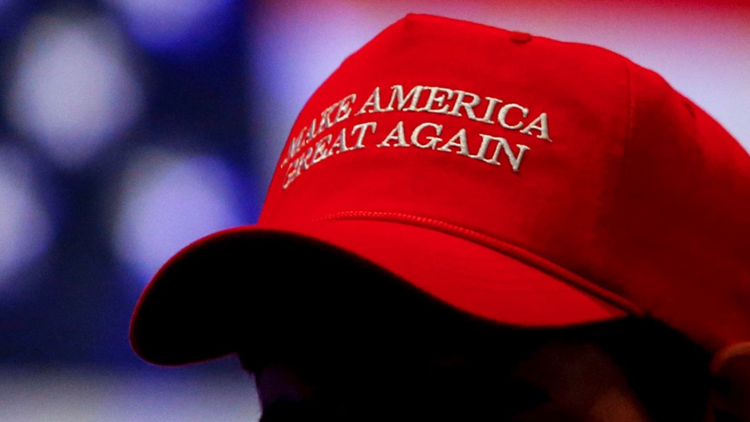 Photo by: AP Photo/Butch Dill
In this Nov. 6, 2018, a man wears a hat with President Donald Trump's campaign slogan in Montgomery, Ala.

SPOKANE, Wash. — A Gonzaga University Law School professor's commentary piece about his reaction to a student wearing a 'MAGA' hat in class has caused a stir online and in the Spokane community.

Jeffrey Omari, a visiting assistant professor, wrote an essay entitled 'Seeing Red: A professor coexists with 'MAGA' in the classroom' for the American Bar Association Journal.

The piece goes into detail about Omari's reaction to seeing a male student wear a red hat with the acronym 'MAGA' on it - short for President Trump's slogan "Make America Great Again" - to his class.

"From my (progressive) perspective as a black man living in the increasingly polarized political climate that is America, MAGA is an undeniable symbol of white supremacy and hatred toward certain nonwhite groups," Omari wrote.

Omari wrote later in the piece that he didn't believe the student was trying to direct a hateful message toward him and that he respected the student's freedom of expression, but that "his shiny red MAGA hat was like a siren spewing derogatory racial obscenities at me for the duration of the one hour and fifteen-minute class."

This portion has caused a stir online, with political blogs picking up the piece and some responses to it.

Jonathan Turley, a law professor at George Washington University who also acts as a legal analyst for broadcast and print journalism outlets, posted a column on his blog in response to Omari's piece.

Turley questioned Omari's assessment of the hat as a "symbol of white supremacy" and called his point "frivolous" in response to Omari's claim in the original piece that expecting a white student to stand up to their classmate in the 'MAGA' hat "frivolous."

Turley also responded to Omari's words about it being an uphill battle to ask the student to remove the hat, which Omari concludes would be due to him [Omari] being African-American and his position as a non-tenured faculty member.

"Of course, it would have been an “uphill battle” to ask for the removal of the hat unless he was asking for the removal of all hats and clothing of all political viewpoints from Antifa hats to pro-choice hats to NRA hats," Turley wrote. "Omari assumed that the interpretation of the hat (which is not shared by many) was manifestly true. This is part of the trend that we have discussed on campuses where speech is being curtailed as racist or microaggressive based on how it is perceived by others as opposed to how it is intended. "

Gonzaga University School of Law Dean Jacob H. Rooksby issued the following statement in regards to Omari's piece and the coverage surrounding it.

"The School of Law diligently works to provide a respectful and inclusive environment that welcomes all students, faculty, and staff. We respect the points of view of all members of our community. This situation presents an opportunity for our community to listen to and learn from each other," the statement reads in full.