The controversial initiative sponsor is facing record fines and other penalties after a years-long prosecution for campaign finance violations. 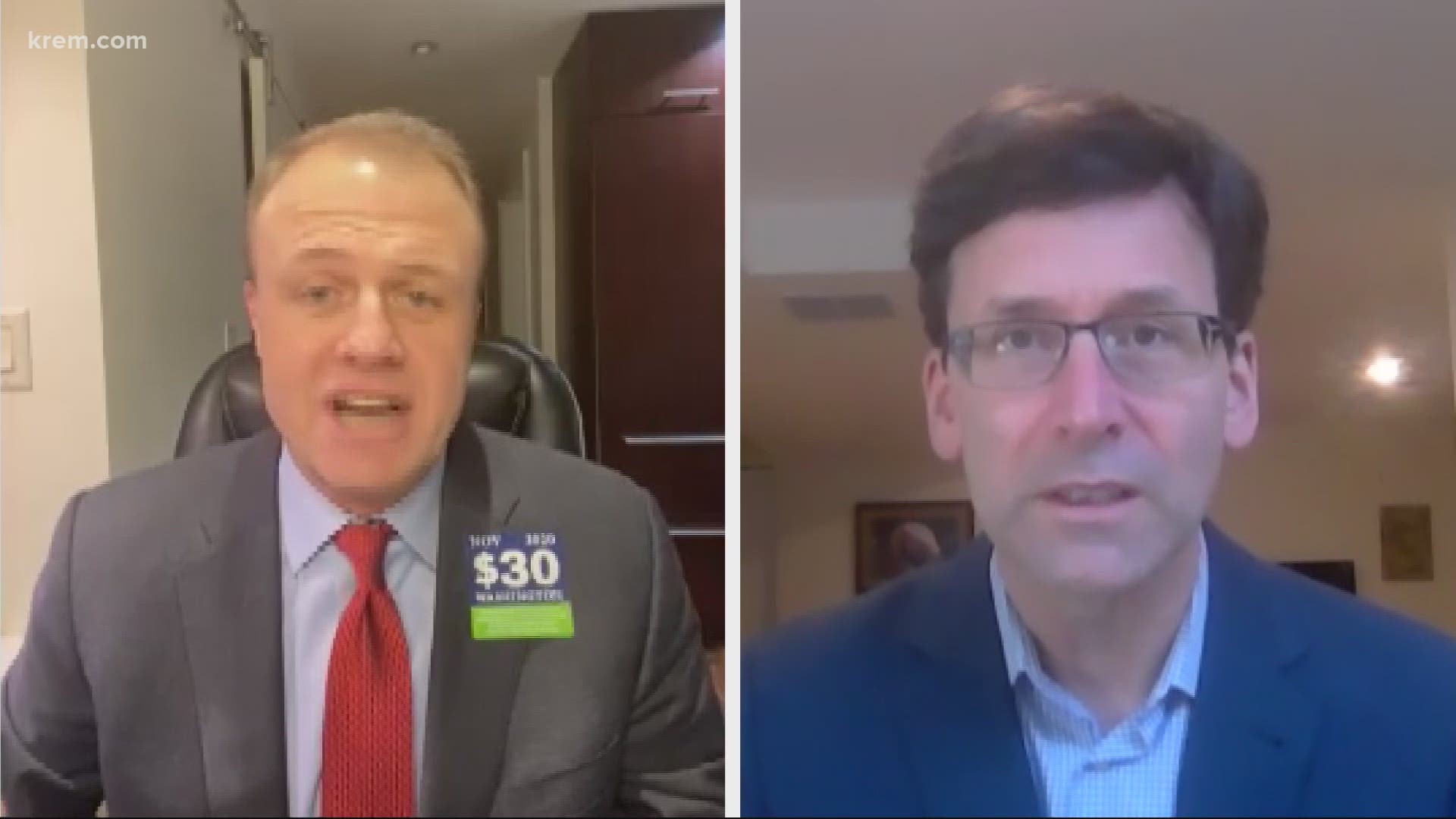 SPOKANE, Wash. — Most people who are politically inclined run for office, but Tim Eyman made a name for himself in Washington politics a different way: by promoting ballot measures.

Eyman's work began in the late 90s, most notably promoting an initiative to limit car tab fees to $30. The measure passed, but was later struck down by the state supreme court.

In the last 22 years, Eyman has gotten 17 initiatives on Washington state ballots, most of them having something to do with limiting taxes. Voters have approved 11 of them. Nine of those were at least partially invalidated by the courts.

"It's the ideas that matter," he said. "But those ideas aren't going to get on the ballot unless you have some kind of masochist like I am that's willing to throw myself into the mosh pit of politics, and be willing to take all the hits."

But Eyman's disputes in court haven't just been limited to his ballot measures.

In 2002, he reached a settlement for secretly funneling political donations to his personal accounts. The settlement barred him from ever being a treasurer on a political committee again, but not from running such committees.

For the last several years, the office of Washington State Attorney General Bob Ferguson has been investigating Eyman for a series of campaign finance violations, all centered around Eyman funneling donations back to himself.

"He tearfully confessed to it [in 2002], said he'd been living a lie and receiving illegal kickbacks, and said he'd never do it again," said Ferguson in an interview with KREM. "Well, guess what? He turned right around and did it all over again."

It is legal for people like Eyman to take a salary, but they have to disclose it.

In this month's ruling, the judge found Eyman took hundreds of thousands of dollars that he didn't properly disclose.

"That's what... I just, for what it's worth, find so puzzling about this," said Ferguson. "Tim Eyman could have done all this legally. In other words, he could have had a career, paid himself a salary, disclosed that salary, and people would know that he was getting a salary."

The ruling also found Eyman orchestrated a kickback scheme to pay himself even more money.

For one of his initiatives, he hired a signature gathering firm. In fundraising emails, Eyman exaggerated how much that firm was charging. He then used donations to pay the firm more than they asked for. That excess was in turn paid back to Eyman.

Eyman now claims the money the firm paid him was an above-board consulting fee.

"I approached them and said, 'Would it be OK if you hired me to get future clients for you?'," Eyman said.

Court records show that when asked about that transaction in his deposition, Eyman plead the fifth amendment. When asked why, he told KREM "I was not represented by counsel at that time."

"All I care about is the law, and what you say in court when you're under oath," said Ferguson.

Eyman also said that at the end of the day, the donors he's accused of defrauding were happy with the outcomes they got from their donations.

"On average, we've spent half what other people end up spending to qualify their initiatives for the ballot," he said.

Eyman said he's never had a donor complain about where their money went or ask for their donation to be returned.

"Never," he said. "It was given directly to me. I didn't take anybody's money. Every single dollar I've ever received was given to me voluntarily by willing people."

"It doesn't matter what his donors thought or think now," said Ferguson. "There is a law that says if you're going to be involved in the political process, like myself, or like Tim Eyman, you've got to disclose the money that comes in, the money you receive, and where it goes."

The ruling is years in the making.

"It's been a long road to get to, really, a day of reckoning for Tim Eyman, but that day finally came," said Ferguson.

"For the last eight and a half years, I have been investigated, litigated, and persecuted by the attorney general's office," said Eyman.

In the process, Eyman declared bankruptcy, and much of his fundraising efforts have been for his own legal defense fund.

"I've lost everything I've ever had in my entire life," he said.

But Ferguson said it's Eyman himself who made the process so lengthy and expensive.

"It's his own fault. He wouldn't turn over documents," said Ferguson. "That's why he's had to pay hundreds of thousands of dollars in contempt fines. And frankly, that's why it took so long to have our day in court."

So, what was the actual result of that day in court? Well, for one, a $2.6 million fine.

"I don't have it. I'll never have it," said Eyman. "It's almost ridiculous. Why not make it eighty million and call it a day?"

But Eyman does have an agreement with the state to begin to pay down his debts, and Ferguson said he intends to collect.

The second result of the ruling is that Eyman is now barred from ever controlling the finances of a political committee again.

During the trial, Eyman said that such a ruling would end his career in initiative sponsoring. But, the same week of the ruling, he was back advocating for another anti-tax measure.

"I'm going full steam ahead with it," he said. "But I mean, we have a team, we're going to be very careful to make sure that we do everything right."

"I can assure you and the people this state in absolutely no uncertain terms that we will be scrutinizing Tim Eyman's finances for a very, very long time," said Ferguson.

Eyman is also still raising money for his legal defense fund, gearing up for an appeal.

"He just lost on every single issue throughout the case. He has zero chance on appeal," said Ferguson. "He's not gonna reverse that $2.6 million penalty."

One thing is abundantly clear, neither Bob Ferguson nor Tim Eyman intends on backing down any time soon.

"As long as I am attorney general, we will be tracking him very closely," said Ferguson.

"I've been an activist in the state of Washington for 22 years. I'm 55 years old. I'm going to do it until the day I die," said Eyman. "As long as I have air in my lungs and enough intestinal fortitude to keep with it, and the muscle power and persistence, I'm going to keep doing it if for no other reason than just spite."