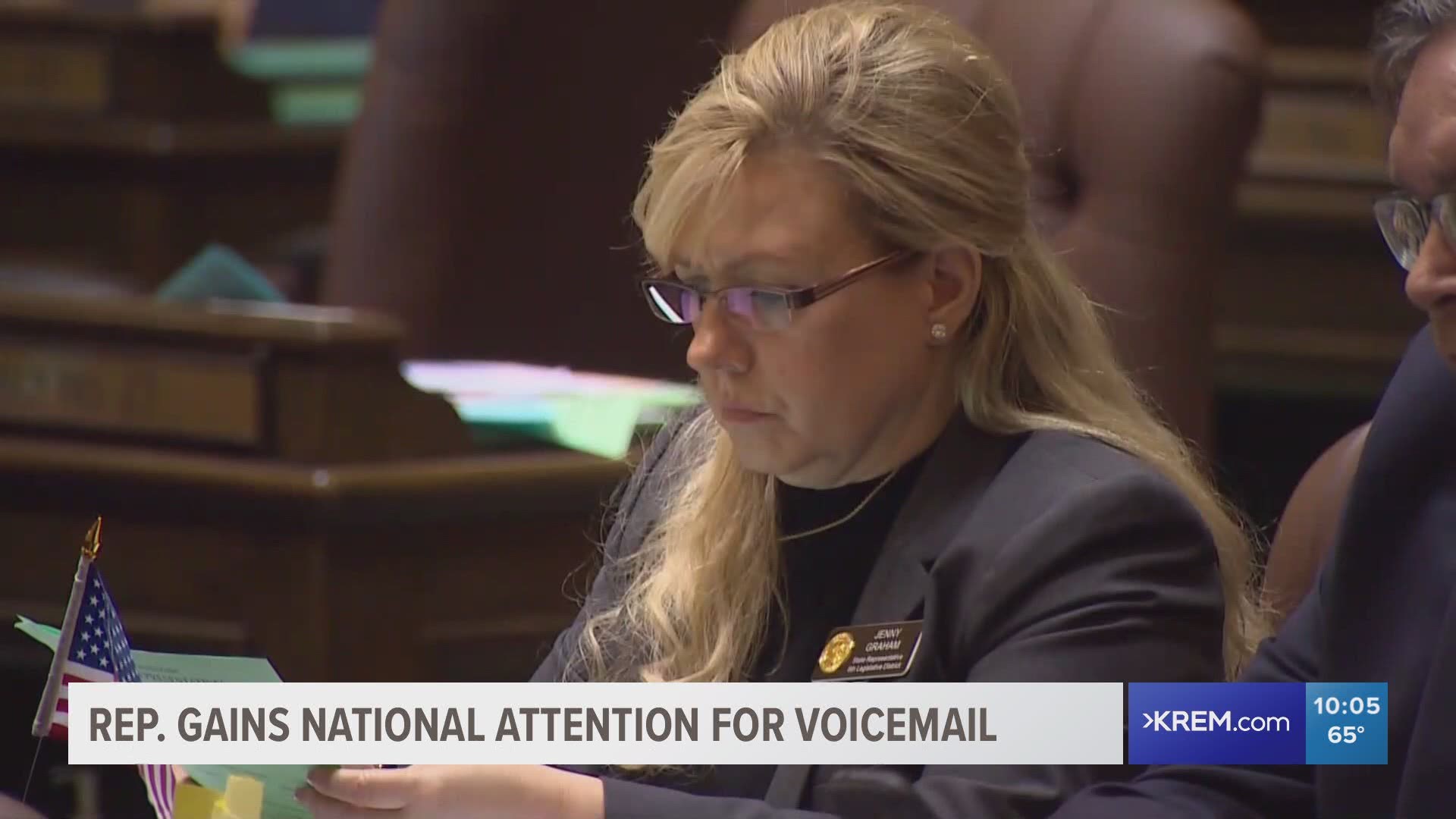 SPOKANE, Wash — As a longtime reporter for the Inlander, Daniel Walters has had politicians get mad at him before. But the voicemail he got from Rep. Jenny Graham (R-Spokane) took things to a new level.

"Daniel you lying piece of s---," she yelled into the phone in audio published on the alt-weekly's site. "You've done it. You have started it. Don't you ever call me again."

The call was in reaction to an August piece Walters had written about Graham's tendency to link to conspiracy-laden websites on her Facebook account.

For Graham, the issue of sex trafficking is a personal one. Her sister was trafficked as a child and later murdered by the Green River Killer, so it's unsurprising that she often posts passionately about the issue of trafficking.

But when she does, the posts are often accompanied by links and, as Walters reported, those links sometimes go to sites that promote conspiracy theories about 9/11, demons and inter-dimensional reptilian-human hybrids.

"The idea of sex trafficking, human trafficking is... especially when it comes to children... some of the most horrifying things we can possibly imagine. And so, of course, you want to be against that and rally against that," Walters said in an interview with KREM. "But in doing so a lot of people are getting really, really sloppy. And if they're not actively promoting the conspiracy theories, they're paving the way, or sending people toward these conspiracy theories, even without knowing it."

That seemed to be the case with Graham, as Walters wrote in August. She wasn't purposefully spreading these theories, but she was still an elected official giving them a signal boost in a time when misinformation is already running rampant.

"You tell your buddies not to call me either," the voicemail continued. "It's on. If you think for one minute you're going to pull this crap and you're going to walk away from it, you're nuts."

"At least 15 different Facebook posts over several days, attacking me and making all sorts of accusations... false accusations.... against me and my reporting," Walters said. "I haven't had that happen [before]."

He reached out to Graham repeatedly, asking for her to name a specific complaint she had about the story. She didn't offer one.

KREM reached out as well. Graham still did not name any specific problem with the article and said she is not giving interviews to Spokane press. She also did not offer comment on a Washington Post article on her attacks.The only member of the media the Spokane lawmaker has spoken to since the voicemail was made public appears to be a TV reporter in Seattle.

Her posts on Facebook seem to accuse Walters of minimizing the issue of human trafficking. In early August, Walters wrote an extensive report on that topic, in which professional anti-trafficking advocates said conspiracy-rooted panic has in fact made their jobs more difficult.

"It's unfair to suggest that I am dismissive of... what she went through with her sister, because I've written about that before," Walters said. "And it's unfair to suggest that I'm dismissive of the issue of human trafficking because part of the reason why I write these sorts of things is to make sure that people understand the bulk of the reality of human trafficking, as opposed to just seizing upon the most horrifying anecdotes."

Walters says the reaction to his story is also indicative of a general decline in trust for traditional media, and that to combat that, journalists will need to start more aggressively and transparently defending their reporting.

"We're going to have to, more and more, show our receipts and show our work," he said. "Respond saying, 'OK: Here's what we wrote. Here's why we wrote it. Here's the evidence.'"

The Inlander published the full 78-minute long interview between Walters and Graham.