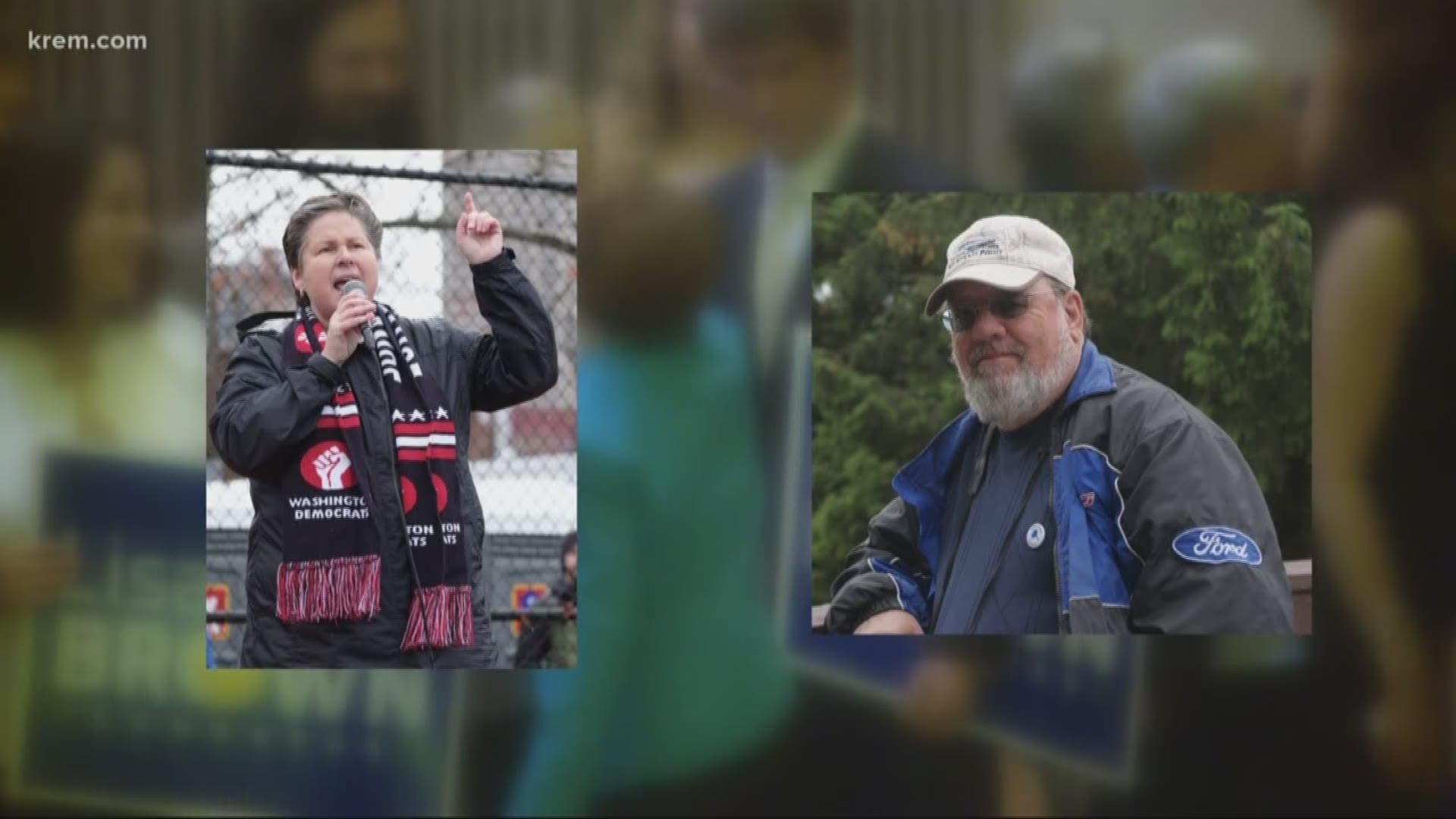 Wood, along with the three other leadership members of the county party, resigned in a letter dated Saturday, June 13 and posted on the party website. The Spokane County Democrats posted today that it would be holding a meeting on July 11 to elect new leadership.

"I went to the other three executive officers and said, 'I'm done. I'm done.' I have no faith in the leadership of the state party. I don't at all," Wood said.

Wood said the reason he resigned and "lost faith" in Podlodowski's leadership, as the state chair has to do with her handling of a complaint made against him at the county level. Podlodowski said there have been three "very credible code of conduct complaints" against Wood in the last six months and that he was found "in violation."

KREM asked both Wood and Podlodowski about the specifics of the complaints, but both cited confidentiality issues.

Wood claimed that when the grievances filed against him were passed along to the state party, Podlodowski didn't inform him of the specifics of the allegations and failed to communicate with him about the process.

"That's why I stepped down and...believe me, I hate what this could potentially do to some of our wonderful candidates, but I think I did this at the right time," Wood said.

But Podlodowski disputed Woods account, saying he's known about the concerns for some time.

"He's been aware of the issues and concerns related to the specific complaints since December of 2019," she said. "But honestly, they're no different from issues that we've discussed with him in both 2018, 2019, and now 2020."

Communication issues over the allegations aren't the only things the two disagreed about. In fact, Wood and Podlodowski disagreed about most of the circumstances surrounding Wood's departure.

While Podlodowski and Wood both said that the county party was sending the grievances back to the state party, they differed on the reason why. The state chair said the Spokane County Democratic Party Grievance Committee was "unable or unwilling to deal" with the complaints. But Wood said the person that made the complaint decided not to fill out proper paperwork to start the grievance process at the county level, leading it to be passed on to the state.

RELATED: Matt Shea vows to get 51st State on the ballot at 'Liberate America' event

Another sticking point between the two came when Wood said the Spokane County Democratic Party was told by Podlodowski that local nonprofits and other community organizations that they "can't work" with the county party's leadership.

Podlodowski said that she had heard complaints from these groups.

But Wood said that he talked to the leader of one those groups in particular - Spokane NAACP President Kurtis Robinson - who he said denied that he voiced concerns about working with him.

"I've met with Kurtis Robinson and Ben Stuckart...and he doesn't have a problem with me, and he flat told the state part chair [Podlodowski], that he says 'I've never said I can't work with the Spokane Dems," Wood said.

Robinson told KREM that, while he didn't have problems working with Wood and the Spokane County Democrats, that he did voice concerns about the treatment of "persons of color...the LGBTQ [community] and the formerly incarcerated" under his leadership.

"He came to me and said, 'Hey, you guys said you didn't want to work with us?' And I said, 'No, that's not true. We have concerns about what's going on with these complaints, and the lack of engagement and lack of response from you, all the way up until this time,'" Robinson told KREM.

But even despite their dispute, Podlodowski expressed gratitude for Wood's work for the party and that she still thinks he's a "good person."

"Ed Wood is somebody who's done, just yeoman's work, for the state party," she said. "I think he's someone who's a good person. This is not about who he is as a person, but t's about behaviors and behaviors that, as a chair, when you think about the Democratic Party, we're not divorced from our values, and we have strong values of inclusion and equity and equality in the work that we do."