Gowdy, hired by Rolling Stone, documented the violence at the U.S. Capitol on Jan. 6 and plans to be back for Inauguration Day. 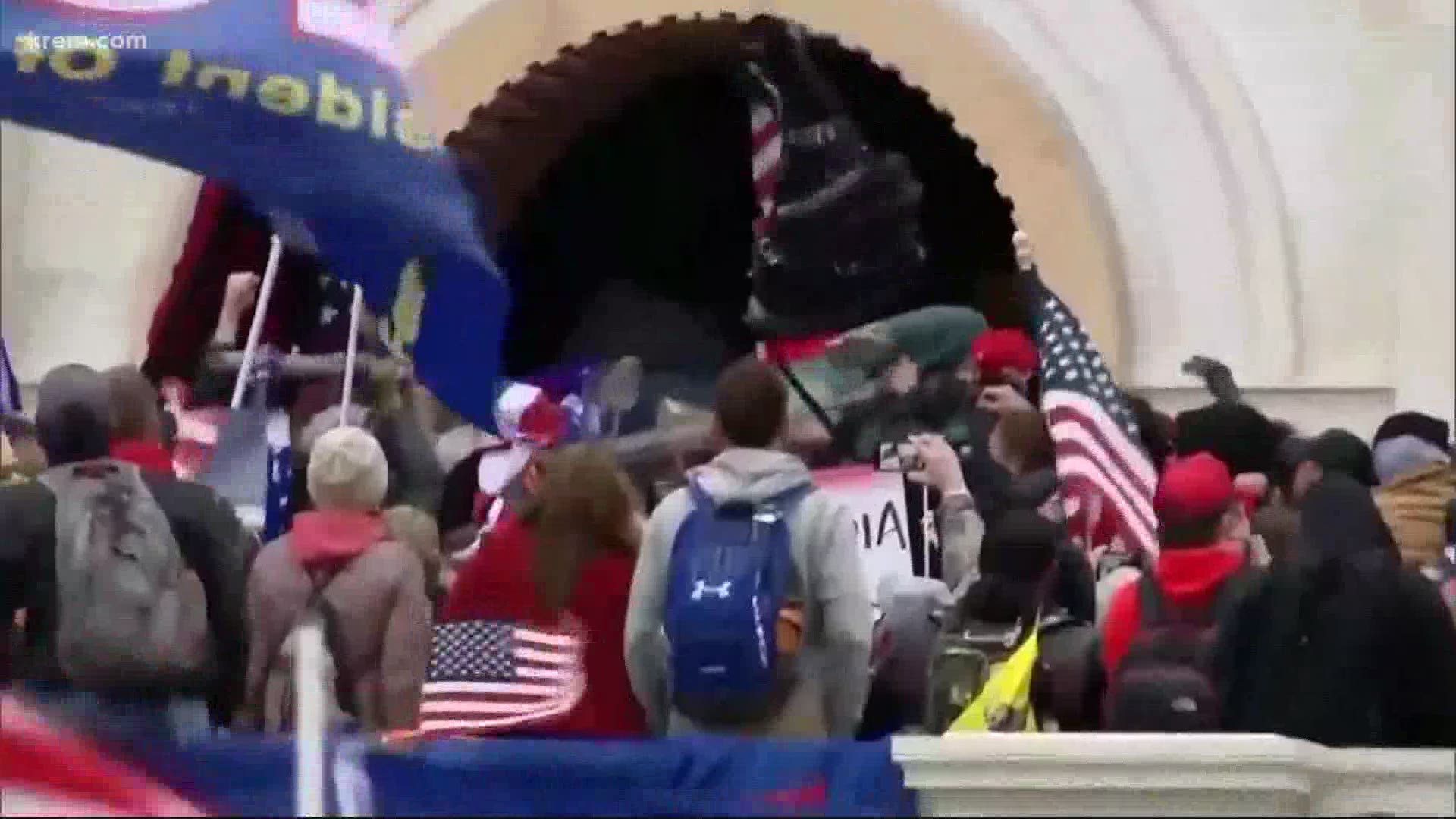 When Nate Gowdy showed up in Washington, D.C. on Jan. 6, he was prepared to photograph supporters at President Trump's rally, just as he had done more than two dozen times before.

But this time, the crowd was different.

"I was walking toward the Washington Monument where I'm hearing noise," said Gowdy. "And I passed the contingent of what I assume were Proud Boys, slash militiamen. They were marching, essentially in formation, toward the Capitol."

The Seattle-based photographer was hired by Rolling Stone to document the scene outside the U.S. Capitol. Eventually, he said, the group converged with a larger crowd at the U.S. Capitol building and that's when things became violent.

"I had no idea what we were in for. But it started becoming clear once the first layer of barricades were breached," explained Gowdy. "I saw an AP, an Associated Press photojournalist. He was being roughed up and he was pushed off this five-foot wall. I got a few stills of that, and I didn't get too close, because I was afraid they'd turn on me."

As the violent mob moved in, Gowdy stayed back, documenting the sea of faces, emotion and chaos -- right at the very spot the inaugural stage would be.

"Basically, we're used to seeing, you know, a lot of decorum and etiquette and very, very ceremonial. And this was... this was anarchy," said Gowdy.

It's a scene he never imagined he'd be a part of when he started his business of shooting weddings and corporate headshots.

But in 2015, ahead of the last presidential election, Gowdy started spending his own money to travel to the rallies of the candidates.

His image of Sen. Bernie Sanders at an event in California made the cover of TIME Magazine.

"My dad asked me, 'How are you paying for this?' And I said, 'Well, I have just enough money.' That meant I was sleeping in my rental cars, you know, in the dead of winter, and I was doing whatever it took to get where I could," said Gowdy.

His passion for documenting, not just the politicians, but their supporters, is what fueled him to cover 300 events in 23 states and Washington D.C., including 30 official Trump rallies.

"People responded to the images, which are about humanizing all the people involved in this spectacle... these rallies on both sides of the ends of the spectrum," explained Gowdy.

The 90,000 images he's captured over the last four years of Trump's presidency will be curated in a book called "Vote American! Presidential Politics and Protest in the Age of Trump."

But Gowdy almost lost all of the historical images he captured.

Reeling from an emotional day, he accidentally left his bag with all his camera gear and memory cards sitting at the train station. He thought he would never see it again.

"All my photos from the runoffs in Georgia, as well as the attack on the Capitol... it was devastating," recalled Gowdy. "I had a meltdown and it was just really hard."

People from Seattle pitched in with donations to help him replace his gear. In an unexpected twist, a friend across the country had seen his camera gear posted for sale online and contacted the seller.

Amtrak Police stepped in and helped recover the camera and images from the seller and Gowdy agreed not to press charges.

"I have a lot of colleagues who've lost gear, and it's rare that you find it, especially after a few days," said Gowdy. "It's been a wild ride."

Luckily, he has those precious and historic images for his upcoming book. But the last chapter has yet to be told, with more threats of violence on Inauguration Day.