Biden in Boise: Everything you need to know about the president's visit

We had live coverage of the president's visit as he toured NIFC near the Boise airport. 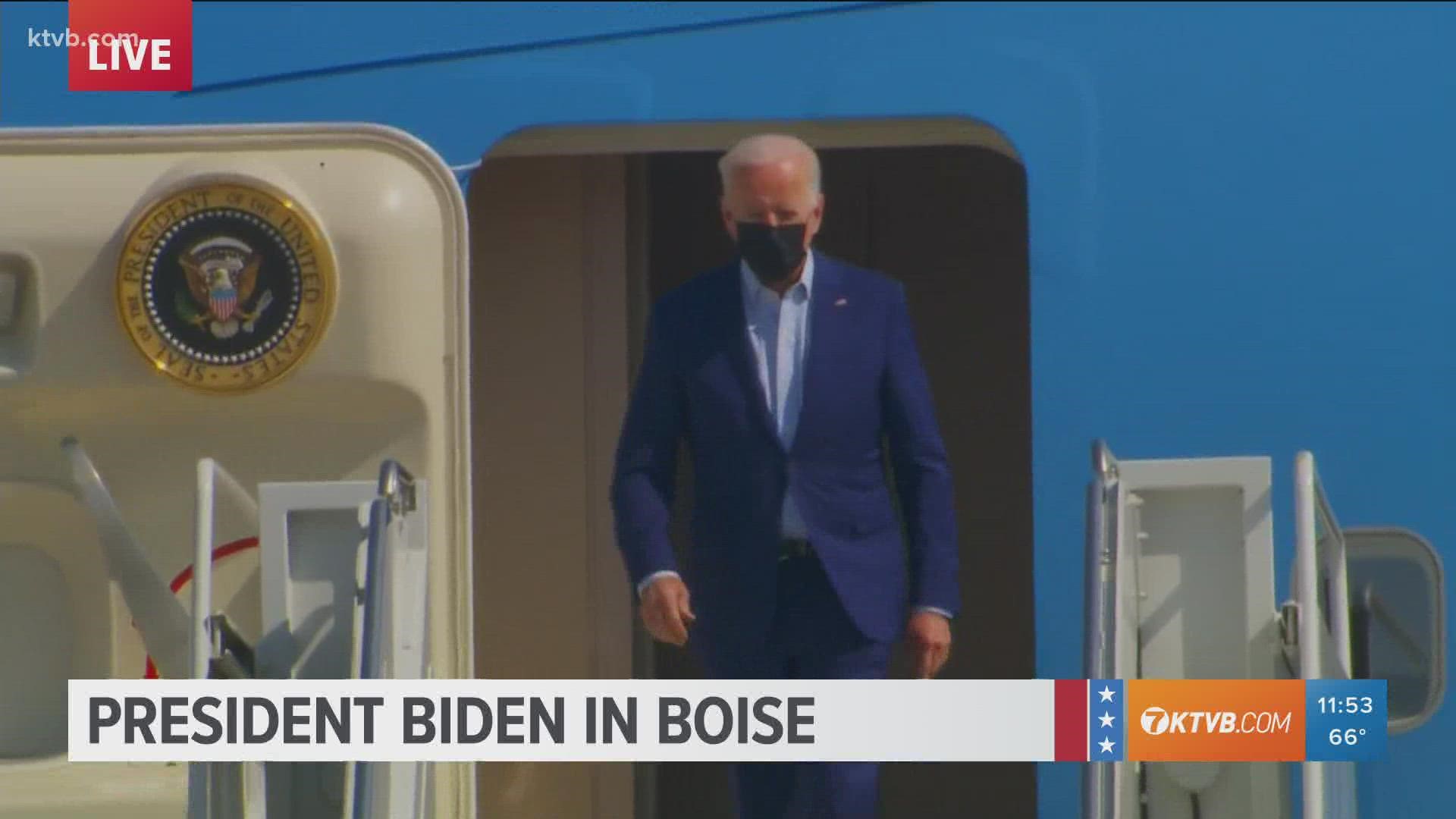 We also covered the hundreds of protesters gathered outside NIFC ahead of Biden's tour of the West Coast wildfire center.

Located on a 55-acre campus near the Boise Airport, NIFC is the nation's support center for wildland firefighting.

The NIFC campus has areas for administrative functions, firefighting equipment storage and refurbishment, retardant tanker operations, and aircraft ramp operations -- such as refueling, loading and unloading, and maintenance. NIFC's Predictive Services Group turns weather reports and fuels data into forecasts for firefighters working on the ground and in the air.

You can read more about NIFC here.

The trip will be Biden's first to Idaho since his election as president. The Boise stop will be part of a tour of three western states, according to the White House.

KTVB will have live coverage of the president's visit to Boise on KTVB.COM, the KTVB YouTube channel and on-air on Idaho's News Channel 7. Ahead of his visit, here is everything you need to know:

Why is Biden coming to Boise?

Idaho is one of a host of Western states hit hard this year by drought and wildfire.

The trip will be Biden's first to Idaho since his election as president. The Boise stop will be part of a tour of the West: After Idaho, the president is set to visit Sacramento, California, to survey wildfire damage and Long Beach, California, to participate in a rally with Gov. Gavin Newsom in opposition of the upcoming California gubernatorial recall election. The White House previously said that Biden would also fly to Denver for a Build Back Better event; that stop appears to have been dropped from the president's public schedule.

Biden previously came to Idaho as vice president in 2009 for the Special Olympics World Winter Games. Former President Barack Obama visited the Gem State twice, once in 2008 and again in 2015, but Biden did not accompany him on those trips.

When is Biden going to arrive in Boise?

According to the White House, Biden is expected to touch down at the Boise Airport at 11:50 a.m. MST on Monday, Sept. 13. After a briefing from state and federal fire agency officials, he will take a tour of NIFC, departing Boise on Air Force One at 1:55 p.m. Monday afternoon.

KTVB will have live coverage of the arrival. To be notified ahead of the landing of Air Force Once, be sure to download the KTVB mobile app.

Watch coverage of his arrival below on our YouTube channel:

Where will Biden go while he is in Boise?

The president is set to visit the National Interagency Fire Center. You can read more about NIFC here.

Who is Biden going to meet with?

Idaho Gov. Brad Little will meet with the president during his Monday visit, according to a spokeswoman for the governor's office. Little will participate in a roundtable discussion at NIFC.

Boise Mayor Lauren McLean also tweeted that she and several members of the city's Youth Climate Action Council will meet with the president Monday as well.

I look forward to sharing with @POTUS our vision for the @CityOfBoise, including our goals within the Climate Action Roadmap.

Will traffic be impacted by Biden's visit?

The president's visit will not be open to the general public. NIFC is located near the Boise Airport, so traffic should not be impacted by his visit.

A Boise Airport spokesman said Monday morning that some flights may be delayed by the arrival and departure of Air Force One. To check your flight status, click here.

To watch the president arrive in Boise live, you can watch on-air on Idaho's News Channel 7. The visit will also be live-streamed on KTVB.COM and the KTVB YouTube channel.