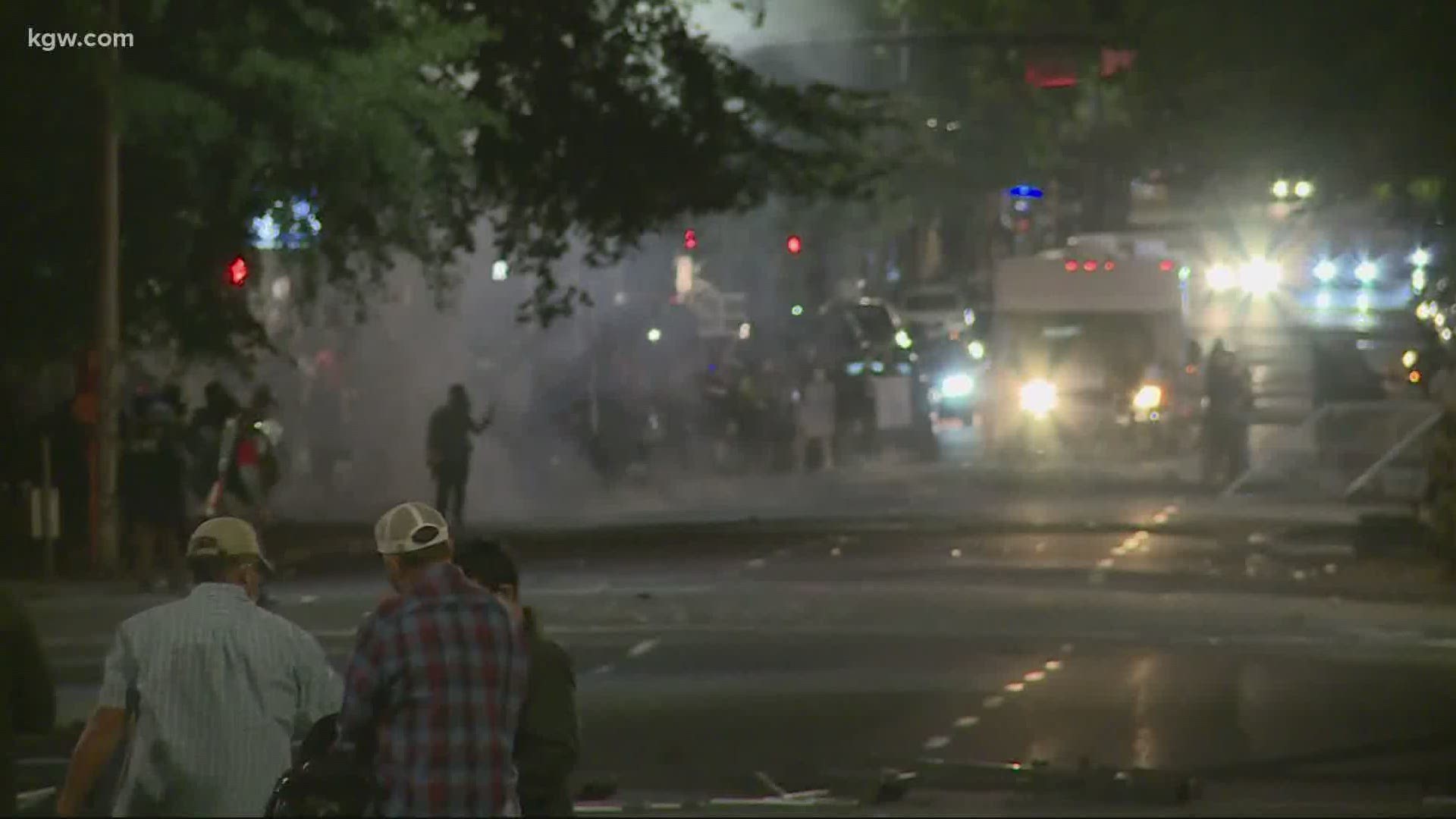 PORTLAND, Ore. — A protest in North Portland was declared a riot after police say protesters broke into the bureau's union headquarters building and set it on fire. The fire was put out minutes later, police said.

The fire at the Portland Police Association building, on North Lombard Street, happened around 10:50 p.m. Police said demonstrators also moved dumpsters onto the street and lit them on fire. Social media reports show police rushed protesters to clear out the crowd.

The demonstration was one of two gatherings Saturday night involving hundreds of people calling for police reform and an end to systemic racism. The other was outside the Multnomah County Justice Center in downtown Portland. The area has been the site of many clashes between protesters and law enforcement over the past seven weeks.

The U.S. Attorney's Office in Oregon on Saturday tweeted a photo showing new fencing around the Justice Center. The agency said the purpose of the fence was to de-escalate tension between protesters and federal law enforcement officers who currently occupy the city.

Protesters responded by dismantling part of the fence. Portland police said protesters used the removed fencing to barricade doors at the Justice Center.

New heavy fencing around federal court house has been removed by protestors pic.twitter.com/guf79KkKvm

Videos on social media show federal officers used tear gas and other crowd control munitions to disperse the protesters outside the Justice Center.

In another element of Saturday night's demonstrations, Portland police said the Federal Protective Service would no longer work in the bureau's incident command center.

based on recent actions by federal law enforcement officers I am not comfortable having them in our space.

The move came after confrontations between police and protesters Friday night. Federal officers were the first to use force and tear gas to disperse protesters, but later in the night Portland police also joined the effort to disperse demonstrators, although the bureau said it did not use tear gas. Portland police said officers intervened because protesters were throwing projectiles, setting off "commercial grade fireworks" and using fencing to block the doors of the Multnomah County Justice Center. Seven people were arrested. One officer suffered minor injuries, police said.

Commissioner Jo Ann Hardesty released a statement Saturday criticizing Mayor Ted Wheeler and Portland Police Bureau for its actions, which came after a candlelight vigil she put together outside the Justice Center in support of protesters' rights to free speech and assembly.

RELATED: Hardesty to Wheeler: 'If you can't control the police, give me the Portland Police Bureau'

Various events took place across Portland on Saturday in support of protesters, the Black Lives Matter movement and efforts to defund and abolish police.

A "Wall of Moms" marched to the Justice Center to create a human barrier between Portland police and protesters.

There were a couple events at Peninsula Park in North Portland, including an Abolish the Police rally, and a gathering of artists to celebrate and elevate the work of Black, Indigenous and people of color.

President Donald Trump also tweeted about the events of Saturday night's protests, saying that the protesters in Portland are "the real deal"

We are trying to help Portland, not hurt it. Their leadership has, for months, lost control of the anarchists and agitators. They are missing in action. We must protect Federal property, AND OUR PEOPLE. These were not merely protesters, these are the real deal!