Spokane area parents opposed to the bill kept their children home from school on Wednesday in what they are calling a "Sex Ed Sit Out." 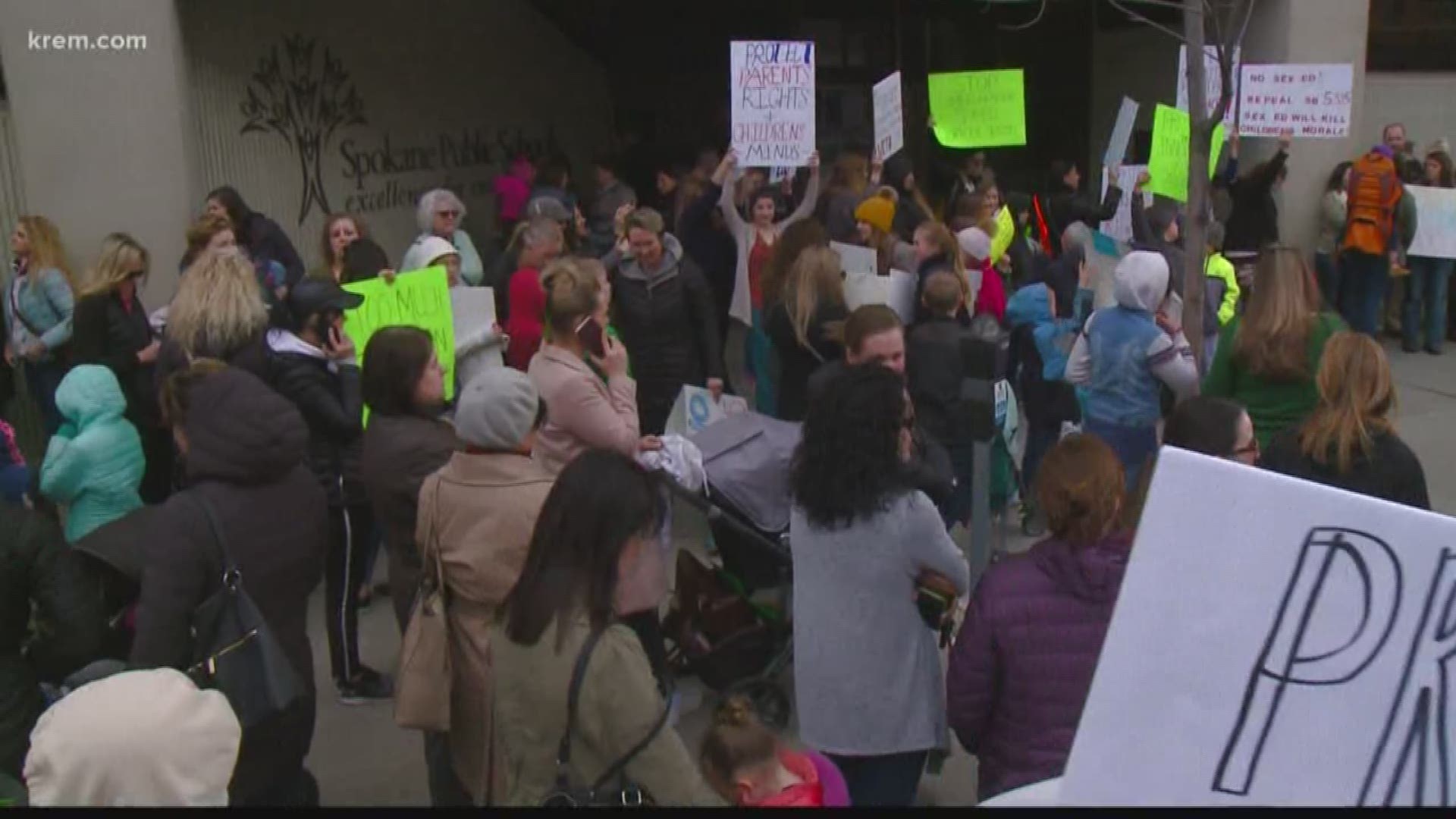 SPOKANE, Wash. — On Wednesday, dozens of parents brought their children to protest a bill that mandates sex education in Washington public schools beginning in kindergarten at the Spokane Public Schools office downtown.

According to the legislation, kindergarteners would be taught the differences between boys’ and girls’ bodies and that there are many ways to express gender.

Several people reached out to KREM on Tuesday voicing their opposition to the bill, adding that parents throughout the area were keeping their kids home from school on Wednesday in what they are calling a “Sex Ed Sit Out.”

Organizers clarified that the protest on Wednesday was directed at lawmakers in Olympia rather than any local teachers or schools.

Spokane Public Schools spokesperson Ally Barrera told KREM that the district is already in compliance with legislation, and many of the processes outlined were based on how Spokane has partners with the community to adapt materials.

Curriculum in kindergarten through third grade classes not changed, Barrera said. Grades four through six are utilizing historic materials this year and will implement new materials next year.

Barrera added that curriculum for middle and high school students was approved last school year and is ready for preview in the district office.

You may have seen graphic cartoon like images from a sex ed program called "3 Rs Curriculum." It's a program that is used by some school districts in Washington. Sponsors of the Bill say the images circulating online are being taken out of context.

"The smart, skilled, and professional  educators determine which lessons or how they might present those lessons and I think what people are seeing in that curriculum are not the pieces that are being taught, said Rep. Monica Stonier, a supporter of the bill.

Each school district will choose which program best suits their needs. 3 Rs is one options, and even then schools can modify it how they see fit.

Protest organizer says conversation should be 'kept at home'

Erin Kranz, a parent of two children who helped organize the protest, said the curriculum goes "far and beyond" what schools should be teaching children.

“I’m passionate about this because this is about parental rights," Kranz said.

Kranz said her children's signs at the protest said "keep my innocence," adding that some children are not mature enough for an earlier sex ed curriculum. Her own sign read, "Protect Parental Rights."

“We want to keep this conversation at home. …They [conversations] should not be done in co-ed classrooms starting at age 5," Kranz said.

A statement from Paul Dillion of Planned Parenthood of Washington and North Idaho said that parents are still allowed to opt their kids out of sex education instruction, and that schools are required to send a note to parents about the instruction a month in advance.

Parents at the protest on Wednesday were chanting a call for Washington Gov. Jay Inslee to veto the bill, a sentiment echoed by the Mead School Board and the Central Valley School Board.

In a post made on the CVSD website on Wednesday, the board asked Inslee to veto the bill so that local districts could maintain control over sex ed curriculum.

"We strongly feel that especially in the area of sexual health education, local control in partnership with our community and parents needs to be retained," the letter reads.

In a letter on Tuesday, the Mead School Board also urged Washington Gov. Jay Inslee to veto the bill as it heads to his desk.

Board President Carmen Green wrote in the letter that the “legislative overreach” takes away local control in a “highly controversial and sensitive area.”

“We understand the need for Human Growth & Development education in our schools. However, we strongly believe local school districts should have majority control when it comes to establishing learning standards in the area of sexual health education,” the letter reads.

More than 2,700 people have joined a Facebook group opposing the bill. Parents from Spokane and Spokane Valley posted in the group on Tuesday that they would keep their children home from various schools, including Lincoln Heights Elementary, Arlington Elementary and Bowdish Middle School.

Parents who kept their children home from school have were encouraged to provide the reasoning for their decision.

Barrera told KREM that Spokane schools did not see any "significant swings in attendance" on Wednesday, adding that parents' requests for absences were on par with what the district saw on Tuesday.

One person who reached out to KREM said those opposed to the bill were also protesting at the Washington state Capitol in Olympia at noon on Wednesday.

The letter from Green adds that the “unfunded mandate” would add strain, forcing the Mead School District in particular to delay purchasing much-needed materials in other areas.

Green said the district is already behind in its seven-year adoption cycle for new instructional materials, citing the McCleary decision as one of the reasons.

Barrera told KREM that the legislation will not put a strain on the Spokane Public Schools budget.