Three of Oregon's electors wore face masks that said "Abolish the Electoral College" to cast their ballots in the 2020 election. 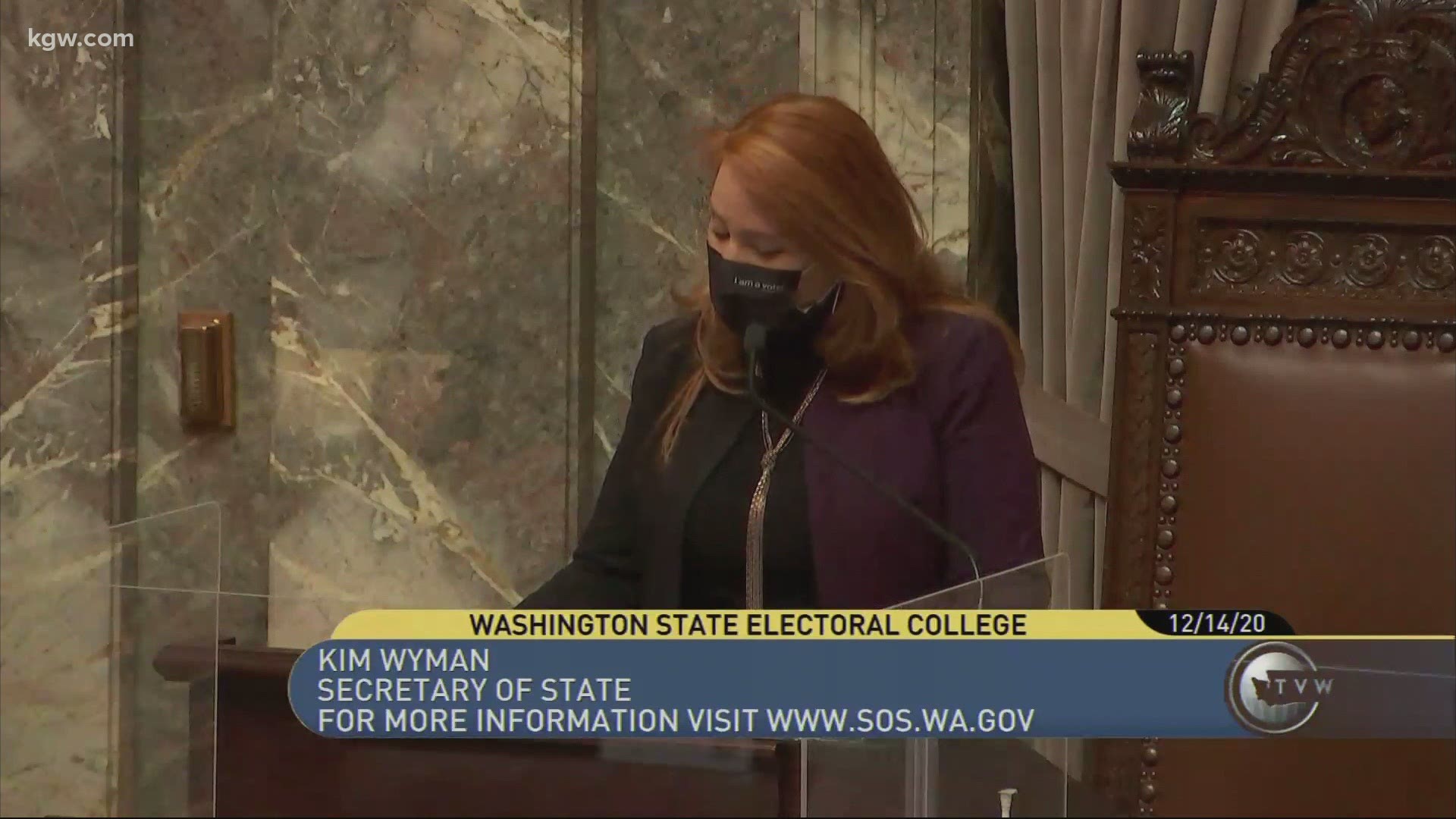 PORTLAND, Ore — On Monday, Oregon’s seven members of the Electoral College gathered in the state capitol to cast their votes for Democrats Joe Biden and Kamala Harris.

Biden won 56% of votes in the state, so Oregon Democrats chose their slate of electors: the chair and vice chair of the Democratic Party of Oregon, along with the chairs of each congressional district.

RELATED: Oregon electors cast their 7 votes for Biden and Harris

“It's just another way to emphasize the importance of ending the Electoral College and moving to a situation where the winner of the national popular vote ends up becoming president of the United States,” Taylor said.

The three electors worked together in the past to advocate for the National Popular Vote Interstate Compact, which Oregon’s legislature joined in 2019. This compact seeks to allocate Electoral College votes to whoever wins the national popular vote for president.

“It puts into place what we really want to see in a representative democracy,” Taylor said.

The compact — largely supported by Democrats — would prevent cases where the president wins the majority of the Electoral College but not the popular vote. Under this system, Hillary Clinton would have won the presidency in 2016 and Al Gore would have won it in 2000.

Supporters say this compact would more equally distribute power between the states and put in place the one person-one vote rule. Opponents of this movement say that the Electoral College preserves federalism and the role of states in presidential elections.

But, this compact will only take effect when enough states have joined to comprise a majority of votes in the Electoral College. So far, it has been enacted by 15 states and the District of Columbia, equaling 196 votes out of the 270 votes needed.

RELATED: These 15 states have joined a pact to get around the Electoral College

According to Associated Press reporting, supporters are trying to surpass the 270-mark by pushing the compact in 2021 in nine states: Arizona, Arkansas, Maine, Michigan, Minnesota, Nevada, North Carolina, Oklahoma and Virginia.

The initiative has been passed by at least one legislative chamber in those states, but may be hard to officially enact due to Republican-controlled legislatures.

Taylor said that, although it may take a while for enough states to join the compact, he still has hope.

“The overall trend in the United States is that it's becoming more progressive as the younger generation moves in,” he said.

Even though he hopes to someday abolish the Electoral College, Taylor said that it was still meaningful to take part in the process, as his great, great grandfather was a drafter of the Oregon constitution.

The elector’s family originally arrived in Oregon in 1845, and he was born and raised in the state.

As Taylor puts it, “I'm a longtime Oregonian with deep roots.”