In the tweet, Inslee's campaign mentioned that the minimum wage in Washington is "higher than any other state" and the "economy is stronger for it." 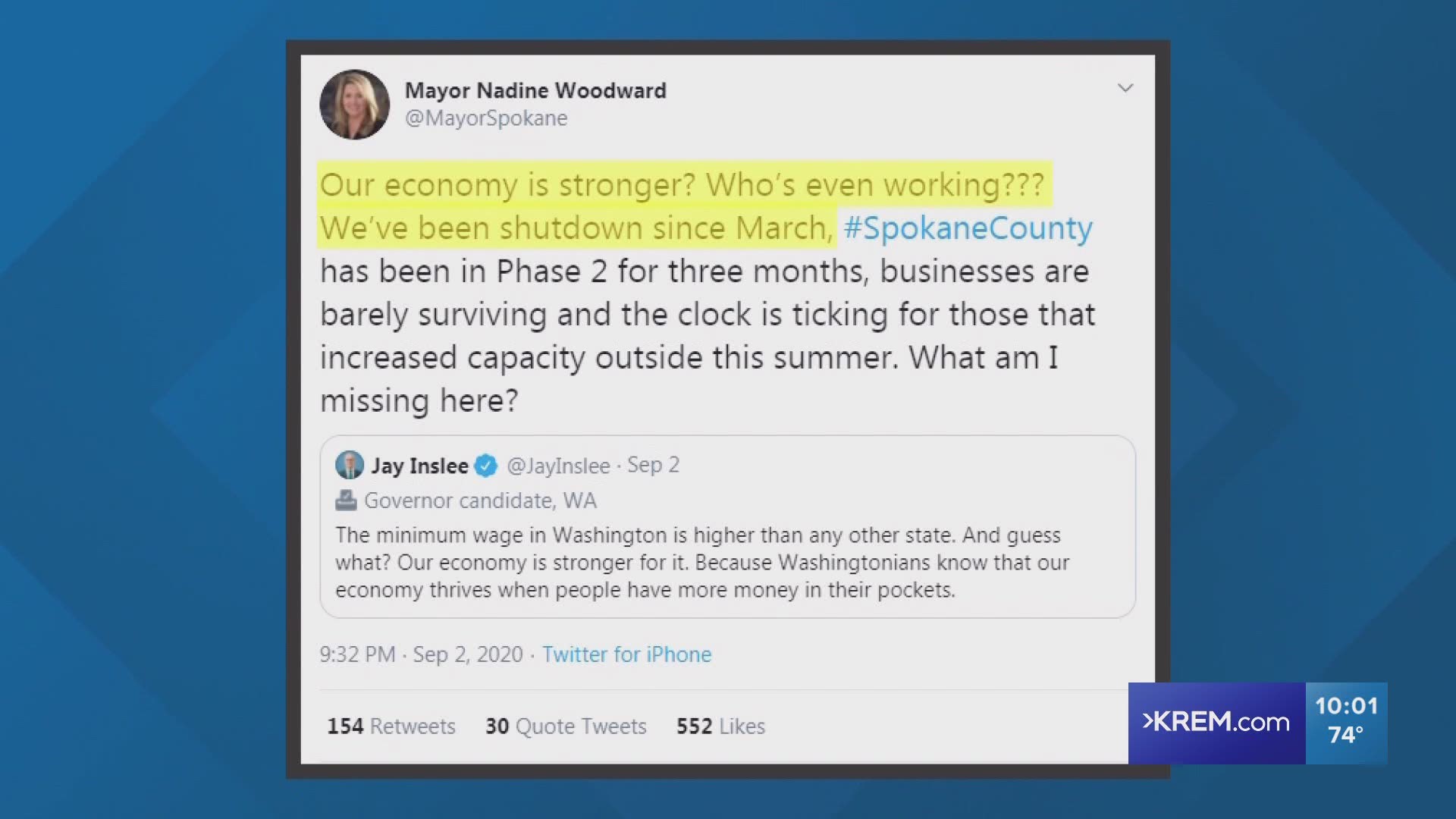 SPOKANE, Wash. — Mayor Nadine Woodward is firing back at Gov. Jay Inslee after a tweet from his campaign commented on the state of Washington's economy.

In the tweet, Inslee's campaign mentioned that the minimum wage in Washington is "higher than any other state" and the "economy is stronger for it."

"Because Washingtonians know that our economy thrives when people have more money in their pockets," the tweet reads.

Woodward appeared to disagree with the governor's message, questioning the strength of the state's economy during a pandemic.

"Who’s even working??? We’ve been shutdown [sic] since March, #SpokaneCounty has been in Phase 2 for three months, businesses are barely surviving and the clock is ticking for those that increased capacity outside this summer," Woodward wrote in a tweet. "What am I missing here?"

Our economy is stronger? Who’s even working??? We’ve been shutdown since March, #SpokaneCounty has been in Phase 2 for three months, businesses are barely surviving and the clock is ticking for those that increased capacity outside this summer. What am I missing here? https://t.co/me6gNSZmZa

"I mean, we're seeing how people are struggling. How families are struggling. And we don't see this robust economy right now, so I just felt that it was important for the governor to know what we're experiencing over here," Woodward said to KREM in an interview.

She pointed out two symptoms of those struggles. First, the city's budget deficit.

"We're still talking about millions of dollars that we're cutting from our budget. And hard choices that we have to make," she said.

Second, how many businesses are asking the city for assistance. Recently, the city was able to offer up a million dollars in loans through CARES Act funding.

"That went live 36 hours ago and we've already had 300 businesses express interest in tapping into those loans," Woodward said.

RELATED: Who will get Spokane's CARES Act funding? 6 organizations could share $2.9M

In her tweet and the interview, Woodward continued pushing Inslee to allow Spokane County to move into Phase 3.

KREM reached out to Gov. Inslee's office for a response to Woodward's tweet. Though the tweet came from his reelection campaign account rather than his official office, spokesperson Tara Lee provided a statement.

"Generally speaking I will say that the governor has done a number of things in this state to help working families such as the minimum wage, paid family and medical leave, pay equity and more," Lee wrote in part. "Obviously more needs to be done to make sure that all families get what they need, but we’ve made clear progress."

Lee also pointed out that Washington was ranked the best state for workers during the COVID-19 pandemic, according to a ranking released on Tuesday, Sept. 2, by Oxfam America.

The organization based its findings on wages, worker protections and workers' rights in all 50 states, Washington, D.C. and Puerto Rico.

Washington scored 76.41 overall, with its highest score in worker protections.

“COVID-19 is not only a health crisis, but an economic one. This has dramatically impacted everyone in our state, businesses and workers alike, particularly those most vulnerable. This crisis has shined a light on the importance of strong worker protections and the far reaching impacts of income inequality," Inslee said in a prepared statement about the rankings.

"We must continue to do whatever we can to ensure that workers and families have what they need. In Washington we believe you can recover a strong economy, without sacrificing the health and safety of workers," the statement continued.

Oxfam also ranked Washington the best state to work in 2018.

Woodward also asked Spokane residents to help the state be able to advance in reopening stages by being careful during the upcoming Labor Day weekend.

"We've seen our coronavirus cases go up during the holiday weekends," she said. "Memorial Day, 4th of July. And I would just ask everybody to go out and enjoy yourself this weekend. Get outside. But please do everything that you can to follow the protocols. Wear your mask, socially distance."