Georgia runoff elections | What you need to know

Here is a guide that will provide you with all the information you need before heading to the polls. 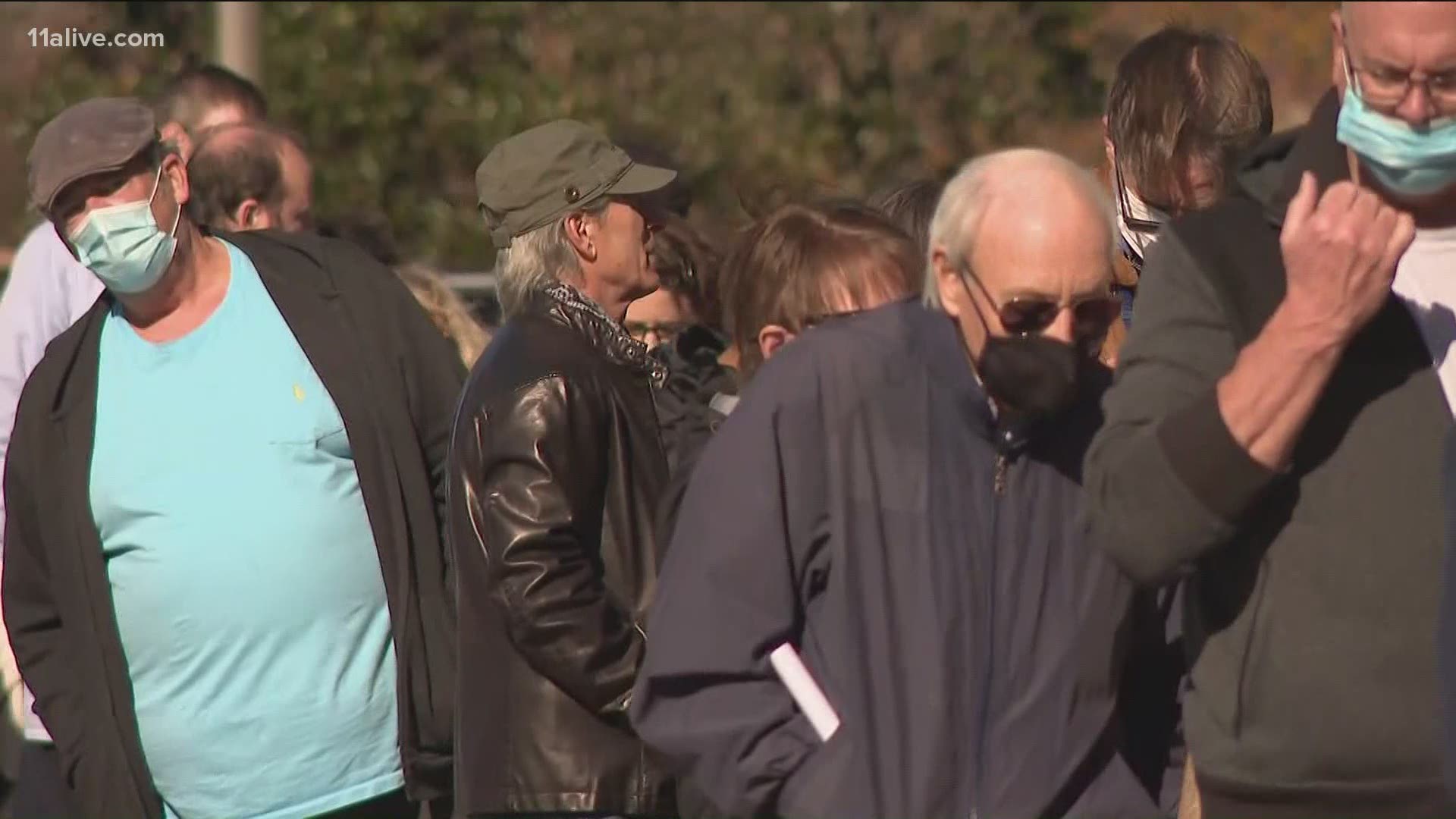 ATLANTA — All eyes are on Georgia as the race for the final two U.S. Senate seats lie in the hands of voters in the Peach State. The races are gaining national attention because if the Republicans want to keep control of the Senate, they must win both seats. If the Democrats win both seats, Vice President-elect Kamala Harris, a Democrat, would be the tie-breaker.

Early in-person voting began on Dec. 14 for the Jan. 5 runoffs.

Here is a guide that will provide you with all the information you need before heading to the polls.

Why is there a runoff?

In Georgia, a candidate must with an election by 50 percent of the ballots cast -- plus one vote. Because that didn't happen on Nov. 3, the top two vote getters are heading to a runoff.

Republican Sen. David Perdue is running against Democrat Jon Ossoff. Perdue has served as the senior United States Senator for Georgia since 2015.

In the other race, Republican Sen. Kelly Loeffler is running against Democrat Raphael Warnock. Loeffler was appointed to the Senate in December 2019 by Gov. Brian Kemp after Republican Senator Johnny Isakson resigned for health reasons.

Who is David Perdue?

Perdue, who just turned 71 on December 10, was born in Macon, Georgia, and grew up in Warner Robins. He earned a degree in industrial engineering and a master’s in operations research from Georgia Tech. Perdue and his wife Bonnie have been married for 46, according to his bio. They have two sons and three grandsons. Prior to becoming a politician, Perdue held several prominent positions as business executive with Reebok, Dollar General and Sara Lee.

Who is Jon Ossoff?

Ossoff, who was born in Atlanta, has never held public office, is described in his website bio as a "media executive, investigative journalist, and small business owner." Since 2013, he has served as CEO of Insight TWI, a media company that says it produces "fresh, daring factual content and high-impact journalism." Ossoff's wife, Alisha, is an OB/GYN physician at a metro Atlanta hospital.

Who is Kelly Loeffler?

Loeffler is a graduate of the University of Illinois at Urbana-Champaign and earned an MBA from DePaul University. Loeffler moved to Georgia in 2002 and worked as chief communications and marketing officer and head of investor relations at Intercontinental Exchange. While at Intercontinental Exchange, Loeffler met her husband, the company's CEO Jeff Sprecher. Loeffler and her husband Sprecher are reportedly worth more than $500 million, making her the richest member of the Senate. Loeffler is also co-owner of the WNBA's Atlanta Dream.

Who is Raphael Warnock?

Warnock is pastor of the historic Ebenezer Baptist Church in Atlanta, the church whose pulpit was once held by Martin Luther King, Sr. and co-pastored by Dr. Martin Luther King, Jr. Warnock grew up in Savannah, Georgia, with 11 siblings. Warnock graduated from Morehouse College in Atlanta with a degree in psychology in 1991 and went on to earn a Master of Divinity degree from Union Theological Seminary in New York City.

Can I vote in this election?

Any registered voter can vote in the Senate runoffs -- regardless if you voted in the initial race on Nov. 3. You don't have to live in a specific district to vote in this race, as it is a statewide election.

Where can I vote early?

There are many locations across the state where you can vote early. You can vote at any of these locations, however, you MUST vote in the county where you are registered. For a list of early voting locations in the metro area, click here.

Are the lines long for early voting?

You may recall many long lines for the General Election in November, as well as for the primaries. On the first day, Dec. 14, some lines were reported to be very long. Some metro counties, including Cobb, DeKalb, Fulton and Gwinnett make it easy for voters to check wait times before heading to the polls. Find that information here.

When does early voting end?

Early voting will end on Dec. 29, 30 or 31st, depending on the county you are registered in. The legislature spells out the early-voting period, however, counties have the ability to observe holidays. Some county governments have set Dec. 30 and 31 as holidays.

What about absentee voting?

Any registered voter in Georgia can request an absentee ballot at ballotrequest.sos.ga.gov, which allows access for you to apply, without having to mail in a paper application. You can also return your application via mail, fax, as an email attachment, or in-person to your local county Board of Registrar's Office. While there is no set deadline, remember, it takes time to process your application and you want to do it sooner than later -- so that you have time to return it. Click here for more information about applying for a ballot.

If I don't want to mail by absentee ballot, can I drop it off somewhere?

Whether you mail it or drop it off, ballots must be in the hands of election officials by 7 p.m. on January 5. Most counties in Georgia have official ballot drop box locations that are convenient for voters to use. The locations are secured and emptied on a regular basis. For drop box locations in the metro, click here, or visit your county's elections website.

If I wait until Jan. 5 to vote, where is my polling site?

As we said above, you must go to your designated polling location if you decide to vote in person on Election Day between 7 a.m. and 7 p.m. To find this information, visit the My Voter Page -- found at mvp.sos.ga.gov. Simply enter their first initial, last name, county of residence, and date of birth, then click "submit."  Here you will find the exact name and address of your precinct.

What do I need to bring with me to vote?

You will need to show a photo ID to vote in Georgia. Acceptable forms include any valid state or federal government-issued photo ID, including a free ID card issued by your county registrar's office or the Georgia Department of Driver Services (DDS); Georgia driver's license, even if expired; valid employee photo ID from any branch, department, agency, or entity of the US Government, Georgia, or any county, municipality, board, authority or other entity of this state; valid US passport ID; valid US military photo ID; student photo ID card issued by a Georgia public college, university, or technical school; or a valid tribal photo ID.

What if I'm unable to provide ID?

If you are unable to provide ID, you will be able to vote a provisional ballot. If you are a first-time voter, you will need to provide a copy of your ID within three days after the election to your County Board of Elections and Registration. As long as you do so, your provisional ballot will be counted, as long as you are otherwise eligible to vote.

Is there a dress code at polling locations?

There are rules on the books about what you can and can not wear to vote in Georgia. The Secretary of State's Office says if you wear anything that promotes a candidate on the ballot, you won't be allowed in the polling place. For information on that, check our VERIFY report here.

When will we get results?

Results will likely come in the night of the election. With all eyes on Georgia, counties will be pressured to work quickly. We should have them by midnight. You can find the results live on 11Alive.com.

Where can I learn more about the races, candidates and voting?

Visit the 11Alive news app or 11Alive.com for continuing coverage leading up to the Jan. 5 runoffs. Our election page is also a great resource, here.