What is the 'proposed constitutional amendment' on Washington ballots?

Engrossed Senate Joint Resolution No. 8212 deals with how the state can invest certain public funds. 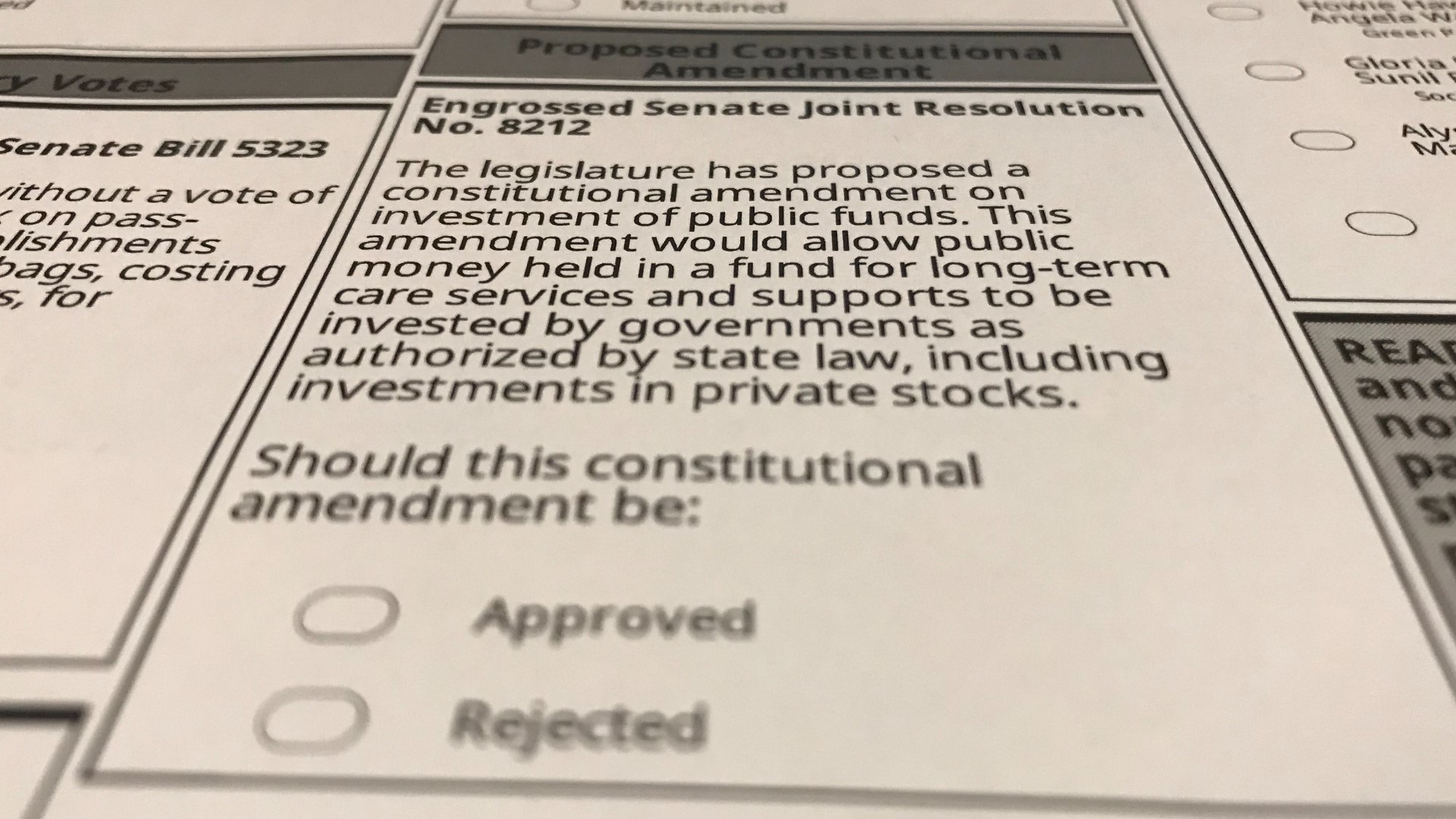 SPOKANE, Wash — Washington voters have started getting their ballots. Along with candidates, advisory votes, and a major referendum, they'll find Engrossed Senate Joint Resolution No. 8212.

The measure deals with something called the Long Term Care Trust. That's a fund created by state lawmakers last year.

Paid for by a payroll tax bump, it will allow certain people who need help with day-to-day activities to collect cash from the state to pay for that help. With some exceptions, taxpayers must have contributed to the fund for ten years before they can qualify. They can get up to $100 per day until they max out at $36,500.

The cash could go towards anything from nursing homes to wheelchair ramps to transportation to and from doctors' appointments.

This year, lawmakers were looking for a way to grow the fund without increasing taxes further. One way to grow funds is, naturally, investing the money that's already in them into stocks.

The state constitution explicitly states that public funds cannot be used to buy private stocks. Money can be invested in other ways, like treasury bonds, but the return on those investments is relatively small.

"Our long term average that we are going to shoot for is seven and a half percent," said Sen. Mark Schoesler (R-Ritzville), the Senate Republican Leader and one of the sponsors of the measure. "There are no seven and half percent returns out there for the fund otherwise."

So the legislature overwhelmingly passed a resolution to amend the constitution and allow money from this specific fund to be invested in stocks. Only four lawmakers between the house and senate combined voted against.

Now the people of Washington have to sign off on it.

This isn't the first time such an amendment has been proposed. Several other funds – like pensions – have already been listed as exceptions to the no-stocks rule. This measure basically would just add another fund to the list.

And there's another reason some lawmakers want to put this money into stocks. They say it would make it harder for the fund to be raided if legislative priorities change later.

"People don't have a lot of confidence that government will use money as it's intended," said Schoesler. "By investing [via] the state investment board, it can't be swept away to pay for general government."

But although the amendment was popular in Olympia, the vote wasn't unanimous. Some like Sen. Mike Padden (R-Spokane) said putting money into stocks is too risky, that public money should stay only in safer investments.

Still, supporters of the measure say the Washington State Investment Board, the agency that would decide exactly where the money goes, knows what it's doing.

"They have a very good track record of investing," said Schoesler. "In fact my broker once told me he'd rather they'd manage his wife's pension than he did."

For the amendment to become law, it needs just a simple majority of votes in the general election.