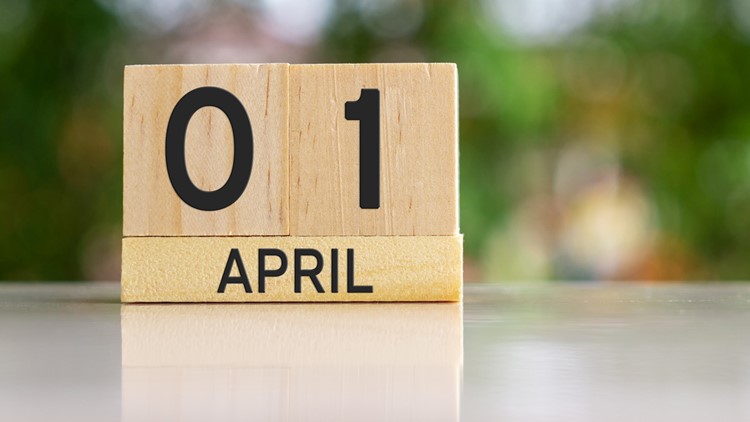 Former President Abraham Lincoln once famously said, "Don't believe everything you read on the internet."

Lucky for you, the Verify team is here to help prevent you from feeling gullible on April Fools' Day.

Here is a running list of what's real and what's fake from national brands and notable names on April Fools' Day.

Play the classic game "Snake" while taking a tour of some of the world's biggest cities.

VERIFIED: Yes, Google updated Maps to feature "Snake" in eight cities and a world map. You can still use the regular Google Maps.

Google is known for its April Fools' Day pranks. In 2018, the internet giant launched "Where's Waldo?" in Google Maps and also offered to help users clear up storage space by deleting bad jokes on their devices.

The Cheesecake Factory to give away free food

Nintendo turned Kirby into a cube

FALSE: While Nintendo did post their iconic character “Kirby” shaped like a cube, the real character is not changing.

Since its introduction in 1992, Kirby has been a small, pink, “globe” shaped character. A look at the normal, non-April Fool’s day Kirby can be found on the Nintendo of America page.

Timex discovered the "25th hour" in the day

FALSE: Timex made an April Fools' day post about discovering the “25th hour.” Described on their site as a groundbreaking discovery, the announcement is accompanied by a men’s and women’s watch featuring a 25th hour on the watch face.

“This started way back with Leonardo Da Vinci,” the page read. “The 25th hour was right there. Staring us in the face. For centuries.”

Despite the entertaining post, we can Verify this claim is false. Unless the Earth’s rotation also changed overnight, there are still only 24 hours in one day.

Spaghetti Farmer in the UK

FALSE: The BBC shared an April Fools' prank from more than 60 years ago on their Twitter account in honor of April 1. The video, which originally aired in 1957, documents the story of spaghetti farmers. The old black and white video is no more real now than it was back then.

FALSE: Starbucks took to Twitter to announce a new chain of stores for dogs called "Pupbucks." The announcement video proclaims they seek to brighten the days of peoples' dogs -- and offer the hounds free WiFi.

FALSE: While Ben & Jerry’s do offer ways to get their ice cream delivered to you, drones are not currently on the list.

The April Fools' day video shows a drone carrying an ice-cream package to a consumer, but ends with “we still have more testing to do.”

But, it’s not real. While it would be entertaining to see a friend who’s a little too friendly with your liquor supply get a well-deserved glitter shower, the page to buy the product on Jameson’s site says the product is sold out.

LEGO
The long search is finally over... 📱

FALSE: Anyone who has hunted through a pile of Lego's knows the pain of trying to find that one last critical piece. But unfortunately, the app that would solve that is just an April Fools' joke.

LEGO posted it early April 1st with the caption: “The long search is finally over…” and an image of a brick finding app.

Unfortunately, as the “coming soon” at the bottom indicates, this is not a current app.

A Google blog post stated Google Home can now communicate with tulips, thanks to advancements in artificial intelligence.

This gives the tulips the ability to tell the plant owner when they need water, light or more space. According to Google, tulips are also great listeners and give sound advice.

Or at least they would if it wasn’t an April Fools' joke. Google Tulip is only available on Google Home devices on April 1, 2019. You can use it for the day by telling your Home, “Hey Google, talk to my tulip.”

While this is an April Fools' day joke, McDonald’s has actually made sauce-based decisions from fan input in the past. In 2018, they brought back the “szechuan” sauce that was highlighted in a sci-fi comedy cartoon, “Rick and Morty.”

So even though this isn’t real, maybe enough social media excitement could make them consider it?

FALSE: Unfortunately for anyone looking to "build-a-bae" this April Fools' Day, the company's website admits that “Build-A-Bae isn’t real.”

They admit they’re not creating a dating app, but do believe in “bringing more heart to life.” What is real is the 25% off coupon they’re offering today only on their site.

FALSE: Disney posted a video to Twitter announcing their new “snears” or snack ears, that allow park-goers to carry their favorite foods around in the iconic mouse ears.

While the images of turkey legs and popcorn as headwear are entertaining, the concept is definitely an April Fool’s day joke.

FALSE: There will not be puppies running across the court chasing tennis balls in the next US Open.

The US Open Twitter account posted that puppies will join the ballperson team for the US Open for the first time in 2019.

While that would be cute and would create quite a spectacle and several match delays, it is just an April Fools joke.

Just to be safe, a reverse image search of the photo they tweeted out does not return any matching results. The puppy in the picture is probably photoshopped in.

FALSE: Honda’s video on April Fools' day promised a new “pastport” trim for their new passport model. It’s a “90’s-themed trim...amplified with everything you love about the ‘90s on the inside.”

The video shows a beeper holder, coins slots and a cassette player in the old-fashioned car. Nostalgia kick? Absolutely. Real? Absolutely not.

The ad says to check out their site for more info. If you follow the link, you get taken to Honda’s current automobile page. No info about a “pastport.”

“I'm retiring. In my spare time, I'll be tweeting #LFG”

Before Patriots fans suffer from a heart attack and fans of all other teams rejoice, they should consider the context of the tweet.

It's April Fools' Day. It’s a suspicious date for a retirement announcement without some kind of press conference or news release.

It is extremely unlikely the greatest player in Patriots' history would announce his retirement without coordination with the team. If he was actually retiring, the Patriots would be announcing it themselves with their own tweet, a news post, coordination with NFL social media, a press conference and probably a lot more.

And to fully confirm that the G.O.A.T. is not actually retiring, he has since tweeted, “Is this a bad joke?”

FALSE: Duolingo is a free language learning app that sends you daily reminders to take your language lessons, often multiple times a day.

In fact, Duolingo is so well-known for its constant reminders that it has become the topic of internet memes. Most jokes are about the app’s mascot -- a green owl -- aggressively telling you or even threatening you to learn a language.

Duolingo itself is now in on the joke with their April Fools' joke: Duolingo Push.

According to their announcement video, Duolingo Push will send their mascot, Duo, to personally remind you to take your daily language lessons. He can do so by being encouraging, disappointed or even passive-aggressive.

The page on their website for the feature even warns users, “Ignore at your own risk.”

Fortunately, it’s just an April Fools' joke. While there are price plans for Duolingo Push, they all link back to Duolingo’s homepage.

We'll continue to update this list throughout April Fools' Day.