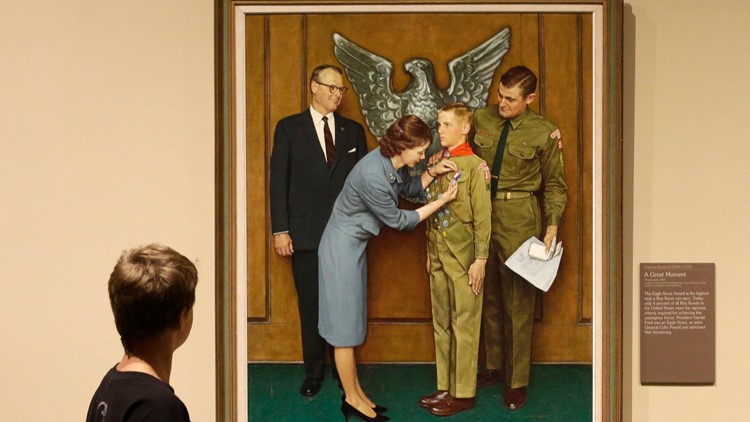 Photo by: AP
FILE - In this July 22, 2013, file photo, a youth looks over the Norman Rockwell exhibition in Salt Lake City, featuring his Boy Scout-themed paintings. A team of lawyers filed a lawsuit Monday, Jan. 6, 2020, in federal court in Washington, D.C., seeking to establish the nation’s capital as a venue for men across the U.S. to sue the Boy Scouts of America for allegedly failing to protect them from long-ago sexual abuse at the hands of scoutmasters and other leaders. (AP Photo/Rick Bowmer, File)

Unique sex-abuse suit filed against Boy Scouts in US capital

The lawsuit seeks to allow men across the U.S. to sue the Scouts in Washington, even though they live in states where the statute of limitations has passed.
Author: Suzanne Nuyen (TEGNA), TEGNA, David Crary (Associated Press)
Published: 5:34 AM PST January 7, 2020
Updated: 6:08 AM PST January 7, 2020

A potentially ground-breaking lawsuit is being filed in federal court in Washington, D.C., against the Boy Scouts of America. It seeks to establish Washington as a venue for men across the U.S. to sue the Scouts for allegedly failing to protect them from long-ago sexual abuse by scout leaders.

The eight plaintiffs, identified by the Associated Press as John Does 1 through 8, live in states where statute of limitations laws would prevent them from suing the BSA based on claims of long-ago abuse. The law in Washington accommodates some suits of that type. The plaintiffs live in eight different states: Arkansas, Arizona, Florida, Hawaii, Kentucky, Utah, Virginia and West Virginia.

The plaintiffs’ lawyers say Washington is an appropriate venue because the Boy Scouts were incorporated there and have a congressional charter.

“We believe victims, we support them, we pay for counseling by a provider of their choice and we encourage them to come forward,” the BSA said in an email to the Associated Press.

The lawsuit is headed by the Zuckerman Spaeder firm in Washington. According to the Associated Press the lawsuit says the Boy Scouts of America have known since its early days that the program attracted pedophiles but avoided public acknowledgment of the issue. The lawsuit contends BSA even kept secret files of men known or suspected of committing sex abuse.

"Never once in 103 years of reporting to Congress has BSA disclosed the fact that its programs were, and are, magnets to tens of thousands of pedophiles,” the lawsuit says, according to the Associated Press. “Instead, BSA’s Reports to the Nation have miscast the organization as a bastion of moral authority.”

One of the plaintiffs identified himself to the the Associated Press as 39-year-old Navy officer Dave Henson. Henson, who is from Hawaii, said he was abused by an assistant scout leader in Lake Dallas, TX. He said the abuse started in 1991 when he was 11 and continued for five years.

“The abuse occurs once you’re isolated from the rest of the group, and you stay in that isolation for years,” he told the Associated Press.

The BSA says it can't comment on pending litigation.