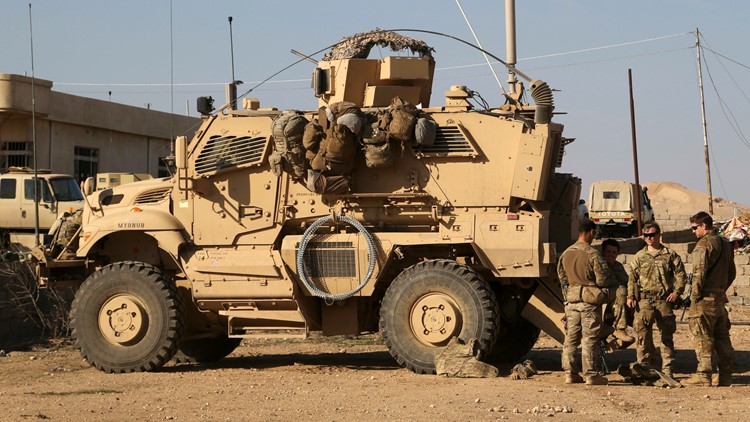 Photo by: AP
FILE - In this Feb. 23, 2017 photo, U.S. Army soldiers stand outside their armored vehicle on a joint base with Iraqi army south of Mosul, Iraq.

No coalition troops hurt in rocket attack at Iraq base

None of the U.S.-led coalition was injured in the rocket fire that appears to have originated in Mosul, where the forces are helping battle Islamic State remnants.
Author: QASSIM ABDUL-ZAHRA Associated Press
Published: 11:53 AM PST November 8, 2019
Updated: 6:43 PM PST November 8, 2019

BAGHDAD, Iraq — A barrage of Katyusha rockets targeted an Iraqi air base that houses American troops south of the city of Mosul on Friday, officials said. No members of the U.S.-led coalition were injured.

The rocket fire appears to have originated in Mosul and struck the Iraqi army base in Qayyara, about 60 kilometers (38 miles) south of Mosul, where coalition forces are helping the Iraqis battle remnants of the Islamic State group, Iraqi security officials said. They spoke to The Associated Press did so on condition of anonymity under regulations.

There was no immediate claim of responsibility nor was it clear if any of the rockets struck the base.

Iraqi officials did not immediately say whether there were any casualties, though a coalition spokeswoman later said no coalition troops had been injured.

"Coalition forces are in Iraq at the invitation of the Government of Iraq to defeat ISIS remnants," U.S. Marine Corps Capt. Marisa Roberts said, using a popular acronym for the Islamic State group. "We will not be deterred by these attacks and maintain the right to defend ourselves."

Iraq announced victory over IS two years ago, but the extremist group is still active through sleeper cells and frequently mount attacks on Iraqi security forces.

RELATED: Supreme leader: Iran has outflanked US since 1979 revolution

Some hard-line Iraqi militias loyal to Iran have recently threatened to carry out attacks against Americans in the country. The U.S. maintains about 5,000 troops in Iraq.

American forces withdrew from Iraq in 2011 but returned in 2014 at the invitation of the government to help battle IS after it seized vast areas in the north and west of the country, including Iraq's second largest city, Mosul. A U.S.-led coalition provided crucial air support as Iraqi forces regrouped and drove IS out in a costly three-year campaign.

The attack on Friday came as large parts of Iraq, including the capital of Baghdad and Shiite-majority southern provinces, are engulfed in anti-government protests. Rockets have been fired near the U.S. Embassy in the heavily fortified Green Zone in the Iraqi capital on several occasions recently.

Mosul, which was largely destroyed during the war against the Islamic State group, lies north of Baghdad and has not seen any anti-government protests.