Jennifer Dulos disappeared in May amid contentious child custody proceedings with her estranged husband. He's now been charged with her murder.

Connecticut State Police announced Tuesday afternoon that three people have been charged in connection to the missing person case of Jennifer Dulos.

Jennifer Dulos, a mother a five, disappeared in May 2019 amid contentious child custody proceedings with her estranged husband, Fotis Dulos.

Police said Fotis Dulos has been charged with felony murder, murder, and kidnapping. He faces a court-set bond of $6 million. He was booked at the state police barracks in Bridgeport and is expected to be held overnight

Dulos is being held on a $6 million bond.

Fotis Dulos' lawyer, Norm Pattis, said he does not believe prosecutors can make the charges stick. Pattis said he hopes that Dulos will make bond and reported that his client is "somber" following the arrest.

Credit: AP
Connecticut State Police officers lead Fotis Dulos, center, from the State Police barracks to a waiting car Tuesday, Jan. 7, 2020, in Bridgeport, Conn., after he was arrested at his home in Farmington. He faces charges he murdered his estranged wife Jennifer Dulos, who went missing in May 2019. (AP Photo/Chris Ehrmann)

A statement released by close friend Carrie Luft, on behalf of the family and friends of Jennifer Farber-Dulos, thanked police for their painstaking work that led to these arrests.

"Although we are relieved that the wait for these charges is over, for us there is no sense of closure. Nothing can bring Jennifer back. We miss her every day and will forever mourn her loss. We believe the arrest warrants will speak for themselves, and we ask that you please respect our privacy during this time. Thank you," the statement read.

Fotis Dulos and his girlfriend were previously charged with evidence tampering and hindering prosecution in connection with Jennifer Dulos' disappearance. They pleaded not guilty and posted $500,000 bail. Police alleged Fotis Dulos and Troconis went to Hartford to dispose of garbage bags containing items with Jennifer's blood on them. 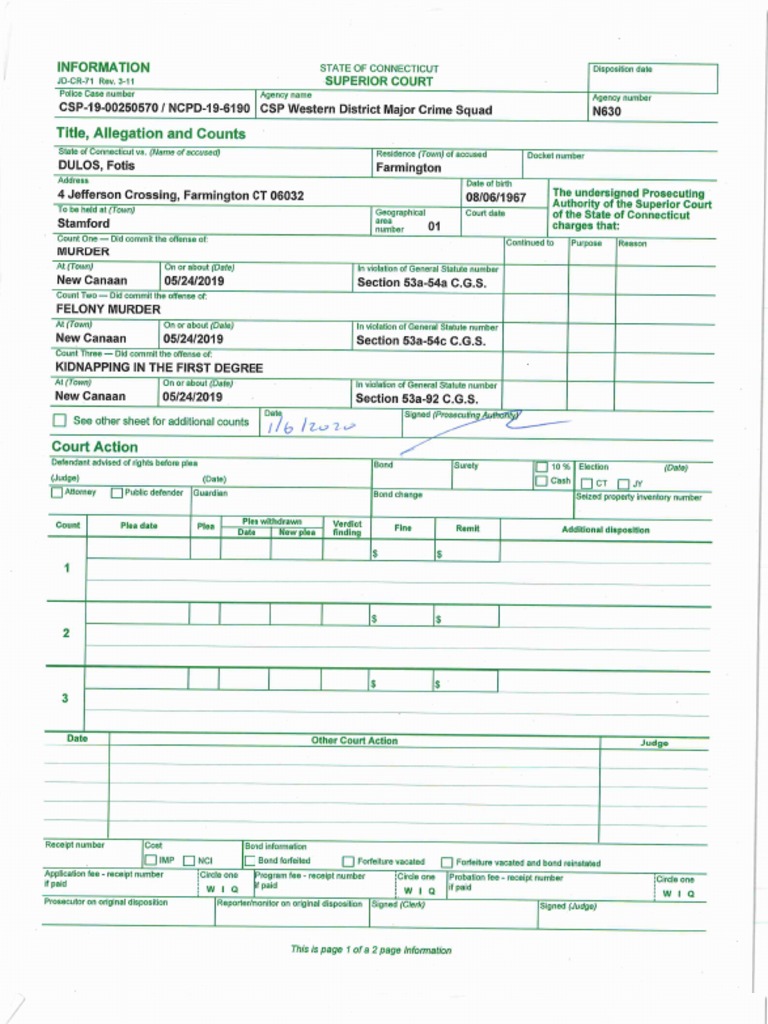