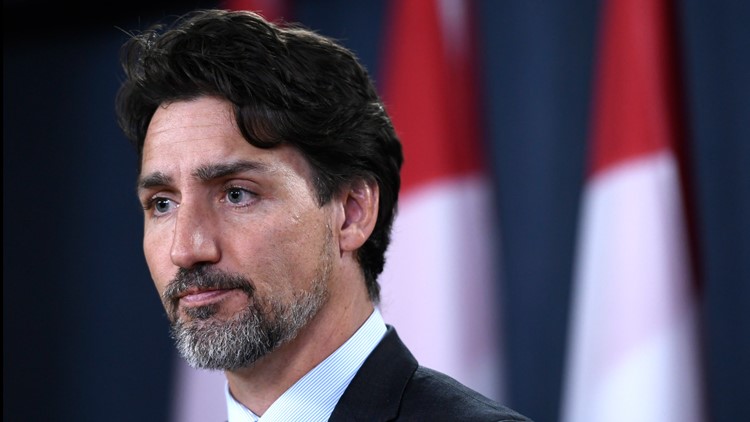 Photo by: AP
Prime Minister Justin Trudeau speaks during a press conference in Ottawa on Saturday, Jan. 11, 2020. Trudeau says Iran must take full responsibility for mistakenly shooting down a Ukrainian jetliner, killing all 176 civilians on board. (Justin Tang/The Canadian Press via AP)

WASHINGTON — Canadian Prime Minister Justin Trudeau says the victims of the Ukrainian jetliner shot down by a missile that killed 176 people including 57 Canadians would be alive right now if tensions had not escalated in the region.

Trudeau has been careful to avoid blaming U.S. President Donald Trump for the deaths of the passengers after Trump ordered the killing of Gen. Qassem Soleimani, Iran's top general, in a U.S. airstrike in Baghdad.

Some Canadians including a leading corporate leader in the country blame Trump, in part, for the deaths. Trudeau has spoken to Trump.

As the Associated Press reports, Trudeau said in an interview with Global News Television, “If there was no escalation recently in the region, those Canadians would be right now home with their families. This is something that happens when you have conflict and war. Innocents bear the brunt of it.”

Monday, Canada's Transportation Safety Board said they have been invited by Iranian authorities to analyze voice and flight data recorders from the doomed jetliner. TSB Chair Kathy Fox said, “We are working very hard to build trust daily in order for us to be brought in,” adding that “Canada’s role is evolving. It remains to be seen how far that will go.”

Canada's Transportation Safety chair Kathy Fox holds up a document as she speaks about the Iran plane crash during a news conference in Ottawa, Monday, January 13, 2020 (Adrian Wyld/The Canadian Press via AP)
AP

RELATED: 4 Iraqi servicemen wounded in rocket attack on air base

Director of investigations, Natacha Van Themsche said Canadian investigators have been invited to inspect the crash site, with two investigators already having obtained visas to enter Iran, the Associated Press reported. The agency will also try and find out why Iranian airspace was not closed to civilian traffic during one of the highest moments of the latest tensions between the U.S. and Iran, when Iran launched attacks against airbases in Iraq that housed U.S. troops and personnel.