'Year of the Woman'? Not for Republican women in the House, where their ranks have plunged to a 25-year low

WASHINGTON – Days after House Republicans lost their majority and gathered to choose new leaders from their shrunken ranks, New York Rep. Elise Stefanik stood up at the closed-door meeting and asked her colleagues to look around.

“This is not reflective of the American public,” Stefanik said of the overwhelmingly white group of new and returning lawmakers that included only 13 women. “We need to do better.”

Likewise, Indiana Rep. Susan Brooks, the outgoing co-chair of the bipartisan Congressional Caucus for Women’s Issues, said she is in mourning for her defeated female colleagues. The Republican who was supposed to succeed Brooks as caucus co-chair – California Rep. Mimi Walters – was among the November casualties.

{Nov. 30, 2018} {10:30 a.m.} -- Washington, DC -- Rep. Elect Carol Miller of West Virginia takes notes ahead of the lottery that will determine the order in which new members of Congress will select their offices. -- Photo by Hannah Gaber, USA TODAY Staff
Hannah Gaber, USAT

“Everyone is struggling right now for answers,” she said. “Fifty-two Republican women ran for Congress … and only 13 of us made it across the finish line.”

That will be the lowest number of Republican women in the House in a quarter-century.

By contrast, voters elected a record 89 Democratic women to the House. Republicans have never had more than 25 women, a record set in 2006.

There will be only one Republican woman in the freshman class: Carol Miller of West Virginia.

(In the Senate, Republicans expanded their number of women by one to seven. The number of Democratic female senators will remain the same at 17.)

Though there’s been much attention on this election’s “Year of the Woman,” which sent a record number of women to Congress and to state legislatures nationwide, there’s been less focus on the diminished ranks of Republican women.

Some narrowly lost and would have done better in a year when all Republicans weren’t facing headwinds.

But even in good years for the GOP, such as when it took over the House in 2010, Republican women have not expanded their ranks the way Democrats have.

'You need to be more proactive'

Experts said Republicans don’t have the same support for women that Democrats do to help recruit candidates, raise campaign funds and win primaries. That’s hard to do, said Idaho State University assistant professor Malliga Och, when the party tends to be dismissive of “identity politics” as something that lowers the quality of candidates.

“You cannot just say, 'Oh, women should be there,' and wait for the women to come,” said Och, who studies women in politics. “You need to be more proactive.”

As more women identify with the Democratic Party – as shown by the 19-percentage-point gender gap in votes for House candidates – the pool of potential Republican candidates shrinks.

“We have especially failed to bring our message to, and connect with, women and racial minorities,” Utah Rep. Mia Love, the only black Republican woman in Congress and one of the five female House incumbents defeated in November, wrote in an opinion piece published Wednesday.

“For the party, the optics of it are terrible,” said Debbie Walsh, director of the Center for American Women and Politics at Rutgers University.

How the parties diverged

The parties’ paths started diverging in 1992, the last “Year of the Woman.”

In the 1980s, Republican women in Congress made up a slightly greater share of their caucus than Democratic women did in theirs – though the numbers on both sides were small.

In the 1990s, Democrats began significantly expanding the share of women in their caucus with help from groups such as EMILY’s List, which raises money for female Democrats who support abortion rights.

Republican women found it harder to win primaries as the party became more conservative on abortion and other issues, Walsh said.

“In general, the party shifted to the right,” she said. “The resources for Republican women weren’t there. They were only building on the Democratic side.”

Brooks, who was first elected in 2012, said Republican women don’t have the national fundraising network or as many donors who will contribute the maximum.

“I’ve been saying this ever since I’ve been here,” she said, “The women in the Republican Party have not been supported financially and have not had the fundraising success that many of our male counterparts have.”

Republicans have made periodic attempts to address such issues.

“Every cycle, there’s one or two PACs that come up that want to elect more Republican women,” Och said. “And in a cycle or two, they disappear.”

Stefanik, the first woman to lead recruitment efforts for the campaign arm of House Republicans, took the job in 2017 to focus on finding more women and nontraditional candidates for this year’s election.

Although 120 Republican women filed to run, 52 were nominated – one short of the GOP record set in 2004. While more than 43 percent of the Democrats’ House candidates were women, only 13 percent of Republicans were.

Republican women who won their party's nomination didn't do as well as their male counterparts in the general election.

Stefanik felt restricted by the party’s policy of not getting involved in primaries, which she said impedes efforts to nominate more women. Now that her leadership role with the National Republican Congressional Campaign is over, Stefanik plans to focus her own political action committee on giving early support to female candidates.

“The party needs to have a wake-up call,” she said.

Rep. Tom Emmer, R-Minn., who is taking the reins of the NRCC, said it’s wrong to have anyone other than primary voters decide who is the best candidate.

“We do need to emphasize that we’re looking for more women. There’s no question we need to ask that. But just because of your gender does not mean you are the right candidate,” Emmer said. “If we had had the right candidates, we would’ve had a lot more of them get through the primaries.”

In addition to finding candidates “from all different walks of life that actually reflect that community,” Emmer said, Congress should address issues such as flex time and housing allowances that would make it easier for women to have families and serve in Congress.

“There are a lot of women that, I will tell you, they should be the ones in the state legislature or in Congress, but instead their husband is doing it,” Emmer said, “because they’ve made the decision that they’re going to be the one operating the household.”

Emmer, The New York Times reported, got the job of NRCC chair over Missouri Rep. Ann Wagner who has worked on past GOP efforts to better engage female voters and recruit female candidates.

Illinois Rep. Cheri Bustos, Emmer’s Democratic counterpart, hopes to increase the number of Democratic women, who will make up nearly 40 percent of the party's caucus. Finding candidates who will bring more gender, ethnic and religious diversity to the caucus will be a major part of her recruitment effort.

Bustos hopes diversity will also grow on the Republican side because the composition of the House will never match the 51 percent of the population that’s female with Democrats alone.

"If the makeup of Congress truly reflected the makeup of America, then we would be a much better country and a better world," Bustos said.

Polls and academic research show Democrats place a higher value on electing more women to Congress than Republicans do, according to Republican pollster Christine Matthews.

Wyoming Rep. Liz Cheney, the one Republican woman who will be in House leadership next year, told Fox News after the election that the party needs to make sure it recruits female candidates. She dismissed the idea that Democrats should be applauded for electing more women, saying many of those newly elected are socialists whose ideas would hurt the country.

“It is very important for us to recognize that women make bad policy, too,” said Cheney, the incoming chair of the House Republican Conference. “So we need to have diversity. But we also need to make sure we understand that just being a woman doesn’t mean that you’re going to do the right thing.”

More: The race is on – again – as Congress' freshmen battle for the best office 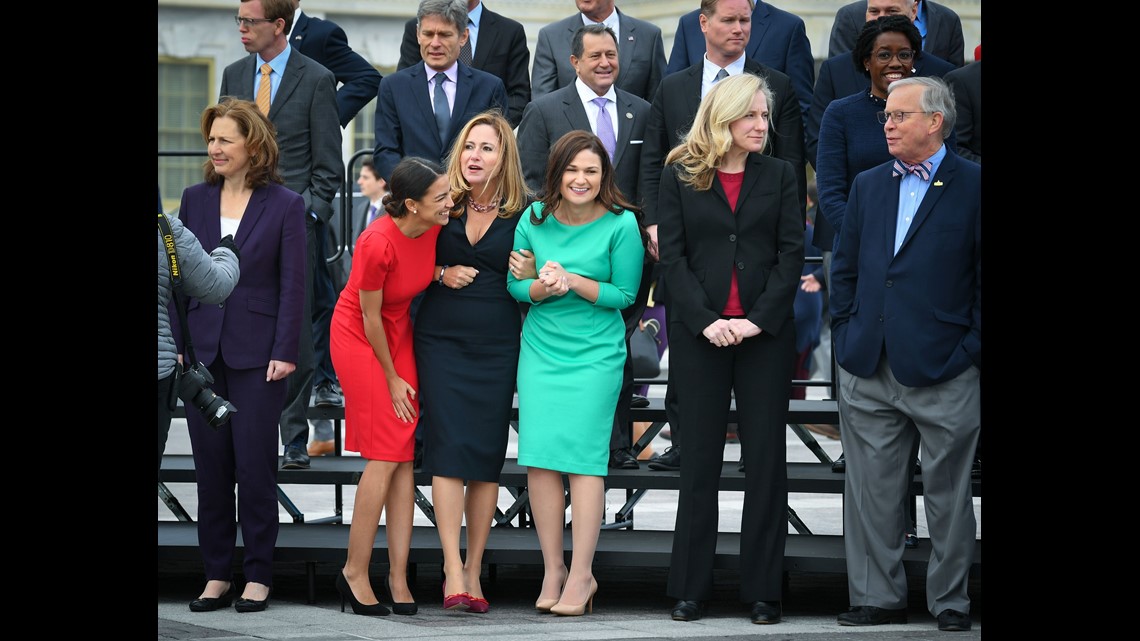