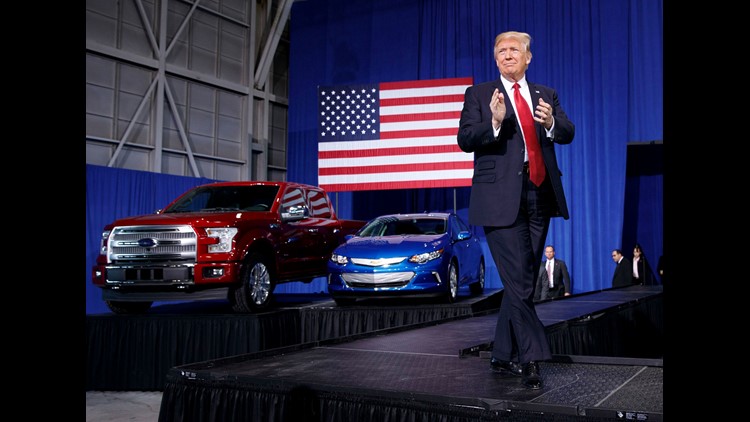 Photo by: Evan Vucci, Evan Vucci, AP
President Donald Trump arrives to speak at the American Center of Mobility, Wednesday, March 15, 2017, in Ypsilanti Township. In the background is a Ford F-150 and a Chevrolet Volt.

Why that new car is about to get more expensive
Author: Phoebe Wall Howard (Detroit Free Press)
Published: 9:46 AM PDT September 18, 2018
Updated: 7:31 AM PDT September 21, 2018
President Donald Trump arrives to speak at the American Center of Mobility, Wednesday, March 15, 2017, in Ypsilanti Township. In the background is a Ford F-150 and a Chevrolet Volt.
Evan Vucci, Evan Vucci, AP

In addition, if you're in the market for a new car, you probably should head to a dealership soon, because prices will be going up.

Trump's latest round of tariffs on Chinese imports will add costs to more than 100 car parts – a 10 percent levy on everything from tires and brake pads to engines and batteries – that go into vehicles made and sold in the U.S.

"It's going to be felt by Americans, and it's going to be a big deal," said Peter Nagle, senior analyst at IHS Markit. "Tariffs are taxes on consumption. Eventually costs will be passed down to the consumer. This will drive vehicle costs higher. It also includes a lot of body shop equipment."

Trump has campaigned on trade issues, saying new deals are needed with China and other partners, and he has imposed tariffs when talks go slowly.

He escalated a trade war between the two largest economies on the globe with the announcement on Monday of $200 billion in new tariffs. A 10 percent tax on thousands of imports from China takes effect on Sept. 24, rising to 25 percent on Jan. 1. China hit back on Tuesday, levying tariffs on $60 billion in U.S. products.

Analysts said it is unclear how much car prices will go up in order to absorb the costs of a trade war, but everyone agrees that prices must go up – and that parts from China are critical to the auto industry. And all that means car sales will drop as a result, too.

"This is definitely the “Mother, make it stop” point for the auto industry," said Jon Gabrielsen, a market economist who advises automakers and auto suppliers.

Finding a silver lining in the move is difficult, said Kristin Dziczek, vice president of the Industry, Labor & Economics Group at the Center for Automotive Research.

"China can wait us out," she said. "For the car industry, this means a lot of efficiency they've gained from building up the global supply chain is lost."

A 10 percent tariff will be applied to the U.S. this month. That will increase to 25 percent on Chinese goods starting Jan. 1, Gabrielsen said. That's just for parts, not the full cost of a vehicle.

“We are reviewing the list," said Ford spokeswoman Christin Tinsworth Baker. "What we would emphasize is that it is essential that governments work together to lower, not raise, barriers to trade. We encourage both governments to work together through negotiation to resolve issues between these two important economies.”

Fiat Chrysler declined to comment on the impact of the new tariffs. General Motors declined to respond to request for comment.

Gabrielsen said some of the costs will be passed on in sticker prices. "Prices are going to go up, but they won't go up by 25 percent," he said. "Vehicle sales already are in slow decline. This will probably will be quite a gut punch when they are forced to raise prices."

Automakers can produce cars for about a month before the costs associated with the 10 percent tariff take effect. By February, "people will feel it," Gabrielsen said.

"It covers literally everything that goes into the construction of an automobile, from the smallest components and material inputs like the cords in tires and shafts and gears and bearings all the way up to completed engines and in some cases chassis with engines mounted," he said.

Jeoff Burris, founder and principal of Advanced Purchasing Dynamics, which has been doing extensive work in automotive supply chain for the past 14 years, offered a grim assessment.

" Even at 10 percent, the hit to manufacturers will be significant; at 25 percent, for some, the impact will be catastrophic."

How much will prices rise?

National Automobile Dealers Association president and CEO Peter Welch said industry analysis outlined a scenario where a 25 percent tariff would increase the price of the typical vehicle sold in the United States by about $4,400.

A Center for Automotive Research study commissioned by the National Automobile Dealers Association found a 25 percent tariff would result in:

Welch urged leaders in Washington to exercise caution and emphasized that new tariffs would reduce consumer choice, increase the cost of used vehicles and raise the cost of getting vehicles serviced and repaired.

“NADA recognizes the importance to the United States of leveling the trade playing field; eliminating unfair trade practices; and keeping America’s automotive industry strong,” he said. “But a 25 percent tariff applied to all imports would hurt auto manufacturers, dealers, consumers and the economy as a whole. And the hardest hit would be our customers.”

Tariffs are a direct hit to consumers' pocketbooks, said Gloria Bergquist, vice president of communications and public affairs at the Alliance of Automobile Manufacturers.

"This decision would essentially cover every Chinese export to the United States, so it’s hard to see how consumers would not be caught in the crossfire."