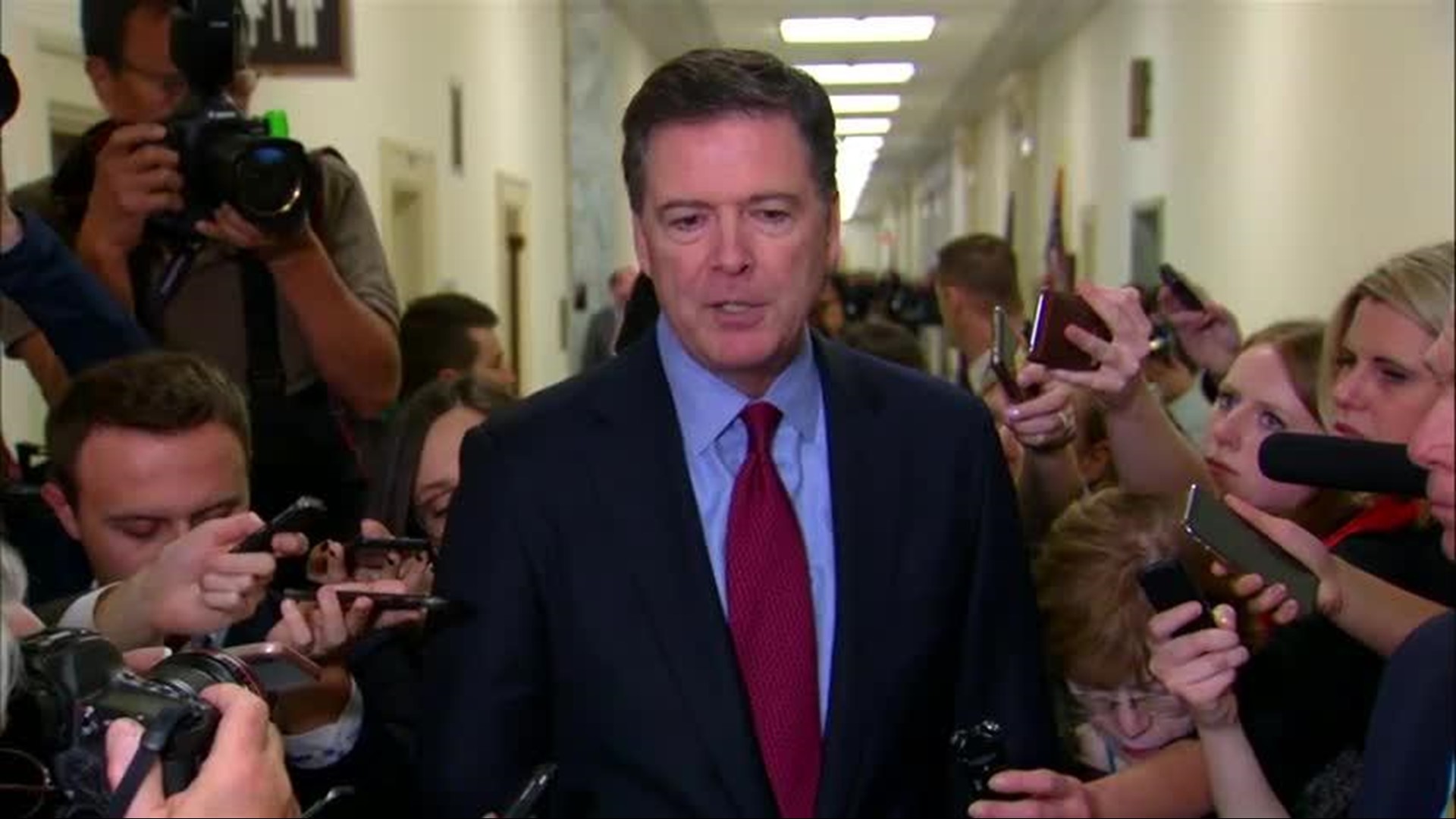 WASHINGTON – Former FBI Director James Comey emerged from a closed-door hearing Friday sounding exasperated over Republicans' continued questioning about his decision not to prosecute former Secretary of State Hillary Clinton for her use of a private email server in 2016.

"We’re talking again about Hillary Clinton’s emails, for Heaven’s sake, so I’m not sure we need to do this at all, but I’m trying to respect the institution and to answer questions in a respectful way," Comey told reporters after a full day of testimony before members of two House committees.

Before Democrats take control of the House in January, GOP leaders wanted to question Comey about his role in investigations into Clinton's email server and Russian meddling in the 2016 election. Once again split along party lines, Democrats called the hearing a waste of time while Republicans argued Comey didn't answer their questions.

The hearing was supposed to last one day, but Comey will return on Dec. 17 at Republicans' behest.

Rep. Darrell Issa, R-Calif., earlier said Republicans will demand that Comey return to address questions that attorneys from the Department of Justice and FBI are "guiding him not to answer."

"At a minimum, there’s no question that one of the disappointments in this deposition so far has been the amount of times in which the FBI believes that Congress doesn’t have a right to know, not based on classification or something above our level, but based on the vague interest of various elements," Issa said.

President Donald Trump tweeted about the hearing Friday evening and demanded that Comey be forced to answer all of the questions he was asked.

It is being reported that Leakin' James Comey was told by Department of Justice attorneys not to answer the most important questions. Total bias and corruption at the highest levels of previous Administration. Force him to answer the questions under oath!

Comey, however, said a forthcoming transcript will show that didn't happen.

"The FBI, for understandable reasons, doesn’t want me talking about the details of the investigation that is still ongoing," he said of the investigation into Russian interference in the 2016 election. "It began when I was FBI director, and so it makes sense that they don’t want me going into those details, but that’s a very teeny part of what we talked about today – a whole lot of Hillary Clinton’s emails, which will bore you," he said.

Comey, who Trump fired in May 2017, has already testified that he didn’t coordinate with the Democratic administration at the Justice Department or White House. But some Republicans have questioned whether investigators were biased. Trump himself has suggested that Comey wanted a job in a potential Clinton administration.

Rep. Jerry Nadler, D-N.Y., who is poised to become the chair of the Judiciary Committee, told reporters on his way into the hearing that he would shut down the GOP-led investigation when he takes the gavel in January. Democrats are still expected to investigate Russian interference in the 2016 election.

"It's a waste of time, to start with," Nadler said. "The entire purpose of this investigation is to (disparage) the real investigation, which is Mueller. There's no evidence whatsoever of bias at the FBI or any of this other nonsense they're talking about."

Comey appeared before members of the House Judiciary Committee and the House Committee on Oversight and Government Reform on a day of major developments in Justice Department special counsel Robert Mueller’s closely held investigation into Russia electoral interference.

"Sadly the Republican majority wishes to only ask questions still about Hillary Clinton's emails, all to distract from the big news today, which is what’s happening in court," said Rep. Ted Deutch, D-Fla.

"Mr. Comey is the right witness, but here for the wrong questions," Krishnamoorthi said. "We should be talking about the Russia investigation, and quite frankly obstruction of justice.

“I’m left with the impression that we got nowhere today.”

Krishnamoorthi described Comey's interactions with some of the Republicans on the panel as "a little tense."

Krishnamoorthi said Republicans asked their "usual" questions about whether Comey had prior knowledge of a secret court order they believe the FBI obtained improperly to monitor the communications of former campaign adviser Carter Page.

“I can recite these questions at this point,” he said.

Comey said he has "total confidence" that the Foreign Intelligence Surveillance Court order process was handled in a "thoughtful and responsible way."

"The notion that FISA was abused here is nonsense," Comey said.

Comey had contested a House subpoena ordering him to testify and demanded an open hearing because he was concerned lawmakers would leak partial statements. But he reached a deal with House Republicans in which a transcript of the interview will be released within 24 hours and that allows him to speak about it publicly, his lawyer David Kelley told the Associated Press on Sunday.

He said after Friday's hearing that the it was clear the lawmakers could have questioned him in a "open setting."

Rep. Jim Jordan, R-Ohio, a staunch Trump defender who is slated to be the top Republican on the Oversight Committee next year, insisted Friday morning it was normal protocol to have a private hearing rather than a public one. He did not respond to multiple reporters, including USA TODAY, who pointed out that the GOP-led committees had brought in former FBI agent Peter Strzok for a fiery public hearing in July.

Strzok's disparaging text messages about Trump prompted his removal from the ongoing inquiry into Russia's interference in the 2016 election. He has become a top focus of Republicans insistent that the FBI investigation into Russian interference is biased.

Democrats say the text messages showed poor judgment but do not amount to a biased investigation.

Former FBI director James Comey: A look at his career