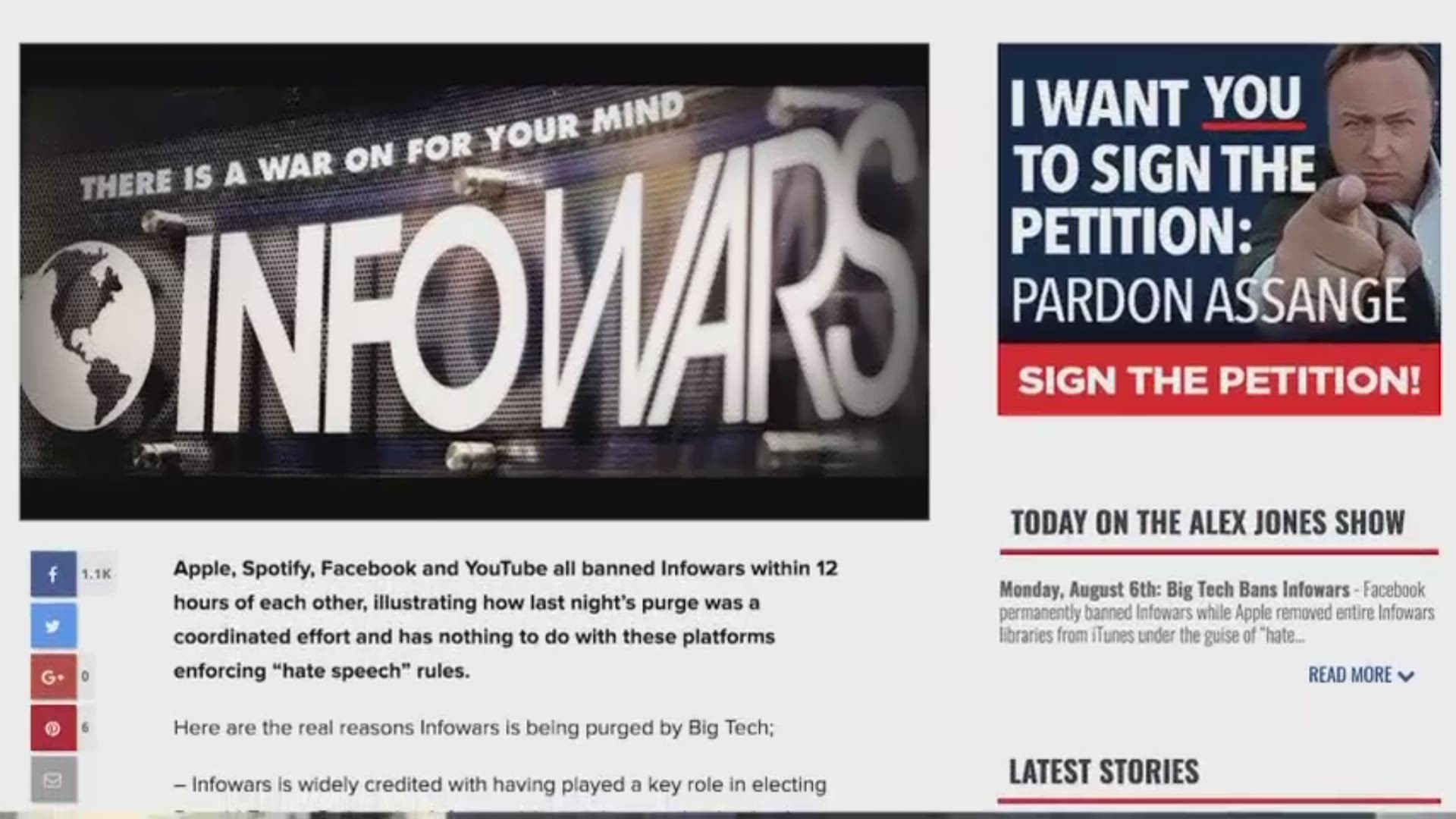 Talk about a rough Monday morning. Pundit Alex Jones found his radio and video show, and other content produced by the far-right site Infowars, removed from Apple, Facebook, Spotify and YouTube.

The cumulative actions represent the largest efforts yet against Jones, a conspiracy theorist who most famously promoted the idea that the 2012 Sandy Hook elementary school shooting never happened and was staged. Several families affected by the shooting, and an FBI agent who responded to the attack, have sued Jones for defamation. He is seeking to have the cases dismissed.

Facebook said on Monday that four pages belonging to Jones were removed for violating the social network's policy against hate speech. Also on Monday, the entirety of hundreds of episodes of "The Alex Jones Show" had been removed from music streaming service Spotify.

Those takedowns came just hours after Apple late Sunday removed all episodes of the show hosted by Jones and four other Infowars-related podcasts from Apple's iTunes and Podcast apps.

And later Monday, YouTube removed Jones and Infowars' channels from the video sharing service, with some pages labeled with the declaration the account was terminated for violations of community guidelines.

Until Monday, the major tech companies had been slow to remove Jones' content, despite a stated aim of halting the spread of fabricated news, as they tried to stave off claims that they were censoring political voices. Facebook -- facing criticism for Infowars' presence on the site -- detailed a policy of pushing down disputed posts so fewer users would see them while removing content for violating policies on hate speech and harassment. Spreading false news wasn't reason enough to boot a user from the site, its executives said.

Instead, tech companies have pointed to a breach of policies against hate speech, rather than misinformation, for removing Jones. Spotify removed several episodes of 'The Alex Jones Show' last week, citing violations of its policy against hateful speech. Online sentiment had been building against Spotify for days after subscribers found the episodes' listing on the service.

Prior to its action Monday, YouTube removed four of Jones' videos from his channel two weeks ago and suspended him from broadcasting live for 90 days saying the channel violated the company's graphic content policy.

Apple's move Sunday to remove five of six Infowars-related podcasts including "The Alex Jones Show" and "War Room" from its directories -- first reported by Buzzfeed News -- seemed to  initiate a domino effect. "Apple does not tolerate hate speech, and we have clear guidelines that creators and developers must follow to ensure we provide a safe environment for all of our users," the company said in a statement.

"Podcasts that violate these guidelines are removed from our directory making them no longer searchable or available for download or streaming," Apple's statement said. "We believe in representing a wide range of views, so long as people are respectful to those with differing opinions.”

Links to "RealNews with David Knight" by Infowars remains on Apple's podcast apps.

After removing four videos, one each on four of Jones' pages -- the Alex Jones Channel Page, the Alex Jones Page, the InfoWars Page and the Infowars Nightly News Page -- for violating "our hate speech and bullying policies," Facebook continued to get reports from users, it says.

Those pages were ultimately taken down Monday for "glorifying violence, which violates our graphic violence policy, and using dehumanizing language to describe people who are transgender, Muslims and immigrants, which violates our hate speech policies," Facebook says. Jones had already been placed on a 30-day block "for his role in posting violating content to these pages," the company said.

Facebook said none of its actions was due to false news found on Infowars-related sites.

When asked why YouTube took action because Jones and Infowars, the site sent this statement to USA TODAY: "When users violate these policies repeatedly, like our policies against hate speech and harassment or our terms prohibiting circumvention of our enforcement measures, we terminate their accounts."

The cumulative actions by the tech companies were hailed by Infowars' detractors with one person applauding "a little courage shown by our tech titans. ... Its good to see companies step up when people so flagrantly propagate falsehoods."

Finally, a little courage shown by our tech titans. There is still a such thing as objective truth and it’s good to see companies step up when people so flagrantly propagate falsehoods. https://t.co/2n82VVSB9q

Jones, during his show on Infowars.com, said he would have to remove the site's links to social media because Infowars' content there "is all gone. They blew it all away in the middle of the night."

What conservative news outlet will be next? 🤔

The one platform that they CAN'T ban and will ALWAYS have our live streams is https://t.co/OQtch0tDED ✊

Some commenters on Twitter posted concerns about the potential harm of squelching voices, even if Jones' and Infowars had in the past fueled conspiracy theories such as
Pizzagate
-- a far-fetched falsehood that Hillary Clinton operated a child sex ring at a Washington D.C. pizza restaurant, where in December 2016 a man fired his weapon off inside the pizza shop. Jones last year apologized to the restaurant owner.

"I don’t support Alex Jones and what InfoWars produces. He’s not a conservative. However, banning him and his outlet is wrong," said Brent Bozell, founder and president of the Media Research Center, a non-profit conservative group that monitors liberal trends in the media.

"It’s just the beginning," Bozell said in a statement. "We are rapidly approaching a point where censorship of opposing voices is the norm. That’s dangerous.”

Similarly, Sen. Ted Cruz, R-Texas, recently questioned whether Facebook should be removing publishers from their massive social network at all. After seeing a July 27 story reported by Mashable about Jones' 30-day ban, Cruz tweeted: "Am no fan of Jones — among other things he has a habit of repeatedly slandering my Dad by falsely and absurdly accusing him of killing JFK — but who the hell made Facebook the arbiter of political speech? Free speech includes views you disagree with."

Am no fan of Jones — among other things he has a habit of repeatedly slandering my Dad by falsely and absurdly accusing him of killing JFK — but who the hell made Facebook the arbiter of political speech? Free speech includes views you disagree with. #1A https://t.co/RC5v4SHaiI

But the constitutional protection of free speech is meant to prevent the government -- not businesses or organizations -- from censoring citizens.

"As private companies, Apple, Facebook and Spotify can decide what content appears on their platforms, so I wouldn't call (the tech sites' actions) a violation of speech," said  Lata Nott, executive director of the First Amendment Center. 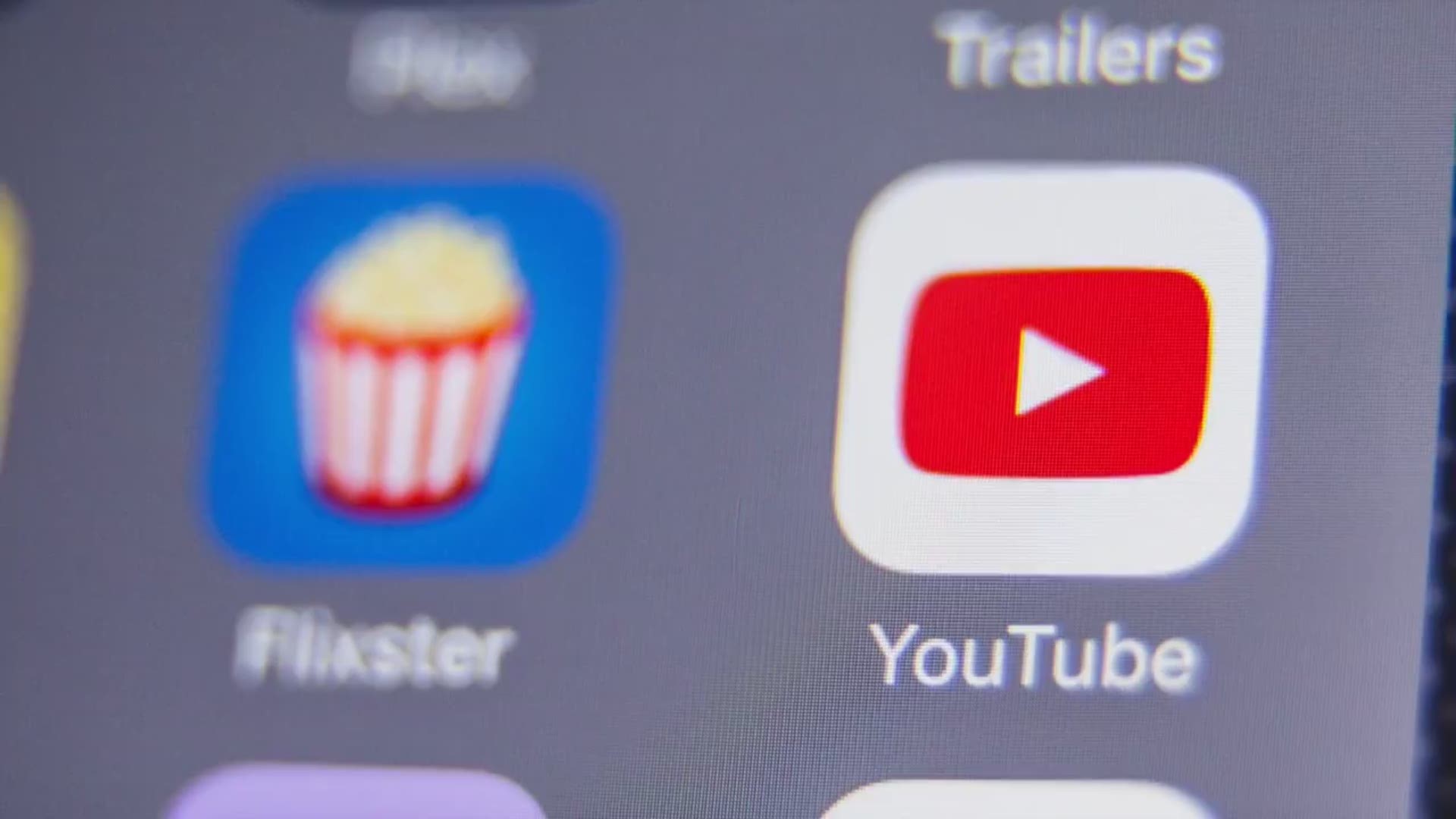