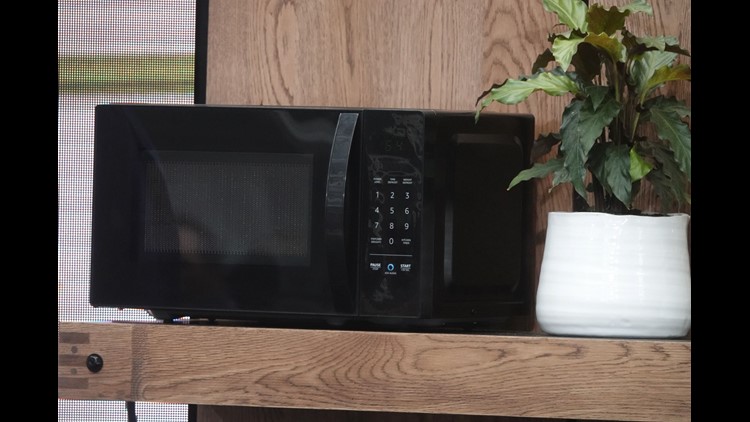 That's a key takeaway from Alexa-driven products Amazon launched Thursday, from an anticipated AmazonBasics Microwave to a small cassette-sized gadget, Echo Auto, that will let Alexa hang out with you in the car.

Amazon’s designs on smart home domination and beyond is nothing new, and is no different from Apple, Google, or Samsung. Each company wants to lure you into its own ecosystem – and keep you there.

Jeff Bezos’ crew appears to have momentum on its side. Amazon now claims more than 20,000 Alexa-compatible devices from more than 3,500 brands, up from some 4,000 devices and 1,200 brands in January.

The company’s latest product avalanche comes with refreshes to the Echo family of smart speakers, such as the $34 Echo Input. Through a 3.5 mm audio cable or Bluetooth, the Input will let you add Alexa to some of your existing third party speakers.

Amazon also announced a $24.99 Amazon Smart Plug to control smart lights, coffee makers and other connected household appliances by voice. And a $29.99 wall clock with an LED ring that will let you visualize the multiple timers you can set by voice.

But the compact countertop microwave that will be released on Nov. 14, and that you can preorder immediately, is, pardon the pun, what is likely to get many of you cooking.  Letting Alexa handle the job via voice is potentially appealing. You’ll be able to cook by voice: “Alexa, microwave two potatoes” or   “Alexa, reheat the coffee.”

I should point out that Alexa is not built into the microwave itself, so for this kind of hands-free control, you’ll still need a compatible Echo speaker paired to the microwave. There’s also an Ask Alexa button on the microwave.

More: Fake Apple products: Here's how to avoid being fooled – and endangered – by counterfeits

More: Marvel's 'Spider-Man' for PlayStation 4 swings to a record-breaking opening

Of course, vocal automation only goes so far. You still have to place the food in the oven yourself – sorry, there’s not yet an Alexa robot to do that for you. In all seriousness, though, a voice-controlled microwave is not only convenient, but it might benefit people who are blind or have low vision.

It won't shock anyone given Amazon's pedigree that there's a shopping play here too. Amazon’s microwave also can automatically reorder popcorn when you run low, through the company’s Dash Replenishment technology. There may be only a matter of time before there’s also some kind of connection with Amazon-owned Whole Foods.

This raises questions too. Do we want Amazon to know how often we nuke, say, a potato?

And forget Alexa for second, there’s another disruptive element here, notably the price. Amazon is charging just $59.99 for the microwave, and that is not a misprint. Rival appliance makers, all of whom presumably sell their own ovens on Amazon, must be shaking in their boots. Assuming this 700-watt microwave proves to be even halfway decent, I think Amazon is going to sell a lot of them.

Now lets shift to the car. You can also already anticipate the many ways that the new Echo Auto gadget might be useful while you’re at the wheel: “Alexa, add milk and yogurt to my grocery list.” “Alexa play my Audible book.” “Alexa, what’s the traffic?”

Amazon says you can set up “routines” through Echo Auto too, to, for example, turn on the lights in your house automatically, the moment you pull into your driveway.

Initially, Echo Auto will only be available by invitation only – for just $24.99. Amazon plans to double the price once Echo Auto is opened up to everybody.  It also seems smart that Amazon is pitching Echo Auto as an inexpensive after-market product that won't require a factory install.

More broadly, Amazon is making other promises for Alexa, with initiatives aimed at making it easier to set up a smart home in the first place. We'll see.

Amazon also attempting to let you go deeper into a conversation with its digital assistant without you having to bark out the “Alexa,” wake word each time.

And Amazon is also launching Alexa Hunches, using artificial intelligence to learn your behavior over time and make predictions of what you may want to do next. Say good night to Alexa, for example, and Amazon’s assistant may remind you to lock your door.