Man stole car with passenger inside, fled from officers near Riverfront Park Saturday

The Spokane Police Department said Guerin got into the driver's seat and stole the van with the passenger still inside. 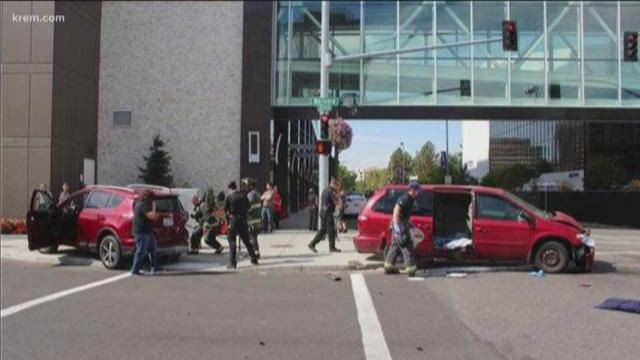 According to officials, the crimes took place at the Safeway at Northwest Blvd. and Ash. A female arrived at the Safeway and left her male passenger in the van while she went inside, officers said.

The suspect, Guerin stood in the parking lot with no shoes or shirt and decided to steal the van.

The Spokane Police Department said Guerin got into the driver’s seat and drove off with the passenger still inside the van.

While driving at high speeds eastbound towards Division St., Guerin threatened the passenger and did not give him the opportunity to exit the van, officials reported.

While at Division and Jackson Guerin forced the passenger out of the van while at a high rate of speed, police said.

According to officials, Guerin continued south on Division at a high rate of speed. The suspect then went westbound on Spokane Falls Blvd. and crashed into another vehicle at Bernard.

Guerin then fled westbound on foot from the crash and ran into Riverfront Park near the Red Wagon, officials said. Officers arrived on scene shortly after and took Guerin into custody.

Spokane Police would like to thank the citizens called into 911 and gave detailed locations and descriptions of this incident.