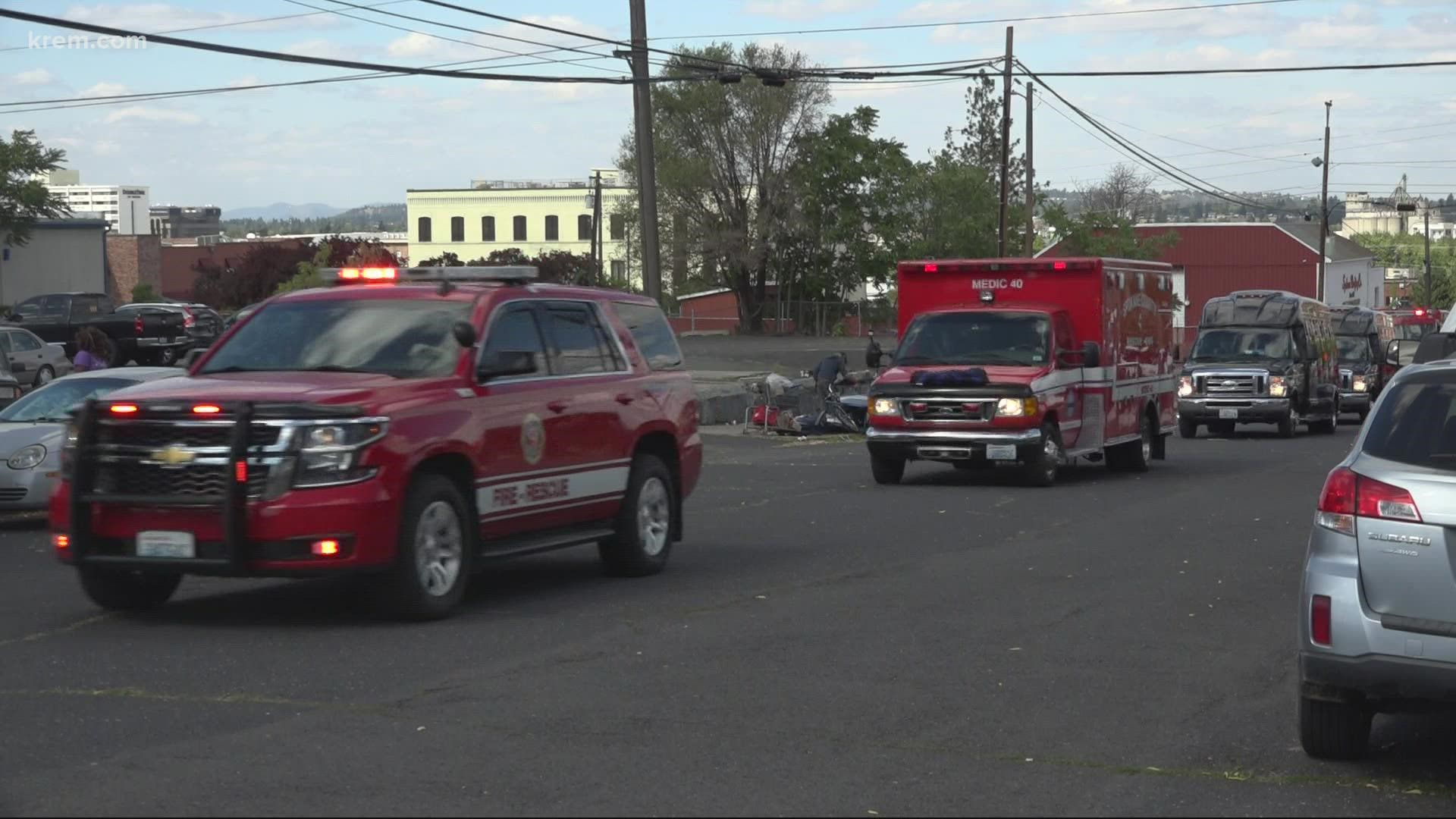 SPOKANE, Wash. — A procession was held on Tuesday for a Spokane County firefighter who died in the line of duty.

Lieutenant Cody Traber was moved from the Spokane County Medical Examiner's building with a formal procession to the Heritage Funeral Home located at 508 N. Government Way on Tuesday, Aug. 31, at 1:30 p.m.

His fellow firefighters, motorcycle police and fire engines escorted his body in the ambulance to be taken to the funeral home.

Spokane County Fire District 9 Chief Jack Cates initially wrote in a Facebook post that Lieutenant Cody Traber died while fighting a brush fire on Thursday. The fire district clarified during a press conference on Monday that Spokane County Fire Engine 92 responded to reports of a fire near Highway 395 and Wandermere Road. However, when crews arrived they were unable to find any evidence of a fire in the area, according to Division Chief Bob Shindelar.

Traber went up to the Wandermere Bridge to gain a better vantage point in order to locate the fire. Shortly after he got there, Traber fell off the bridge. He was pronounced dead at the scene. No wildfire was found, according to Shindelar.

Traber was an 18-year veteran of District 9 and previously served at Stevens County Fire District 1, Cheney Fire Department and the Department of Natural Resources Arcadia District. Traber leaves behind his wife, Allisyn, and four young children.

The Washington State Patrol, Spokane County Sheriff’s Office and Washington Department of Labor and Industries are investigating Traber’s death. Additional details about the accident will be released later. There is no evidence of foul play, Shindelar said.

A PayPal account has been set up for Cody Traber's family through Spokane County Fire District 8 Firefighters Local 3711. They are also accepting checks made out to “local 2916 Benevolent Association” and mailed to Local 2916 PO BOX 18336 Spokane WA 99208 or dropped off at any Fire 9 fire station.

He wrote, "As Firefighters, we know the dangers and risks that exist in the Line of Duty.  Yet, when we lose someone it is never easy."

The Colfax Fire Department also lost someone in the line of duty over the weekend. Long-time fire chief and volunteer firefighter Jim Krouse collapsed and died of an apparent heart attack while fighting a brush fire on Green Hollow Road on Saturday afternoon. Medics were unable to revive Krouse, who was on his fourth call of the day.