A fire can have little to no physical flames burning and still be 0% contained. 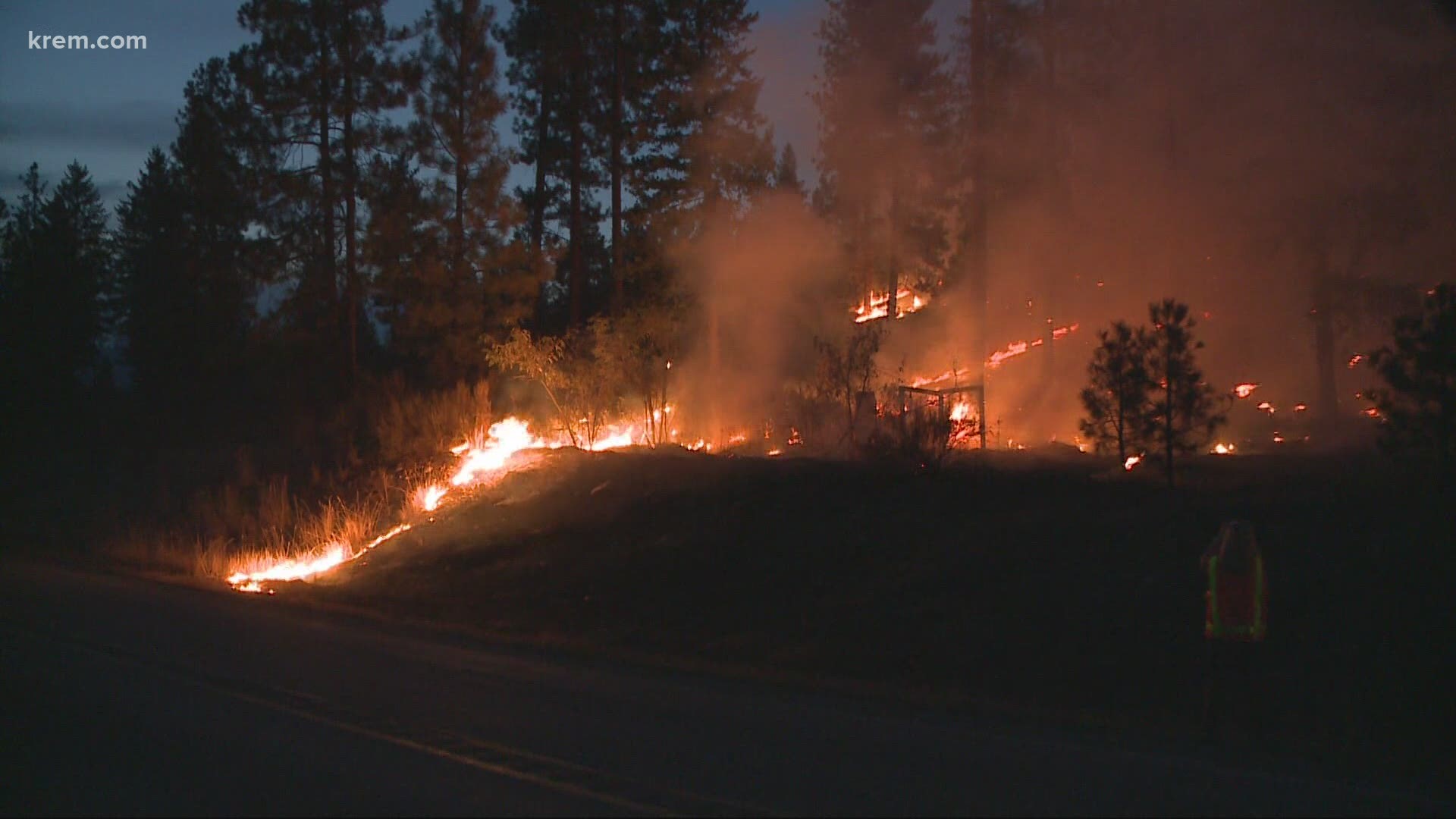 SPOKANE, Wash. — When a wildfire sparks, they can start burning through fuels quickly and move fast. That's when firefighters' initial responses are critical to stop what they call forward progression.

Those aggressive burning flames are different than containment percentage. A fire can have little to no physical flames burning and still be 0% contained.

In order to fully understand that containment percentage, though, these firefighting terms are important to know:

Incident command post: This is home base for firefighting crews. It is where they sleep and eat and is typically in a town close to the fire.

Containment Line: This is a trail that firefighters dig to dirt level, getting rid of any potential fire fuels. It runs along the perimeter of the fire to stop it from burning more ground. Washington State Patrol Trooper Jeff Sevigney said the line is 100 to 200 feet wide depending on the fire.

Forward Progression: This is when a fire continually jumps over the containment line, burning more ground.

Trailing: Trailing is the technique used by firefighters to build a containment line. Crews line up and dig down to the dirt by hand. They can also use bulldozers to accomplish this if the terrain is right.

The black: That is the burned area of a fire, appropriately named by the color of the ground after a fire passes through.

Hot Spots: Like it sounds, they are spots around the fire or in the black that are still dangerously hot.

"If the right conditions presented itself with wind and low humidity, the fire can actually come back out of the ground," Sevigney said.

That's where mopping up comes in. Mopping up is when fire crews find hot spots and put them out. They'll use pickaxes to dig into the ground that is too hot, then douse the area with water.

When a fire starts, the first thing crews work to do is stop forward progression.

“They’re very dramatic. There’s a lot of smoke, a lot of activity with firefighting resources. Hopefully, in a short period of time, we get the fire knocked down or stopped,” Sevigney said.

Once they stop the fire, most of the smoke and flame are no longer visible, but a lot more work must go into making the area safe. That's what effects containment percentage.

Simply put, containment percentage is the level of confidence fire crews have that the fire will not re-spark and start to burn any ground outside their containment line.

Once the containment line is completely bolstered around the fire and crews are confident any hotspots re-flaring won't reach new fire fuels, that is when a fire is considered 100% contained. That is why often, a fire can be only 20% contained yet look like it is not burning anymore.