'He was a father to all of us': Colfax firefighters mourn loss of long-time fire chief

Jim Krouse died of an apparent heart attack while responding to a brush fire on Saturday. 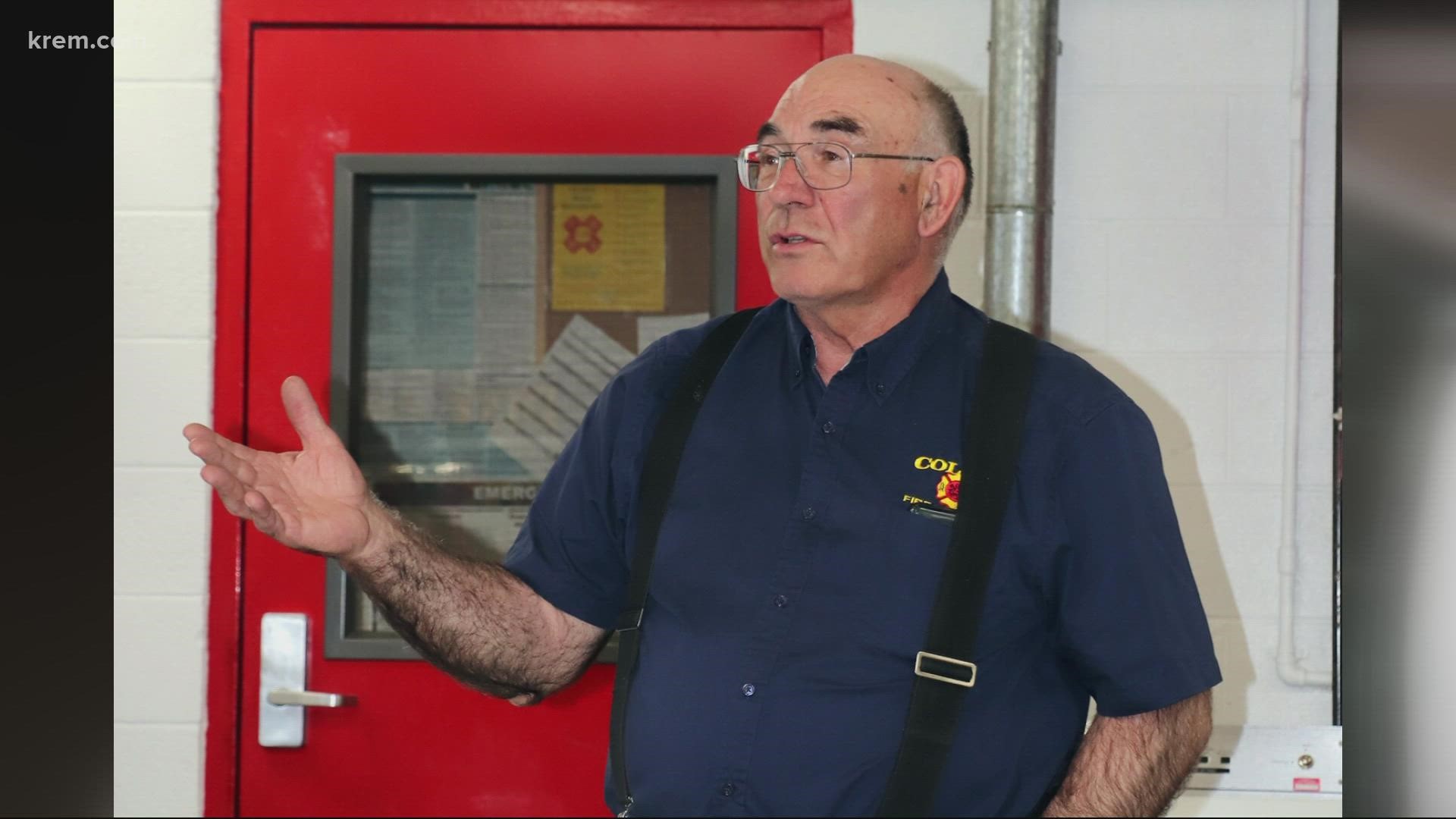 COLFAX, Wash — Members of the Colfax Fire Department heard the call that all firefighters fear on Saturday.

"When you hear that call over the radio that a firefighter is down, your heart just sinks," said Colfax Assistant Fire Chief Craig Corbeill.

That call was for long-time Colfax fire chief and volunteer firefighter Jim Krouse. According to Pullman Fire Department spokesman Glenn Johnson, Krouse collapsed of an apparent heart attack while fighting a brush fire on Green Hollow Road on Saturday afternoon. Medics were unable to revive Krouse, who was on his fourth call of the day.

"He spent his morning taking care of three emergency EMS runs, and he ended his career on a fire," said Colfax Fire Chief Michael Chapman.

"Just exactly how he would have wanted to do it," Corbeill added.

Krouse had served as the Colfax fire chief from 1972 to 2010, and continued to work for the department up until his death. His father had previously been the fire chief in Colfax, and he leaves behind a son who his colleagues say works for the Spokane Fire Department.

In his more than 50 years with the department, those around Krouse said he never lost that excitement that most cadets have when they begin their careers. In fact, Krouse's colleagues said he was willing to do any of the duties required of firefighters, including pulling line, which is what Krouse was doing when he collapsed on Saturday.

Throughout his more than five decades with the department, Krouse touched the lives of those around him.

"He was a father to all of us, and had a huge heart," Corbeill said.

"Yeah, he'd sit down. I mean, I've been here with Colfax full time for 20-plus years, and if I had a call bug me, I could call him and he'd come in and we'd work it out," said Scott Kruse, a captain with the Colfax Fire Department.

Krouse was more than just a firefighter to his neighbors in Colfax. He had also been a meat grinder for decades, Corbeill said, and was known as the place to go for cuts of meat in Colfax. Corbeill also said Krouse loved to hunt and fish, and ran a hobby farm.

In the years before Krouse's death, the town of Colfax came together to show their appreciation for a man known best for his love of helping his neighbors.

"We honored Jim a couple of years ago for 50 years of service to the department and to the community, and it was a really great treat for us to have his whole family here and in our station," said Corbeill. "We held an open house and I'm thrilled we got to do that for him."

"The whole community came out for it," Chapman added.

On Saturday, the community came together again to honor their fallen friend.

"They lined up at the hospital in an honor guard and brought him out, covered with an American flag, and we led the procession down to the funderal home through town, past the fire station for him," Corbeill said. "That included trucks from all across the region."

Saturday wasn't the last time Krouse will be honored for his service. The Colfax Fire Department said it plans on holding a memorial service for Krouse in the coming weeks, and they expect fire crews from across the state to attend in Krouse's honor.