The suspect told detectives that he decided to commit the shooting the day before when he flipped a coin. 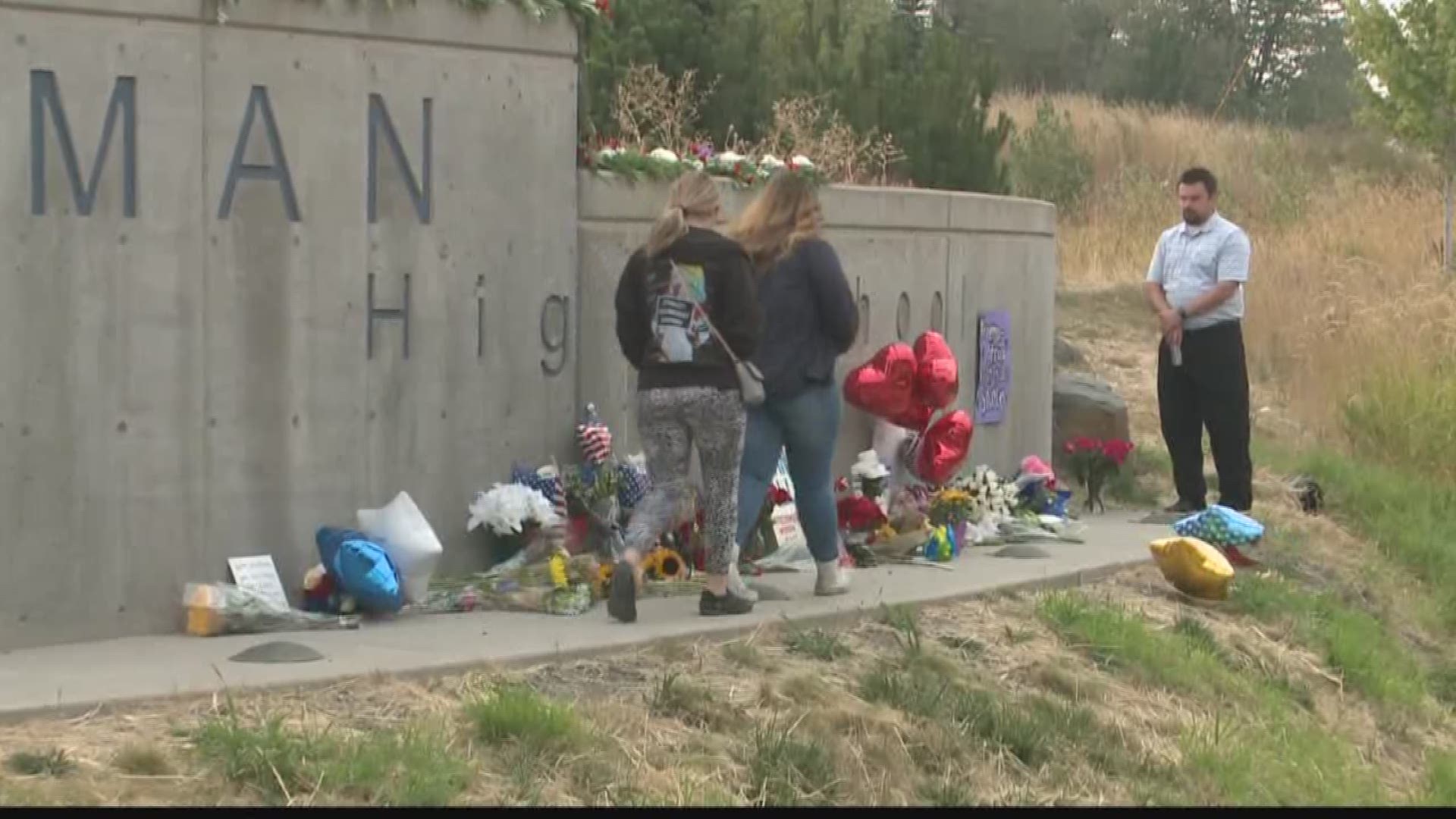 WARNING: The details in this story could be considered disturbing.

Caleb Sharpe is accused of killing Sam Strahan and injuring three girls in a shooting at Freeman High School on September 13.

According to court records the suspect was interviewed by a detective after shooting. He had recently shaved his head, had blood on his face, was wearing a black jacket under a t-shirt with the “Punisher” logo on it, court documents showed.

The suspected shooter told police he had started watching Columbine documentaries about a year ago but he decided the shooters were stupid because they were “overblowing it so much” but he began to like their plan more and more, court records said. He said he also watched things about Sandy Hook but decided they were not smart because they killed themselves at the end. Court documents show he also watched a documentary called “Mind of a Rampage Killer” about 10 times.

The accused said he knew Sam Strahan and they used to be friends but they drifted away from one another. According to court records, the suspect said he had been building up anger at people for months, even years and he had been thinking about doing the shooting for two years.

The suspect told detectives that he decided to commit the shooting the day before when he flipped a coin, heads meant he would do it and tails meant he would not do it and never think about it again. He said the coin landed on heads.

The suspect told police he walked into the school with a golf bag that had an AR-15 inside and seven boxes of extra .223 cartridges for the firearm. He said he also had a .32 caliber pistol in the left pocket of his jacket. Court documents said the guns belonged to his father and the suspect has taken them without permission.

The accused said he put the bag under the bus and got it out when the bus got to school. According to court documents, the suspect put in his ear plugs “for shooting guns” and walked around the outside of the building. He told detectives he went to the upstairs hallway and it was filled with people. He said he checked for a couple seconds to make sure his three friends were not there. Court documents said he opened his bag, tried to load the AR-15 but it got jammed. He said he kept pulling the trigger but nothing happened, so he took the handgun out of his coat.

The suspect said Strahan was standing close by at the time and he shot him once in the stomach and once in his right cheek. Court documents said Strahan fell and the suspect “didn’t really care if he was dead or anything so” he began firing down the hall into a crowd. The suspect said he shot three other students he did not know. Court records said he was just randomly shooting when the gun malfunctioned. He said he pointed the pistol at the floor and it fired one time by accident. He tried to fire it again and it clicked so he threw it on the floor, according to court documents. He said when he looked up after clearing his handgun jam, all the students were gone.

A search warrant was later served at Sharpe’s home. Court records said investigators found two coins on the floor of the suspect’s bedroom, one was a quarter that was tails side up and the other was a penny that was head side up.

A notebook with the suspect’s name on it was also found, according to court documents. Inside the book was a diagram of Freeman High School, a large reticle (crosshairs) with a quote on each corner which read “They will be my slaves in the afterlife,” “Killing is fun,” “I am smarter than the cops” and “Did you figure out my name yet?,” court documents stated. One page in the notebook had a hand drawn “Punisher” logo and the phrase “wait till school,” according to court records.

Another notebook that contained several handwritten notes was also found by investigators. Court documents said had the full rifleman’s creed and select quotes from the movie “Full Metal Jacket.” Another read, “I am a Marine I am not Caleb Sharpe,” said court records. In a larger note the suspect goes on a rant about how he hates himself, cannot do anything right and does not deserve to live, according to court documents. Another note investigators found listed several former mass shooters including a “Latest Edition NAMELESS,” which refers to the suspect’s alter ego, according to records. The last note found listed several weapons and their carrying capacity, court documents stated.

Court documents said investigators also found a marked up Freeman High School yearbook in the suspect’s bedroom. The word Free was marked out of Freeman on the cover of the yearbook as was the name of the creator, according to court records. Investigators said on the photo page of the yearbook was a large “X Kill” and 26 photographs of students had been crossed out, including Strahan’s photo. Court documents said eight other pictures had been crossed out and scribbled over, including the suspect’s own picture.