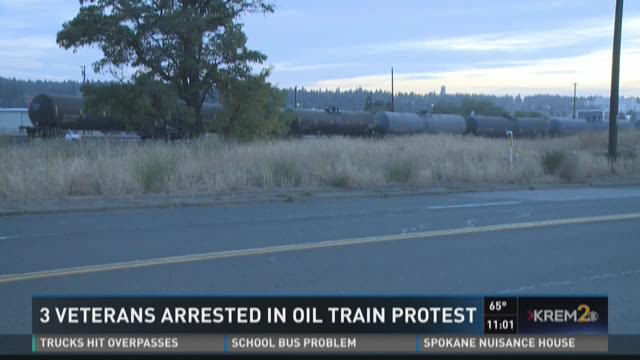 Members of the group Veterans for Peace said they are tired of waiting for city officials to pass laws that would stop oil trains.

“People have given up hope that the local government is going to do anything,” said Thomas Linzey, attorney for the protestors.

In August, a group of grandmothers who call themselves the “Raging Grannies” were arrested for blocking the tracks in protest.

In the last month, Direct Action Spokane has stopped a dozen trains, but only a couple were fully loaded with coal or oil.

City leaders said a legal battle with the railway might be costly.

“I think people are responding by saying climate change is pretty costly, too,” said Linzey.

In September, six protestors have been charged with obstructing a train and trespassing.

Members of Veterans for Peace said they plan to continue their actions until city leaders take note.

“Whether you’re concerned about oil trains exploding, like they did in Mosier, Oregon or climate change, people need to make more direct action that they’ve taken in the past. It’s clear that the local government isn’t going to help them,” said Linzey.

Police did give protestors a warning and the opportunity to leave the tracks before they made any arrests.