Team Gleason works to specifically increase service to people with ALS every year. 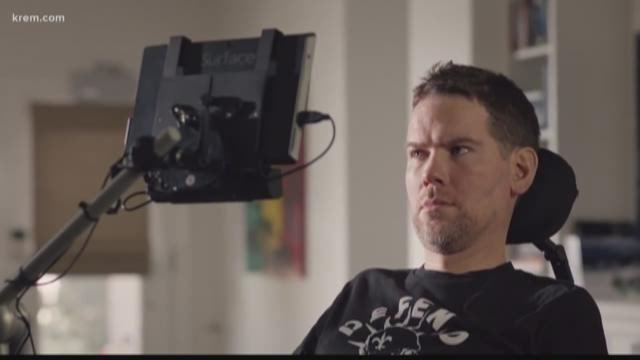 Blair Casey with Team Gleason is in town this weekend to thank supporters of the Gleason Golf Classic, a critical local fundraiser that supports Team Gleason's mission.

"There is a very strong contingent here in Spokane. Steve lives in New Orleans but he always says my heart is in the Pacific Northwest," Casey said.

Team Gleason works to specifically increase service to people with ALS every year.

“We specialize in technology, specifically communication devices, and allow people with ALS to continue to communicate, be productive with their eyes when their body does move anymore. We also help people with specialized equipment and send people on life changing adventures,” Casey explained.

“With the Steve Gleason Act 80 percent of the devices covered by Medicare and the remaining 20 percent is responsible by individual or secondary insurance and Team Gleason also works to support that balance,” Casey explained. “It’s a huge victory seeing that Steve Gleason Act will be there forever and we don’t have to worry about it, and the ALS community doesn’t have to worry about it, which is one less thing that’s on their plate.”

It is hard to fathom what this is like for an ALS patient and not being able to afford a way to communicate.

“Try it. Try not speaking. You know what I mean? Try being confined to a chair and not being able to talk to anybody. Not being able to communicate with the world. These devices are people’s outlets,” Casey said. “Having a voice is something every human being deserves.”

Casey said Team Gleason is very excited about 2018 and the new things they are working on.

“We always looked at technology, communication devices, independence, how can we push that envelope? In 2018, we are providing home automation so it’s another added layer of independence. So an individual with ALS using their communication device they can control their environment, they can turn on and turn of the lights, change their TV, turn on a fan, change the thermostat, these small things that we think are quote unquote luxuries,” Casey said.