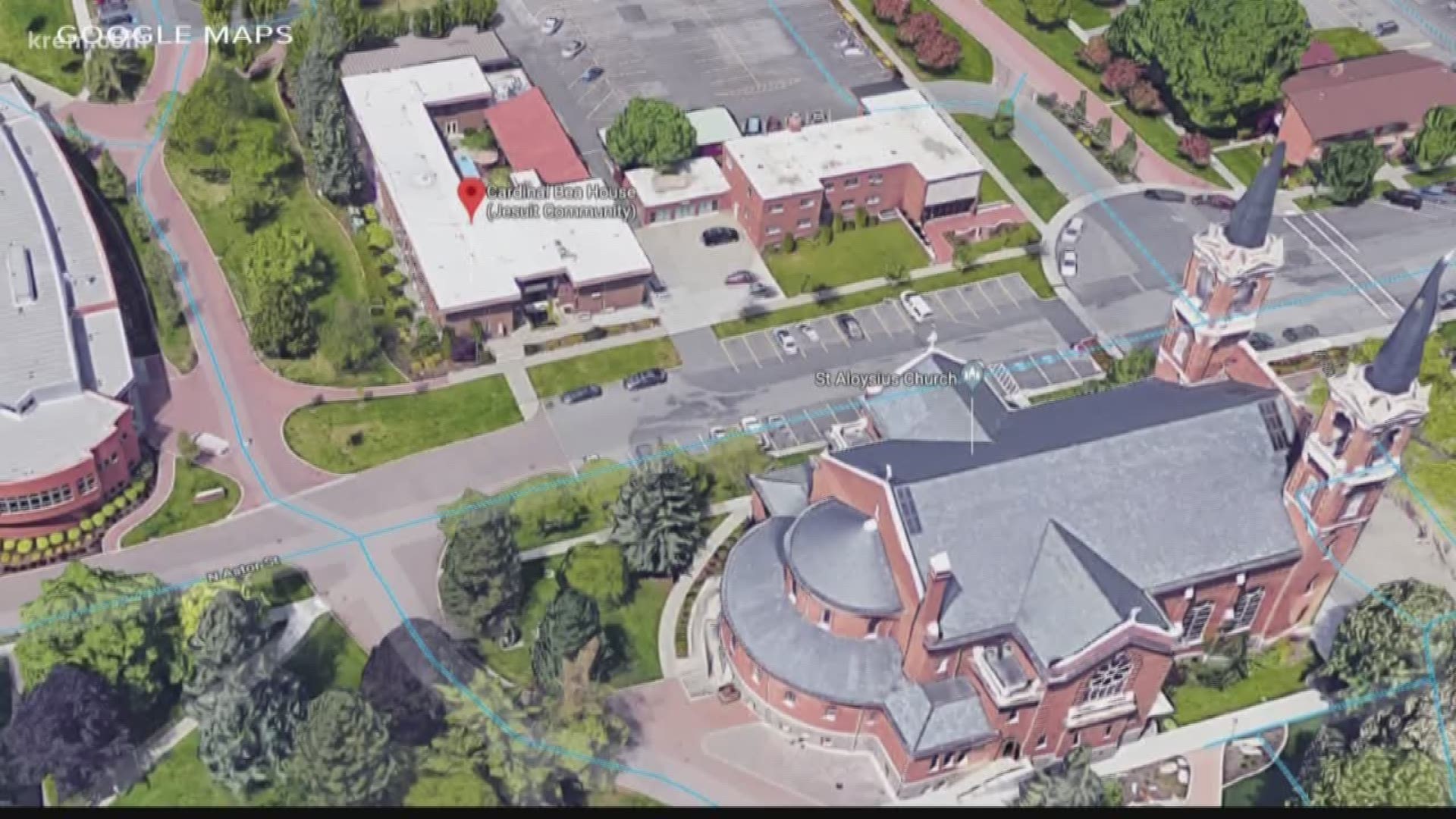 Bishop Thomas Daly of the Diocese of Spokane said both the Jesuits and Gonzaga University did not inform him about seven priests accused of sexual abuse living at Cardinal Bea House on the university's campus.

This comes after a recent investigative report from the Center for Investigative Reporting claiming that Jesuit priests accused of sexual abuse and misconduct retired at the Cardinal Bea House on Gonzaga University’s campus.

A statement released on Tuesday by the Jesuits West Province said that Jesuits with credible allegations are on "safety plans" and reside at Sacred Heart Jesuit Center, the Province's senior healthcare facility in Los Gatos, California.

The Province said safety plans with credible allegations of abuse are reviewed annually and audited by an outside safety consultant that provides accreditation for prevention of sexual abuse of minors.

The Center for Investigative Reporting investigation mentioned the “safety plans” for abusers that banned sexually abusive priests from commingling with students.

Gonzaga University President Thayne McCulloh addressed those safety plans in a Dec. 18 letter addressed to alumni, parents and friends, writing that he learned there had been priests under supervised “safety plans” living at the Jesuit retirement community.

“It was not until 2016, when the Province chose to begin relocating a number of retired men to the Sacred Heart Community in Los Gatos, that I learned that among them were Jesuits who had been on safety plans (and were moved). The first notification I had that Fr. James Poole lived at Bea House was when the US Jesuits West list was released on Dec. 7, 2018; I did not know of Fr. Poole, or his history in Alaska, until the investigative report aired this past weekend,” McCulloh wrote.

“Following the lessons learned out of bankruptcy, I had relied upon the Province to inform of us any Jesuit whose history might pose a threat to our students or campus community. I deeply regret that I was not informed of the presence of Fr. Poole, nor any other Jesuits who might pose such a danger, at Cardinal Bea House,” he continued.

The Jesuits West Province said safety plans consist of several elements, including restricting the Jesuit from public ministry as a priest, restrictions from contact with minors, travel restrictions and required monthly meetings with a delegate about adherence to their Safety Plan.

A statement from Diocese of Spokane says that priests who wished to live at Gonzaga University, but not actively minister, have been required to present a Testimonial of Suitability to the Diocese. That policy has recently been revised, according to the statement.

The Diocesan Safe Environment committee began the process of updating the policy in December 2017 and Daly approved the changes in November 2018, according to the statement.

The policy now requires clergy — including retired priests — who wish to reside for more than 30 days in the diocese but not actively minister to complete a strict process. Under this new policy these priests from outside the diocese wishing to reside in eastern Washington must:

1) Present a Testimonial of Suitability letter, including a request for faculties, from one’s proper ordinary attesting that he is in good standing and nothing in his background precludes him from serving in a ministry with minors.

5) Complete a background check consent form. The diocese will then process the check and notify the clergy member and his ordinary of any unexpected results. Additional background checks will be required every five years.

Jesuit priests with credible allegations of sexual abuse of a minor are not currently and will not be assigned to Gonzaga University's campus in the future, according to the statement released by the Jesuits West Province on Tuesday.

The statement reads, in part:

Jesuits West guarantees that no Jesuit with a credible allegation of sexual abuse of a minor is currently or will ever be knowingly assigned to Gonzaga University or the Jesuit community on its campus, nor to any Jesuit work in the Province.

The Jesuits West Province ended the statement with an apology to victims and families:

Jesuits West apologizes to the victims and families who put their trust in a Jesuit, only to have that trust so profoundly betrayed. Jesuits West has both a zero-tolerance policy for credible allegations made against a Jesuit involving a minor or a vulnerable adult and stringent procedures to ensure the safety of minors. No Jesuit who has a credible allegation of sexually abusing a minor is allowed to remain in public ministry.

The recent Reveal from the Center for Investigative Reporting story is centered on Fr. James Poole, a priest who resided in Nome, Alaska. He founded a Catholic mission radio station broadcasting his Jesuit sermons along with contemporary pop hits.

The investigation is a partnership with the Northwest News Network.

“Behind the radio station’s closed doors, Poole was a serial sexual predator. He abused at least 20 women and girls, according to court documents. At least one was 6 years old. One Alaska Native woman says he impregnated her when she was 16, then forced her to get an abortion and blame her father for raping her. Her father went to prison,” the authors of the article wrote.

According to the article, a Jesuit supervisor also warned a church official that Poole “has a fixation on sex…some sort of mental aberration that makes him see sex everywhere.”

The article claims that Poole, along with other Jesuit priests, retired at the Cardinal Bea House.

For more than three decades, Cardinal Bea House on Gonzaga’s campus served as a retirement repository for at least 20 Jesuit priests accused of sexual misconduct that predominantly took place in small, isolated Alaska Native villages and on Indian reservations across the Northwest, according to the investigation.

Furthermore, Jesuit correspondence shows a longstanding pattern of officials in the Oregon province – including Washington, Oregon, Montana, Idaho and Alaska – acknowledging issues of inappropriate sexual behavior but not releasing that information to the public. Priests were often reassigned after abuse was discovered, sometimes to another Native community.

The investigation claims Gonzaga administration did not respond to requests for an interview to answer whether the administration or student body were aware of the presence of known sexual offenders on campus.

I write today in light of a recent investigative report entitled, "Sins of the Fathers." The account first focused on the horrifying, predatory sexual abuse of Alaska Native girls and women by James Poole, a Jesuit priest who worked at that time in Nome, Alaska; and then examined the ways in which the leadership of the Society of Jesus knowingly re-assigned men such as Poole – as well as numerous other men credibly accused of sexual abuse – to other locations within the Oregon Province, and sometimes to locations where they were again credibly accused of abusing children, women and men, and vulnerable adults. Through her research, the reporter further found that many men who were accused of sexual abuse were in their later years assigned to the retirement facility and Infirmary for the Oregon Province, Cardinal Bea House, located just west of St. Aloysius Church.

Listening to this broadcast and reading these accounts is deeply disturbing and elicits for me feelings of sadness, disgust and betrayal that I know must be shared by all of you as well. I feel so much sadness and anger for the women, men and children who were victimized by Poole and others, and all those who have been sexually assaulted by ordained priests who abused their power and privilege. I, together with fellow colleagues and friends of the University, were deeply wounded by the revelations of the sexual abuse of children, men, and women by Jesuits of the Oregon Province that were at the heart of the Province bankruptcy (filed in 2009, with a settlement reached in March 2011).

Those wounds for me were re-opened this weekend, at the revelation that the Society of Jesus had knowingly sent a man with Poole's record of sexual abuse to live in their facility within the parameters of our campus – which serves not only as the home of college students, but regularly hosts grade-school children and visitors of all ages – without notification by the Province to the University. Cardinal Bea House is owned and operated by the Jesuits West Province (i.e., not Gonzaga University). It has served both as a center for formation of Jesuit novices and as a residence for retired Jesuits (until the present). The Province determines the assignment of its Jesuits to its communities, such as Cardinal Bea House.

The last known abusive priest moved out of the Cardinal Bea House in 2016, according to the investigation.

They have since been relocated to the Sacred Heart Jesuit Center in Los Gatos. Former Oregon Province leader Fr. John Whitney said the goal of the relocation is to place priests in more secure and isolated locations.

Whitney, who ordered Poole to move into Cardinal Bea House, said the Jesuit order is obligated to provide for priests in retirement, according to the investigation. He said Cardinal Bea was the only place in the province where past offenders could be “contained effectively” while also receiving medical care.

In a pair of 2005 depositions, Whitney said he did not inform Gonzaga administrators or Spokane police about Poole’s history. A Spokane Police Department spokesperson said he had not received any reports about allegations against any residents of the Cardinal Bea House.

KREM reported on the released of the US Jesuits West list on Dec. 7. The list included priests who served in Arizona, Alaska, California, Hawaii, Idaho, Montana, Nevada, Oregon, Utah and Washington. These men worked at Catholic schools, universities and churches.

Some of the men named have been removed from their positions due to credible claims, died before the claims were made or were convicted for sex crimes.

In a deposition in one of several lawsuits filed against Poole, he said he regularly went to the school library and basketball games, according to the investigation. Poole said he also met with a female student alone in the living room of Cardinal Bea House when she interviewed him for a report on Alaska.

According to the investigation, student journalists and filmmakers were also permitted to interview Joseph Obersinner, who worked in Native communities and was also accused of sexual misconduct against a minor

Fr. Frank Case, head of the Oregon Province, also endorsed Poole for a new position in 1989, according to the investigation. Case is vice president at Gonzaga, adviser to the school’s president and chaplain for the men’s basketball team.

“Poole is a Jesuit priest in very good standing, and it is my strong expectation that he will serve in such a ministry in a manner that is both generous effective,” Case wrote.

Poole got the job and worked at the hospital until 2003, according to the investigation.

In a 2008 deposition, Case said he did not review Poole’s file before writing the letter because he had no indication of misconduct, according to the investigation. Case also said he did not have access to Poole’s personal file.