Sacred Heart is one of the only hospitals in the state that performs the procedure. 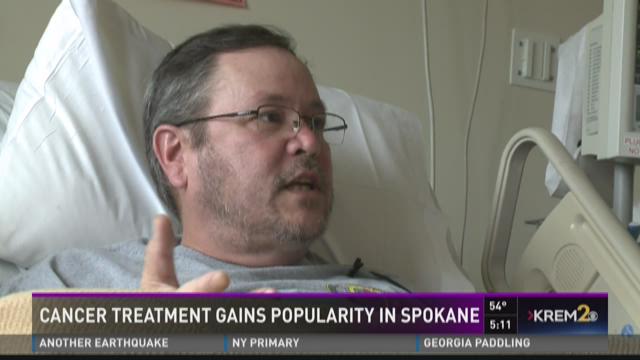 SPOKANE, Wash. -- People from all over Washington state and neighboring states go to Sacred Heart for a very specific stem cell procedure that a lot of cancer patients and their families are very grateful for.

Rickey Rhoades’ hospital room turned into a laboratory on Friday.

“That’s frozen stem cells. They’re going to heat them in that, put them up here and put them in me,” said Rhoades.

Rhoades just returned from Afghanistan, where he served as part of the medical staff on the front lines. But he found himself on the opposite end of the table when he was saying goodbye to a fellow soldier.

“He was saying goodbyes and he gave me a hug. It broke my sternum straight in half and just snapped it,” said Rhoades.

That is when he found out he had a form of cancer called Myeloma.

Dr. Hakan Kaya said Sacred Heart is the only hospital besides Seattle that takes patients who have Myaloma and Lymphoma, and provide what is called an Autologous Stem Cell Transplant.

The procedure uses the patient’s own stem cells taken from their bone marrow, extracted before they undergo treatment. This prevents stem cells from being damaged during chemotherapy.

Kaya said they have seen high success rates among the 200 patients they have treated before. Rhoades is the 201st recipient.

“The only chance to cure it is the stem cell transplant, otherwise regular chemotherapy will not cure it. Sometimes we see young people whose cancer comes back. If they don’t go through this procedure, they will die within months,” said Kaya.

Rhoades will have to wait about five more days to see if the stem cells will start taking effect, bus so far, he is grateful he is in remission.

“It is taxing and it will be for a while, mostly because the damage has already been done with my spine. But, as far as the cancer goes, I’m very excited to be done, in remission, and get that out of the way,” said Rhoades.

1 / 3
Sacred Heart is one of the only hospitals in the state that performs Autologous Stem Cell Transplants.