The Spokane Fire Department has their own types of tools that can also cut laminated glass. This type of glass is being used more often, not only on windshields like it was originally intended for but side windows as well. 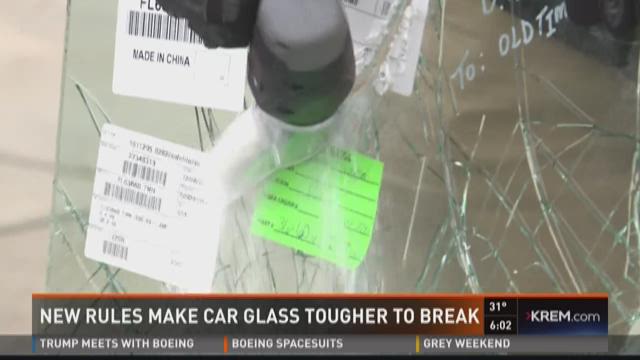 SPOKANE, Wash. -- A new car safety requirement will be in affect later on this year. The U.S. Department of Transportation is requiring new cars to have safety glass in all the side windows.

We saw firsthand the issues this glass can cause of rescuers after video came out of a Spokane police officer trying to break a window to free a woman trapped in her burning car.

Pittsburgh businessman, Al Vangura, gave a demonstration Friday for a special tool that cuts through laminated window glass. He specifically brought the tool to Officer Tim Schwering who pulled Kim Novak through the window of her burning car. The body camera video shows him beating the thick laminated safety glass of her Chevy Malibu. Vangura said his Rhyno glass cutting tool will help if the officer ever finds himself in a similar situation.

“If he was in this situation once again he would come to his car and grab this and grab this tool. You could hit the car, it creates a hole and then you can start cutting,” said Vangura.

Vangura said the tool that retails for $700 is mainly used by emergency responders. The Spokane Fire Department has their own types of tools that can also cut laminated glass. This type of glass is being used more often, not only on windshields like it was originally intended for but side windows as well.

"Previously we had the tempered glass and we could hit that with the punch and it would just go out the problem we had with that was people would get cut up, it would get in their eyes so with the new glass we will have to use a saw of some sort which we carry out on our heavy rescue and we also have a sawzall on almost every one of our engines," said Spokane firefighter Lee Venning.

Firefighters said using a saw can be more time consuming. They said the best option they have is to get a door open if they can. If a rescuer must break out a window tools like these may be more needed than ever.

Come September 1, all new vehicles will have to meet the new ejection mitigation standards set by the National Highway of Transportation Safety Administration. All 2018 cars will have to have safety glass like ones made of laminated glass, on all side windows next to the first three rows of seats and to a portion of the cargo area behind the first and second rows. This rule was passed to try to stop serious injuries and death from people who are ejected from their cars during a roll over crash. This is something local fire fighters have prepared for and are ready for.