Thursday marks one year since a shooter opened fire inside Freeman High School. Now "Jena Rhys" Johansen is prearing to release a music video of her song remembering student Sam Strahan, who was killed during the shooting. 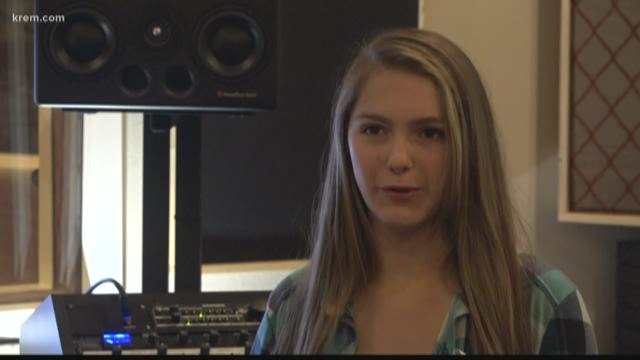 SPOKANE, Wash. — You may remember "Jena Rhys" Johansen, a Central Valley High School student, as the girl who wrote the song that helped the Freeman High School community heal during an incredibly difficult time.

Thursday marks one year since a shooter opened fire inside Freeman High School. Now Johansen is preparing to release a music video of her song remembering student Sam Strahan, who was killed during the shooting.

In the hours and days that followed, students and Freeman staff called Sam a hero for trying to stop the shooter. Today part of Highway 27 is named the The Sam Strahan Memorial Highway. It passes right in front of the school.

Over the past year, Johansen has performed "Remember You" many times at Amplified Wax, a Spokane music studio, but the emotion behind her words never fails.

"It has this meaning to it but just hits home, every single time," said Johansen. "The words are just so deep and just so commanding."

Johansen's brother Caleb is also featured in the song.

"When I play with her, specifically this song, it's like this feeling of joy and grace at the same time. It's a feeling like no other," Caleb Johansen said.

It is a feeling that reached many people, including local producer James Hill.

"With this story, it was terrible, but here is a positive thing and I just felt like we wanted to be a part of that somehow," said James Hill, a music producer at Amplified Wax.

Since the tragedy, Johansen has been working on a music video, along with a way to continue to spread hope and healing.

That is why she is inviting students in the Freeman community to take part.

"When you go through hard experiences, you have to make happy memories to reclaim those places and reclaim those times in your life," Johansen continued.

Johansen and her mom have contacted the Freeman School District to see if this is something it would like students to take part in.

If the school district agrees, they hope to shoot this part of the video soon and release the recorded song and music video during the month of October.

They are hoping that a sponsor can donate supplies for students to decorate the halls, which includes white paper bags and LED lights.

For information and updates on this process or to reach Johansen, click here.